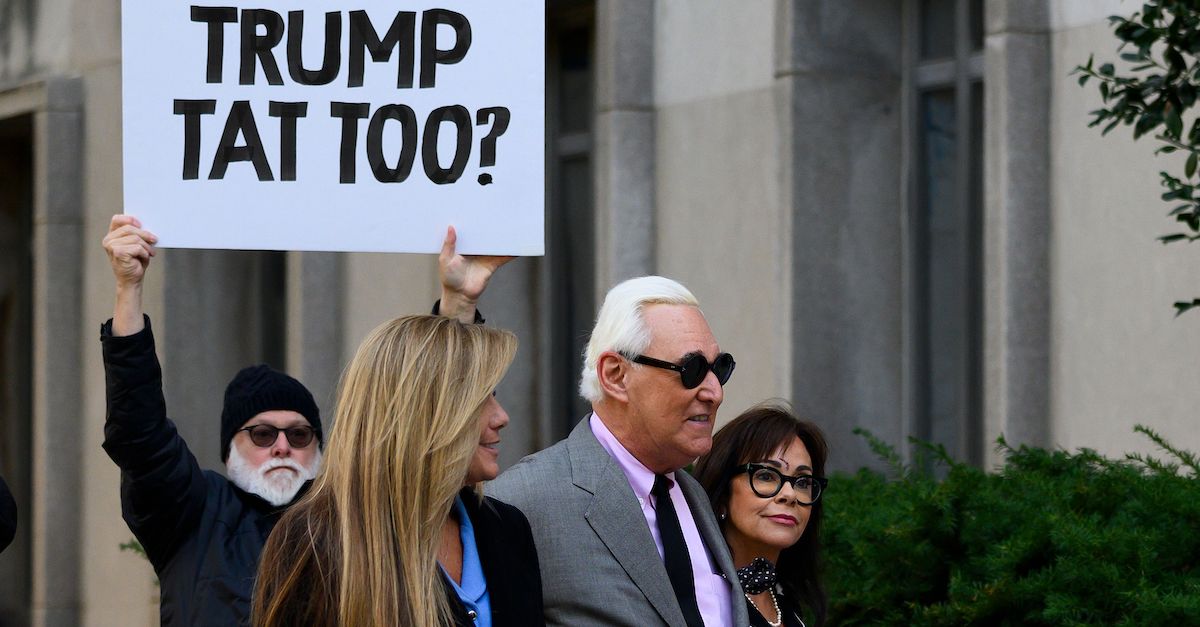 Update, Tuesday afternoon: Not long after the president’s late-night Twitter activity, the DOJ slammed its own prosecutors’ sentencing recommendation in the Roger Stone case.

The DOJ is changing its sentencing recommendation for Roger Stone, according to a Senior DOJ official.
“The Department finds seven to nine years extreme, excessive and grossly disproportionate," the source said, adding the DOJ will clarify its position on sentencing later today

Prosecutors said Roger Stone lied, obstructed, and witness tampered to protect Donald Trump and a jury of Stone’s peers found him guilty on all criminal counts. Prosecutors took into account that criminal conduct plus Stone’s pre-trial conduct and added that up to a rather jarring recommendation: seven to nine years in the slammer.

There’s virtually no way Stone will get a sentence that harsh, but that’s not important right now.

This is a horrible and very unfair situation. The real crimes were on the other side, as nothing happens to them. Cannot allow this miscarriage of justice! https://t.co/rHPfYX6Vbv

“This is a horrible and very unfair situation,” Trump tweeted after 1 a.m. on Tuesday. “The real crimes were on the other side, as nothing happens to them. Cannot allow this miscarriage of justice!

The president does have a pardon formula (see: “unfair”), and this fits the bill.

“He’s done a great job for the people of Arizona. He’s very strong on borders, very strong on illegal immigration. He is loved in Arizona. I thought he was treated unbelievably unfairly.”

“So I am taking this very righteous step, I believe, to correct a wrong that occurred in our history, and to honor a truly legendary boxing champion, legendary athlete, and a person that, when people got to know him, they really liked him and they really thought he was treated unfairly as a human being and unfairly as a champion.”

“[B]ut for years I have heard that he has been treated unfairly.”

When considering out loud a pardon of Martha Stewart, Trump said the same thing.

“I think to a certain extent Martha Stewart was harshly and unfairly treated,” he  said. “And she used to be my biggest fan in the world … before I became a politician. But that’s OK, I don’t view it that way.”

When Trump floated a Rod Blagojevich pardon in the past he said, “Eighteen years in jail for being stupid and saying things that every other politician, you know, that many other politicians say.” In other words, he’s being treated unfairly.

Blagojevich recently penned an op-ed that was seen as an obvious play for a pardon.

Trump’s similar comments about Paul Manafort’s “unfair” prison sentence led people to believe that maybe a pardon was in the offing there, too. That has not come to pass. For a while, the situation was complicated by state charges, but those are out of the way and the path to a pardon is currently clear.

People, regardless of their politics, unanimously interpreted Trump’s Stone tweet as a telegraphing of a pardon.

Stone is being prosecuted by the impeached Trump's own DOJ w/ AG Barr; it would be illegal for a pardon to be exchanged for a potential cooperating defendant's silence/non-cooperation; that would be called a corrupt quid pro quo/bribe; btw, Stone lied about rigging '16 election https://t.co/CCY5cETtxS

Can there be any doubt that a pardon is in the offing? Sheriff Joe was facing only a max of 6 months. Prosecutors are recommending (but won't get) 7 to 9 years for Stone, chiefly due to his outlandish threats to @CredicoRandy https://t.co/k4n5Qrmx7f https://t.co/CUlsJbkCAi

The issue is not will Trump pardon Roger Stone – he will. It's why does Trump surround himself with so many criminals: Roger Stone, Michael Cohen, Michael Flynn, Paul Manafort and others. We know the answer: Criminals like to hang out with criminals. It's that simple

I'm praying that @realDonaldTrump pardons Gen. Michael Flynn and Roger Stone. This is a gross injustice and political attack. https://t.co/cxAb8RKBYU

BREAKING: Trump tweet suggests he may pardon Roger Stone who was previously found guilty of charges including obstruction, lying to Congress, witness tampering, and the attempted murder of Roger Rabbit. pic.twitter.com/bytf9mR1FR

It’s 1AM. Trump is suggesting that he plans to pardon Roger Stone. https://t.co/w6tV4kzHxn

The Roger Stone pardon is coming!

Thank God we have a President who doesn’t cave to the media! https://t.co/7zQAXwrakq

….A double standard like never seen before in the history of our Country?

It should be noted that Randy Credico, the witness Stone tampered with, recently wrote a letter to the judge asking that Stone get no prison time at all. He told Judge Amy Berman Jackson that he didn’t really believe Stone would ever harm him or his dog Bianca.

Stone is “juvenile,” “insecure,” and a conspiracy theorist, but not someone who should do hard time, Credico argued.

Credico wrote that prison is “no remedy” for the above.