Will Mick Mulvaney's Words May Come Back to Haunt Trump? | Law & Crime

Former Federal Prosecutor: I’ve Seen Weak and Desperate Legal Defenses, But ‘Get Over It’ Is a New Low 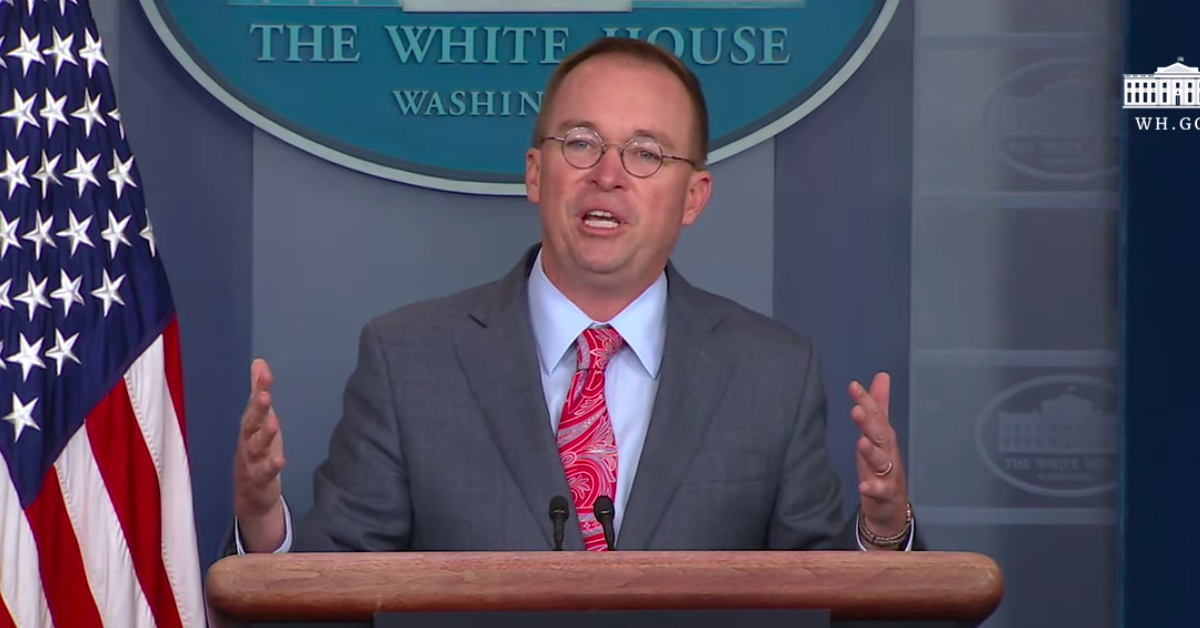 But the holding up of aid for the lattermost reason was “news to” the Department of Justice and everyone else, and Mulvaney’s other remarks regarding the quid pro quo — “We do that all the time with foreign policy” and “Get over it” — sent the news cycle into overdrive. Mulvaney rubbished in one fell swoop the Donald Trump talking point that there was no quid pro quo of any kind relating to the holding up of military aid to Ukraine and the president’s desired political investigations into the Bidens and what happened in 2016. The president discussed both investigations on a July 25 phone call with Ukrainian President Volodymyr Zelensky and asked Zelensky to pursue them. That phone call was the focus of a whistleblower complaint claiming President Trump solicited foreign interference in the 2020 election.

In summary: Mulvaney admitted there was a quid pro quo to exchange military funding for the Ukraine to investigate a conspiracy theory regarding a “missing” DNC server; the DOJ.had no clue holding up of aid was tied to Ukrainian assistance with its investigation; this is the same DOJ that declined to pursue a criminal referral about a potential campaign finance violation following the Ukraine whistleblower’s complaint; Mulvaney tried to walk his comments back, insisting media outlets had misconstrued what he said; Chris Wallace of Fox News wasn’t buying the walk-back.

“You said what you said,” Wallace told Mulvaney on Sunday.

Former federal prosecutor Elie Honig, a CNN legal analyst, apparently agreed with Wallace’s take on Sunday because he, too, believes Mulvaney’s remarks were what they were: a big problem for the White House.

“We saw Mulvaney get behind a microphone and very publicly engage in an act of self-destruction. He admitted there was a quid pro quo, but he told us ‘get over it.’ I’ve seen some weak and desperate legal defenses in my time, but ‘get over it’ I think is a new low,” Honig said on CNN’s Cross-Exam segment. “The White House was not over it. They very quickly walked it back, ran it back, and came up with a spin, ‘Well, Trump’s really about busting up corruption.’ The problem is it’s contrary to facts and reality.”

Honig then explained how and why Mulvaney’s comments may come back to haunt the president.

“Now, can Mulvaney’s statement be used against Donald Trump? Yes, there’s a doctrine in law statement by a party-agent. What that means is I have someone who speaks for me — an attorney or spokesperson or chief of staff — and they say something relating to that relationship. Then yes, it can be used against me,” the former assistant U.S. Attorney for the Southern District of New York continued. “But let’s keep in mind it’s impeachment so the normal courtroom rules of evidence do not apply. Really, the House and Senate can consider whatever they deem appropriate. But I do think Mick Mulvaney’s statement is very much in play and will prove very damaging to Donald Trump.”