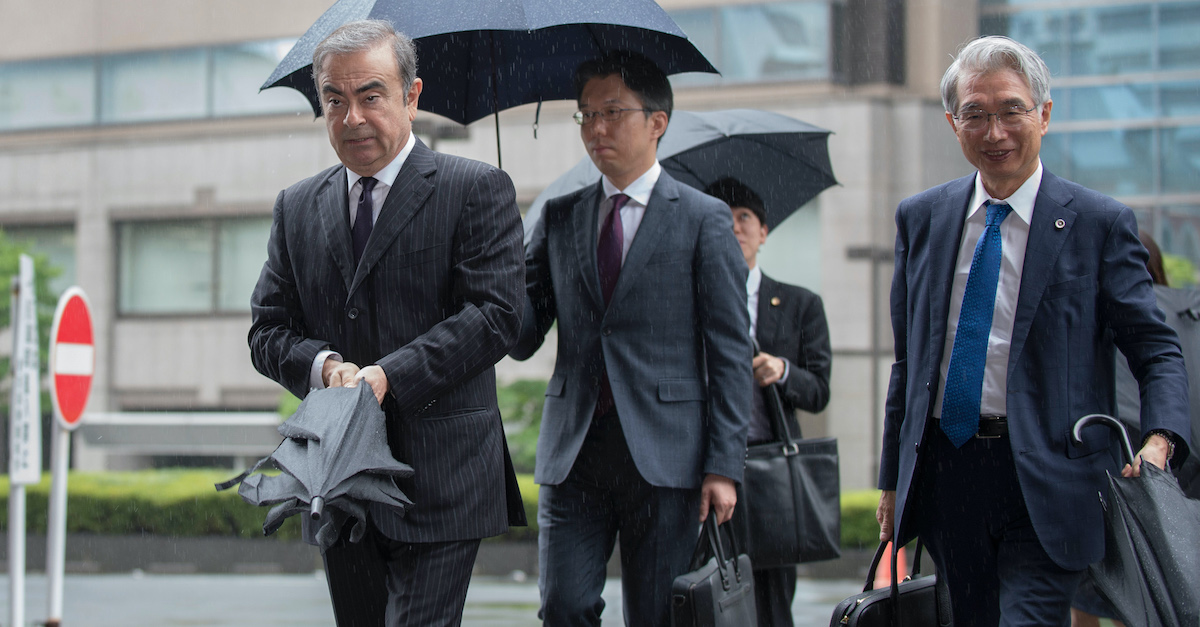 A 65-year-old former automobile industry big-wig with Brazilian, French and Lebanese passports escaped Japan over the weekend by extraordinary means.

Carlos Ghosn, a 5’5″ former top executive for companies like Mitsubishi, Michelin, Renault and Nissan, was facing financial charges at the time he somehow escaped from his constantly surveilled Tokyo apartment to Istanbul, Turkey, wherefrom he managed to make it home to Beirut, Lebanon — a place that does not have an extradition treaty with Japan.

The whole ordeal smacked of cinema from the start, but the Wall Street Journal reported on Friday that men with U.S. passports and names “matching those of American security contractors accompanied […] Ghosn out of Japan after he was slipped aboard a private jet inside a large black case, typically used to carry audio gear.”

One of those names? Michael Taylor. The Journal identified him as a former U.S. Green Beret and private security contractor who in recent years had a run-in with the law himself:

Mr. Taylor more recently served time in a U.S. prison after pleading guilty to a wire-fraud charge stemming from a federal bid-rigging investigation into $54 million in Defense Department contracts. Mr. Taylor through his attorney had disputed the charges, saying he was a legitimate businessman. He was released in December 2015, according to the U.S. Bureau of Prisons inmate locator. The government returned $2 million seized from him, court documents show.

The other name was George Antoine Zayek, a security employee said to be connected to companies owned by Taylor.

After Ghosn was arrested in Nov. 2018, he was in custody of Japanese authorities for 108 days. He was released in March 2019 after posting $9 million bail, then was re-arrested in April on new charges. He posted $4.5 million bail and was restricted from communicating with his wife, Carole.

Months later, he was out of the country, thanks to two consecutive flights, a spare French passport and assistance.

Turkish private jet operator MNG Jet has admitted that it helped former Nissan chairman Carlos Ghosn to escape from Japan – but has blamed a rogue employee for leasing out two of its planes without the knowledge or authorisation of senior management.https://t.co/2ulz5HAFsW

As Law&Crime reported before, Ghosn’s American lawyers were silent on the escape, while his Japanese attorney, Junichiro Hironaka, said he was “shocked” by it all.

“It was an unexpected surprise,” Hironaka said on New Year’s Eve in a video translated by Reuters. “I’m shocked and confused. I’d like to say that’s the situation I am in now. I will let the court know we are baffled regarding this situation. I will provide the court with any information we receive. I personally don’t have any clue how to contact Carlos Ghosn.”

The latest update on Ghosn’s escape provides further insight into how the powerful multinational millionaire was able to evade his around-the-clock surveillance team and then flee the country. One similar theory said that Ghosn escaped in a musical instrument case after a performance by a group of musicians at his apartment.

But that hasn’t been the only theory floated, as WSJ noted:

Kenji Takanishi, a spokesman for the operator of Osaka’s Kansai International Airport, said luggage for private planes goes through the same inspection as passengers’ luggage for regular commercial jets. However, he said VIPs were sometimes exempted from such checks.

“I alone organized my departure,” Ghosn said on Thursday. “My family played no role.”

“I will no longer be held hostage by a rigged Japanese justice system where guilt is presumed, discrimination is rampant, and basic human rights are denied,” he said. “I have not fled justice—I have escaped injustice and political persecution.”

Ghosn was recently seen out with his wife on the streets of Beirut, celebrating his evasion of Japanese authorities.

It seems this story is far from over, however.