For the Second Time This Week, Federal Judge Decides Not to Block Congressional Subpoena 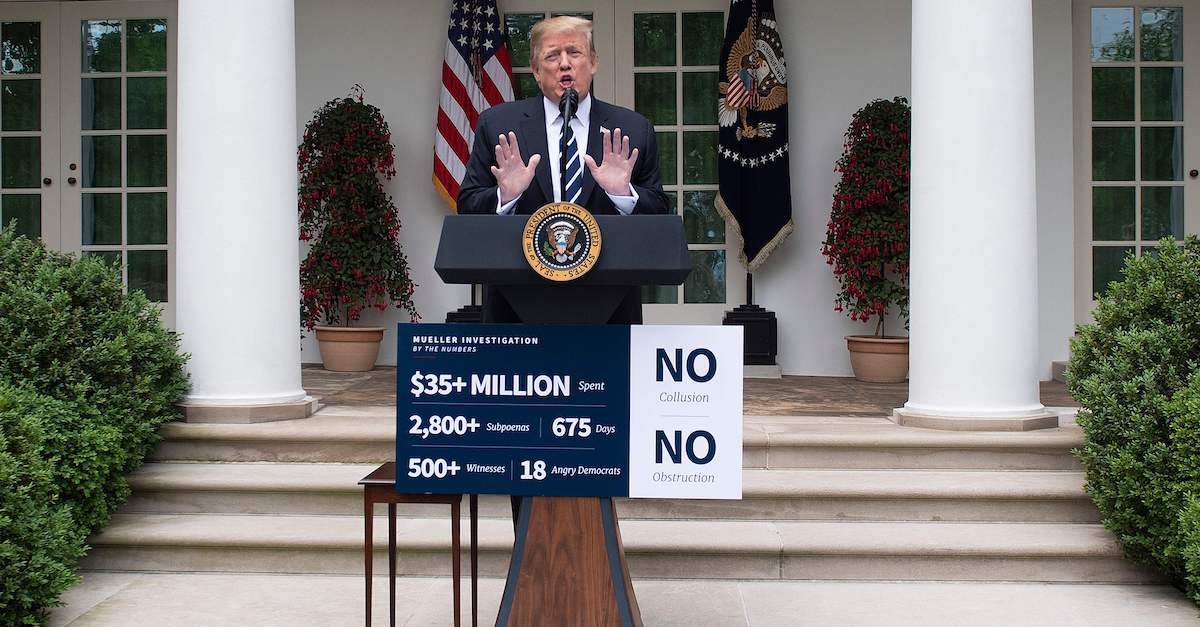 First it was Mazars USA, then it was Deutsche Bank and Capital One.

U.S. District Judge for the Southern District of New York Edgardo Ramos on Wednesday decided that President Donald Trump can’t block the congressional subpoenas issued to Deutsche Bank and Capital One, just days after his D.C. colleague came arrived at the same decision in the Mazars USA case. Trump, of course, sued Mazars USA (his accountant), Deutsche Bank and Capital One after House Democrats demanded that these entities hand over documents related to his finances.

Ramos did suggest early on that the House subpoena might be too broad, but that is a big difference from saying they’re unlawful — which is what Trump lawyers were looking for. The judge asked Trump attorney Patrick Strawbridge if he had asked Democrats to narrow the scope of their demands, and Strawbridge said he would “be happy to do so.”

“If this was an ordinary civil case, I would send you guys into a room […]  until you came out with a reasonable subpoena,” Ramos said.

Douglas Letter, general counsel for the House of Representatives, argued that it’s about time the American people find out of its president or the president’s son-in-law Jared Kushner are beholden to foreign interests and entities.

Notably, Deutsche Bank and Capital One reps were offered an opportunity to comment, but they opted to sit on the sidelines.

“While typically a bank does stand behind its customer, there are two reasons why Deutsche Bank is staying silent. The first, and less obvious, is that when a motion is made to quash (or deny) the subpoena, banks generally sit back to allow the parties to fight and await the result,” Roth said. “But in this instance, the issues are more serious. Essentially, we have a very public dispute between the legislative and executive branches of government, which no bank wants to takes side in.”

Amusingly, per Courthouse News reporter Adam Klasfeld, Ramos took a 10 minute recess and came back with a 25-page opinion — which the judge intended to read in full. 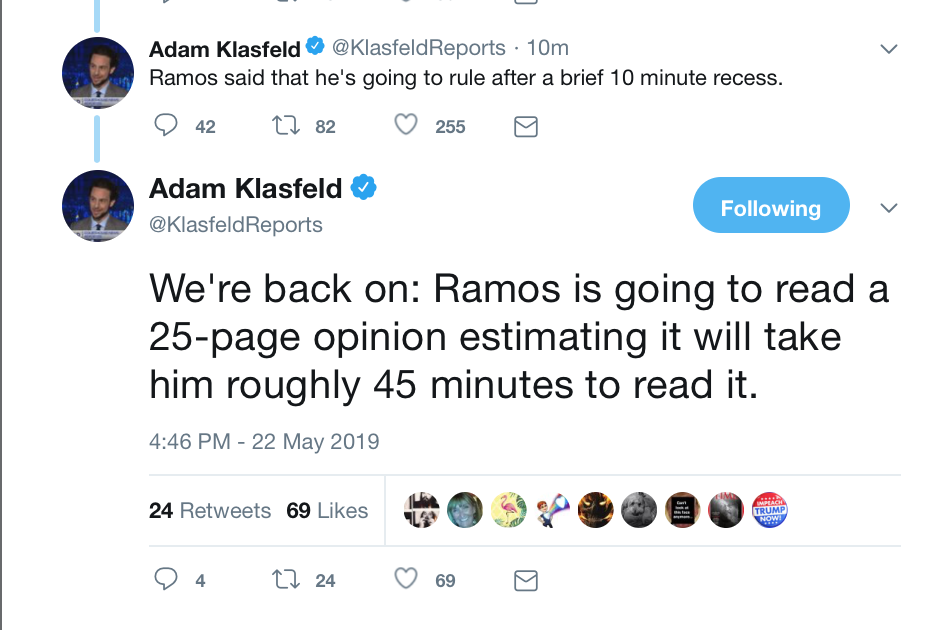 Yet, only a couple of moments later, Ramos got to the point: He would not be issuing a preliminary injunction in this case.

A federal judge refuses to halt a Congressional subpoena to Deutsche Bank and Capitol One for Trump's records. https://t.co/OXEAZr3IRz

Ramos said that Trump et al.’s constitutional claims are unlikely to prevail as, “Without the power to investigate […] Congress could be seriously handicapped in its efforts to exercise its constitutional function wisely and effectively.” Ramos was quoting from this, as Klasfeld noted.

The House Oversight Committee issued the subpoenas after currently incarcerated ex-Trump lawyer Michael Cohen testified before Congress that Trump used “Statements of Financial Condition” to exaggerate the value of his assets. He would allegedly do so by inflating the number of residential units in properties and the number of floors in towers he owned.

As Law&Crime noted before, House Democrats were quick to send U.S. District Judge Amit Mehta‘s ruling on the Mazars USA subpoena the way of Judge Ramos. It’s not hard to see why, when you consider that there were lines like this one: “It is simply not fathomable that a Constitution that grants Congress the power to remove a president for reasons including criminal behavior would deny Congress the power to investigate him for unlawful conduct — past or present — even without formally opening an impeachment inquiry.”

When President Trump criticized Mehta’s decision, he noted that Mehta is an “Obama-appointed judge.” Ramos is also an appointee of former President Barack Obama.

Mehta, in a ruling deemed by some to have been a “tour de force” on this issue, said that “courts must presume Congress is acting in furtherance of its constitutional responsibility to legislate and must defer to congressional judgments about what Congress needs to carry out that purpose.”

“So long as Congress investigates on a subject matter on which ‘legislation could be had,’ Congress acts as contemplated by Article I of the Constitution,” Mehta said. “Applying those principles here compels the conclusion that President Trump cannot block the subpoena to Mazars.”

The House Oversight Committee claims that it needs Trump’s financial records to “aid its consideration of strengthening ethics and disclosure laws, as well as amending the penalties for violating such laws,” and “assist in monitoring the President’s compliance with the Foreign Emoluments Clauses.”

Ramos: "These subpoenas are all in service of facially legitimate investigative purposes."

It is presumed that Trump will attempt to fight this all the way to the Supreme Court.

In the meanwhile, Ramos denied Trump attorneys’ request for a stay pending appeal.

Ramos notes that the plaintiffs will likely appeal and ask for a stay of his ruling, which he concludes.

Strawbridge immediately asks for a stay of his ruling.

"That request is denied," Ramos said.

And, in a follow up bit up news, Deutsche Bank has agreed to abide by the court order.

UPDATE: Deutsche Bank says it will abide by court order compelling it to provide Trump’s financial records to lawmakers