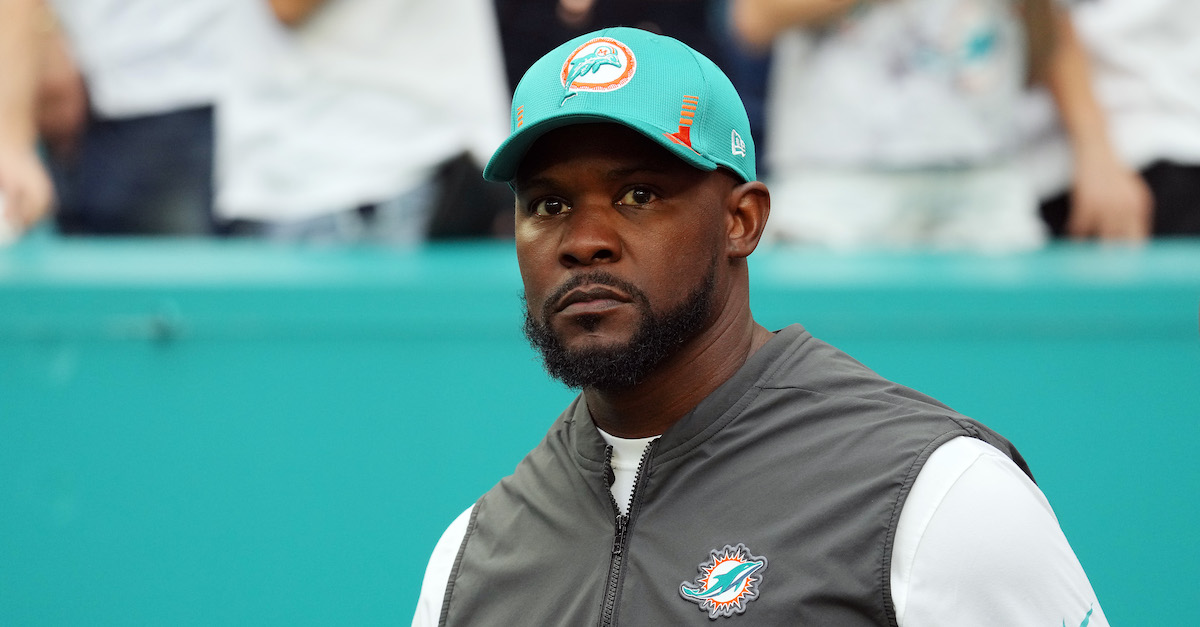 Head coach Brian Flores of the Miami Dolphins takes the field during introductions prior to the game against the New England Patriots at Hard Rock Stadium on Jan. 09, 2022 in Miami Gardens, Florida.

The NFL has long struggled with why a sport that has mostly Black players employs an overwhelming majority of white head coaches, and Flores claimed that his text exchange with Belichick illustrates the NFL’s systemic hiring problem.

“The Need for Change Is Bigger Than My Personal Goals”

Three days before Flores was slated to interview for a job with the New York Giants, the former Dolphins coach said that he accidentally learned the position already had been filled because of a text sent to him in error by Belichick.

“Sorry – I fucked this up,” Belichick wrote to Flores, according to text messages embedded in the lawsuit. “I double checked and misread the text. I think they are naming Brian Daboll. I’m sorry about that. BB.” 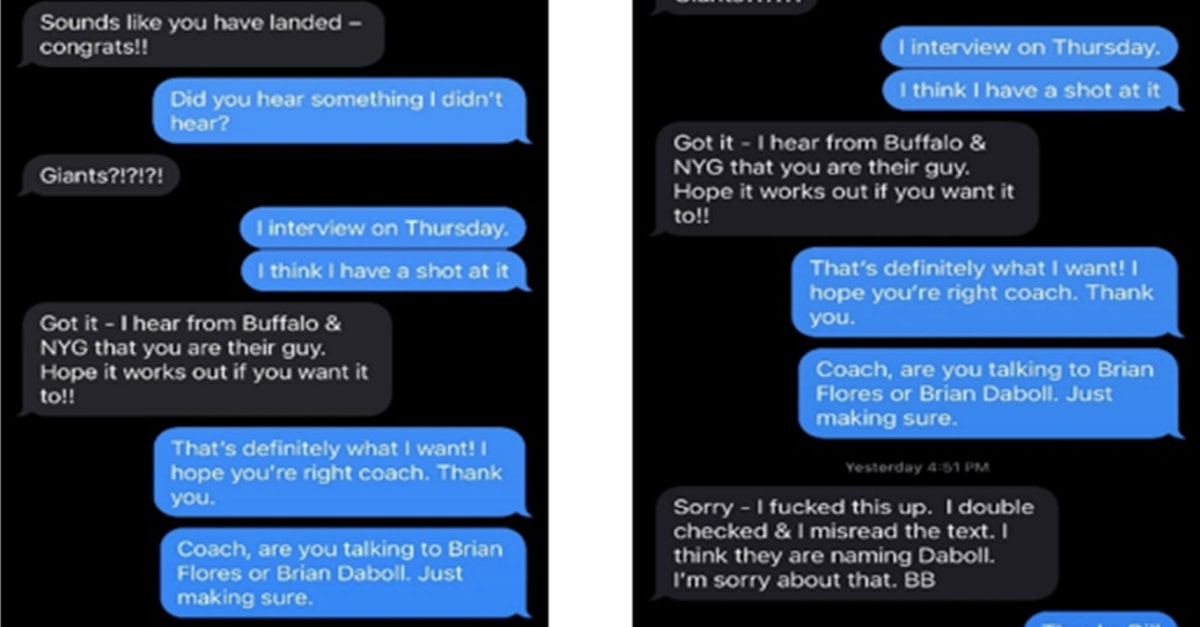 This text exchange between Brian Flores and Bill Belicheck is embedded in the lawsuit.

Daboll, who is white and born in Canada, in fact became the Giants’ head coach last Friday.

On the first day of Black History Month, Flores said that the mix-up was worse than a faux pas. He alleges that the purpose of the interview was to signal to the public that the New York Giants organization would comply with the decades-old Rooney Rule, established to interview two minority candidates in person.

Informed that he was not to become the first Black head coach in the nearly 100-year history of the Giants, Flores claims, he was forced him to sit through humiliating interviews for a job he already knew he would not get.

“Thus, on Wednesday, January 26, 2022, Mr. Flores was forced to sit through a dinner with Joe Schoen, the Giants’ new General Manager, knowing that the Giants had already selected Mr. Daboll,” the lawsuit states. “Much worse, on Thursday, January 27, 2022, Mr. Flores had to give an extensive interview for a job that he already knew he would not get—an interview that was held for no reason other than for the Giants to demonstrate falsely to the League Commissioner Roger Goodell and the public at large that it was in compliance with the Rooney Rule.”

Opening his lawsuit with references to Black icons King, Harriet Tubman, Rosa Parks, Frederick Douglass, Jackie Robinson and Mamie Till, Flores said he hoped his lawsuit would make a difference.

“God has gifted me with a special talent to coach the game of football, but the need for change is bigger than my personal goals,” Flores said in a statement. “In making the decision to file the class action complaint today, I understand that I may be risking coaching the game that I love and that has done so much for my family and me. My sincere hope is that by standing up against systemic racism in the NFL, others will join me to ensure that positive change is made for generations to come.”

The NFL released a statement asserting that they are “deeply committed to ensuring equitable employment practices and continue to make progress in providing equitable opportunities throughout our organization.”

“Diversity is the core of everything we do, and there are few issues on which our clubs and our internal leadership team spend more time,” the statement continues. “We will defend against these claims, which are without merit.”

For Flores, it was part of a string of slights by the league in a job where he was excellent. Flores even alleged that Stephen Ross, the Dolphins owner who fired him, offered him money to “tank” games in 2019:

In January 2022, Mr. Flores, who spent three years as the Head Coach of Defendant Miami Dolphins, Ltd. (the “Dolphins” or “Miami”), found himself without a job. He was fired by the Dolphins after leading the team to its first back-to-back winning seasons since 2003. The purported basis for his termination was alleged poor collaboration. In reality, the writing had been on the wall since Mr. Flores’ first season as Head Coach of the Dolphins, when he refused his owner’s directive to “tank” for the first pick in the draft. Indeed, during the 2019 season, Miami’s owner, Stephen Ross, told Mr. Flores that he would pay him $100,000 for every loss, and the team’s General Manager, Chris Grier, told Mr. Flores that “Steve” was “mad” that Mr. Flores’ success in winning games that year was “compromising [the team’s] draft position.”

Stunning many, Flores was fired after leading the Dolphins in back-to-back winning seasons, and he said that the league stigmatized him as an “angry black man” for the aggressive features applauded in his white counterparts.

“In certain critical ways, the NFL is racially segregated and is managed much like a plantation,” the 58-page lawsuit states. “Its 32 owners—none of whom are Black—profit substantially from the labor of NFL players, 70% of whom are Black. The owners watch the games from atop NFL stadiums in their luxury boxes, while their majority-Black workforce put their bodies on the line every Sunday, taking vicious hits and suffering debilitating injuries to their bodies and their brains while the NFL and its owners reap billions of dollars.”

“Many players desire to coach for their post-playing careers. Others desire to work their way into management-level positions at one of the NFL’s 32 Teams,” the suit continues. “Unfortunately, for Black individuals, that is easier said than done.”

According to the lawsuit, only one of the league’s teams employs a Black head coach (Mike Tomlin has been the head coach of the Pittsburgh Steelers since 2007). 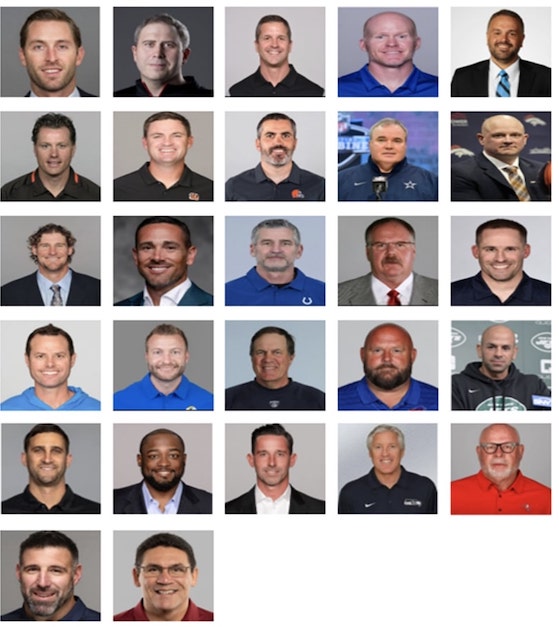 According to the lawsuit, these are all of the NFL’s head coaches. Only one of them is Black.

The proposed class includes “All Black Head Coach, Offensive and Defensive Coordinators and Quarterbacks Coaches, as well as General Managers, and Black candidates for those positions.”

“On the first day of Black History Month, it is our great privilege to represent Brian Flores in his class action complaint against the NFL,” they wrote in a statement. “This case seeks to level the playing field in the hope that future owners and coaches will be representative of the athletes who are playing this great game. We fully expect coaches and players of all races to support Brian as he embarks on his journey to create positive change.”

Filed in the Southern District of New York, the lawsuit seeks a federal court injunction increasing the influence of Black people in hiring and termination decisions.

It also proposes ensuring diversity of ownership by creating and funding a committee dedicated to sourcing Black investors to take majority ownership stakes in NFL Teams—and permitting select Black players and coaches to participate in the interviewing process for general manager, head coach and offensive and defensive coordinator positions.

In statement, the New York Giants said: “We are pleased on confident with the process that resulted in the hiring of Bill Daboll. We interviewed a diverse group of candidates. The fact of the matter is, Brian Flores was in the conversation to be our head coach until the eleventh hour. Ultimately, we hired the individual we felt was most qualified to be our head coach.”

Update—Feb. 1 at 6:47 p.m. Eastern Time: This story has been updated to include the NFL’s response to the lawsuit.