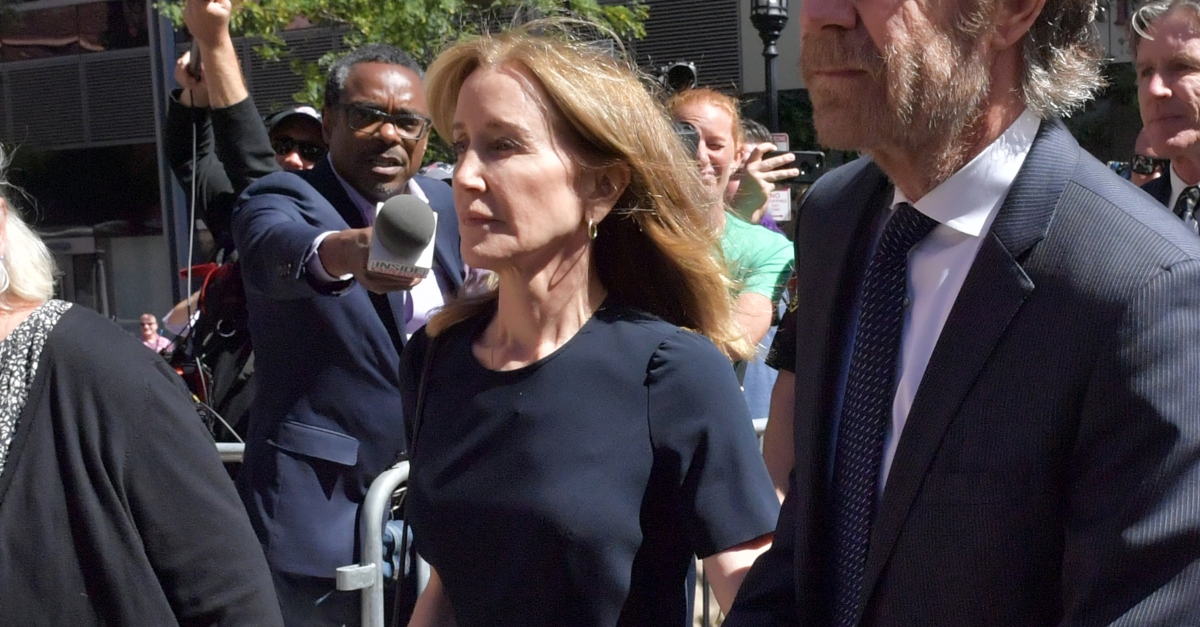 Desperate Housewives actress Felicity Huffman, who was sentenced to 14 days in prison for her role in the college admissions scam, has reportedly been released after 11 days behind bars.

NBC News has confirmed this.

Huffman pleaded guilty to conspiracy to commit mail fraud and honest services mail fraud, a sentence that U.S. Attorney Andrew Lelling recently called “reasonable.” She was one of the wealthy parents charged for shelling out money to William “Rick” Singer, the CEO of a college prep company The Key, to improperly grease the wheels, and help their children get into college. In Huffman’s case, she paid Singer $15,000 in bribes for a test proctor to fix her daughter’s SAT exam answers.

Prosecutors said Huffman was one of the “least culpable” defendants.

“In my desperation to be a good mother, I talked myself into believing that all I was doing was giving my daughter a fair shot,” Huffman wrote the judge in a letter back in September. “I see the irony in that statement now because what I have done is the opposite of fair. I have broken the law, deceived the educational community, betrayed my daughter, and failed my family.”

Huffman served that sentence at Federal Correctional Institution in Dublin, California, which is known as “Club Fed.” A snapshot of the conditions at “Club Fed”:

The inmates also get to watch movies on weekdays at 11 a.m. and 5 p.m, play board games and partake in fitness activities and pass their time participating in “recreation and leisure” activities such as arts and crafts and various sports teams.

Meals include the likes of fruit, cereal, and bread and jelly for breakfast, sandwiches, steamed rice, and a dessert for lunch, and beef with black beans, potatoes, corn and gravy for dinner, according to Good Morning America.

Huffman’s stay in prison was long enough for her to be photographed in a green prison jumpsuit.

Felicity Huffman seen in her prison uniform for the first time https://t.co/4eRL2RBjan pic.twitter.com/S9a9O7jknG

It was recently reported that Huffman’s fellow actress Lori Loughlin was interested in hearing from Huffman about her prison experience. According to People, a source “close to” Loughlin said that Loughlin attempted to reach out to Huffman before she reported to prison because she “wanted to encourage her, and see how she was doing.”

“She feels like their fates are tied together now, even though they weren’t really friends before,” the anonymous person continued. But Loughlin supposedly also wants to hear from Huffman about what life behind bars is like.

“She wants to debrief Felicity after jail to find out what it was like and what her advice would be. She feels like Felicity’s time in jail will be an indicator on her own time, and she’s extremely curious to know how it goes,” the person said. “She’s definitely hoping that Felicity’s time in prison will go easy for her, because that will be a positive sign that, if Lori has to serve time, that she’ll be able to weather it as well. Of course, it’s still very important for her to be exonerated of all charges against her. She still maintains her innocence, and hopes it won’t come to that. But if she does end up serving time in prison, she wants to know what she’s getting into.”

Prosecutors this week piled on Loughlin and her husband Mossimo Giannulli, adding new bribery charges. It was a move that legal experts called an overreach and a “shake-down.”