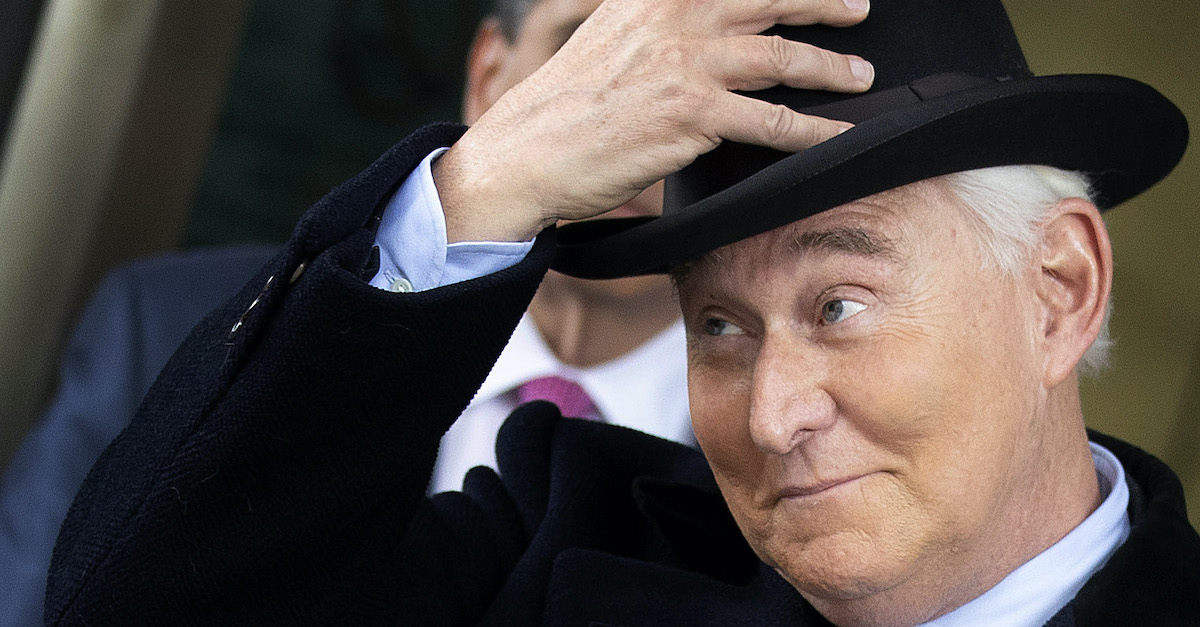 A federal court issued a brief order on Wednesday afternoon in an apparent attempt to make sure that Attorney General Bill Barr’s DOJ isn’t exerting improper influence over prison stint of President Donald Trump’s longtime confidant and political advisor Roger Stone. The order just so happened to come down on the same day so-called whistleblowers testified about the DOJ’s controversial intervention in Stone’s sentencing recommendations.

U.S. District Judge Amy Berman Jackson advised the Department of Justice (DOJ) to come prepared in a filing due Thursday with some sort of precedent in the district–or by way of an agency internal policy–that would support delaying the start of Stone’s imprisonment any further.

“The government’s submission on June 25, 2020 should direct the Court to any existing DOJ or USAO-DC policies concerning responding to defendants’ requests to voluntarily surrender or to delay surrender dates in light of COVID-19, and it should indicate how it has responded to similar motions in other cases,” the minute order says.

Essentially, the judge overseeing Stone’s case believes the government is likely to side with a recent Stone request to delay imprisonment due to the pandemic, but wants to get the D.C. U.S. Attorney’s Office on the record and in writing in order to assess whether or not the government is treating Stone differently from others who have made similar requests. The judge previously ordered Stone to report to prison by June 30.

On Tuesday, Stone’s attorneys submitted a request to delay their client’s prison reporting date until September based on “the exceptional circumstances arising from the serious and possibly deadly risk he would face in the close confines of a Bureau of Prisons [BOP] facility, based on his age and medical conditions” due to the novel Coronavirus (COVID-19) pandemic–which is of particular concern in the nation’s largely decrepit and mismanaged federal prison system.

“Those medical conditions make the consequences of his exposure to the COVID-19 virus in a prison facility life-threatening,” Stone’s motion notes. “The threat of exposure, given the current status of COVID-19 within BOP facilities and the lack of testing, is compelling.”

On Wednesday, Judge Jackson issued a minute order which required the government to “file a submission setting forth its position” on Stone’s request. That order also directed the government to “inform the Court of the results of the COVID-19 tests” at the prison where Stone is scheduled to serve his sentence “that were described in [Stone’s] motion as pending at the time it was filed.”

Stone’s motion to delay his incarceration acknowledges that Judge Jackson has already foreclosed against using a “generalized description of the risk that the COVID-19 virus poses” to federal prisoners in order to keep would-be inmates outside of their eventual cages and cites some recent testing data to make its case.

“While the BOP website currently does not show any inmates with the COVID-19 virus at [the facility in question], it reports that there are 25 tests pending,” the filing went on. “Given that the BOP does not routinely test inmates, combined with the relatively high positivity results in BOP facilities, the pending tests do not bode well.”

Stone himself has been a bit more forthright in his estimation of what potentially awaits him if he’s imprisoned amid the pandemic.

“I’m fighting for my life,” he said in a recent video posted on Instagram. “Incarceration at a facility with COVID-19 during a pandemic is a deep state death sentence. Roger Stone did nothing wrong. Justice for Roger Stone.”