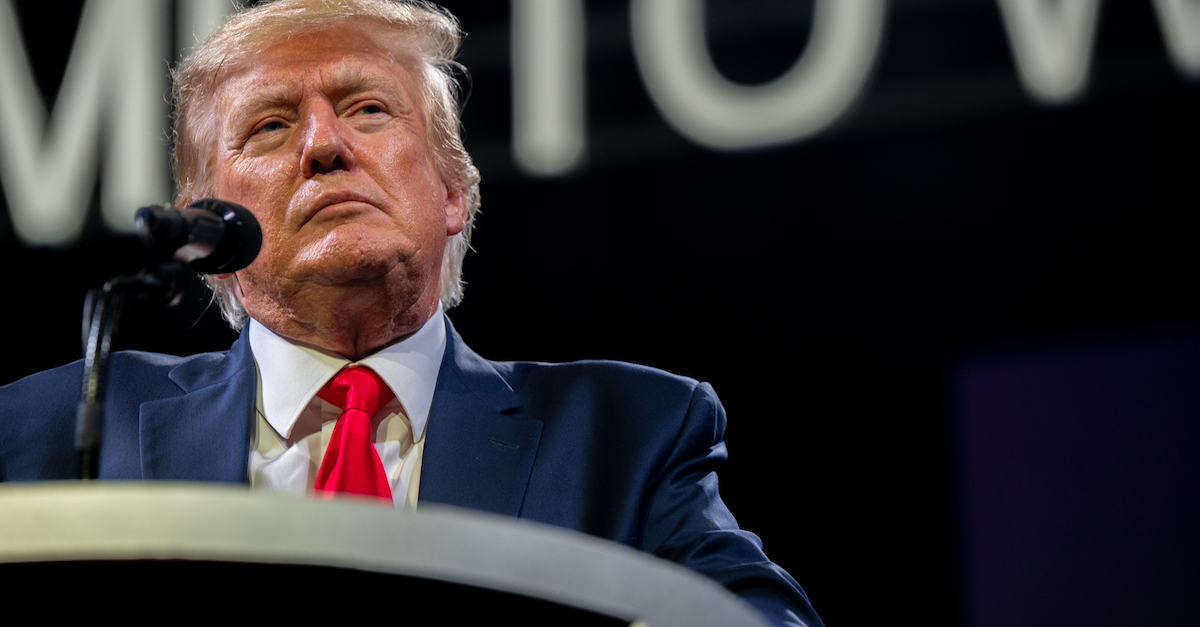 Former U.S. President Donald Trump speaks during the American Freedom Tour at the Austin Convention Center on May 14, 2022 in Austin, Texas.

Former President Donald Trump announced on Monday that federal authorities executed a search warrant on his Mar-a-Lago resort in Palm Beach, Florida, writing in a statement that it’s “currently under siege, raided, and occupied by a large group of FBI agents.”

“Nothing like this has ever happened to a President of the United States before,” Trump noted in a lengthy statement, accurately. “After working and cooperating with the relevant government agencies, this unannounced raid was not necessary or appropriate.”

His attorney Alina Habba did not immediately respond to Law&Crime’s email requesting comment. The FBI declined to comment.

Former federal prosecutor Mitchell Epner, who is now a partner at Rottenberg Lipman Rich PC, emphasized that the development marks a first in American history — and signals several things.

If the FBI executed a search warrant, it must be supported by probable cause of evidence that satisfied a federal judge, Epner continued.

“Having sought a search warrant, there is some place — currently under seal — an affidavit that lays out what crimes the DOJ believes are committed, and why there is probable cause to believe that evidence of that crime or crimes would be found at Mar-a-Lago,” he said. “And that affidavit was convincing to either a United States magistrate judge or a United States district judge, who issued the warrant on the basis of that affidavit.”

Though the basis of the search is currently unknown, a federal judge previously found, in a civil case involving Trump’s lawyer John Eastman, that both Trump and his attorney “more likely than not” committed two crimes: obstruction of an official proceeding and conspiracy to defraud the United States.

In February, the National Archives reportedly asked the Justice Department to investigate Trump’s delays in returning 15 boxes of materials from his Mar-a-Lago residence to the government — only under the threat of legal action.

According to the Washington Post, some of the notable documents that the National Archives recovered included what Trump described as “love letters” with North Korean dictator Kim Jong Un. Trump also reportedly retained a letter that his predecessor Barack Obama left for him.

The newspaper said that NARA also retrieved a map of Hurricane Dorian’s path that Trump altered a black magic marker to match his previous public statements, a scandal that came to be known as “Sharpiegate.” The episode came to Trump’s pressure on government scientists — in that case, inside the National Oceanic and Atmospheric Administration.

Even though he blamed the search on his home on “Radical Left Democrats,” Trump picked the current FBI director, Christopher Wray.