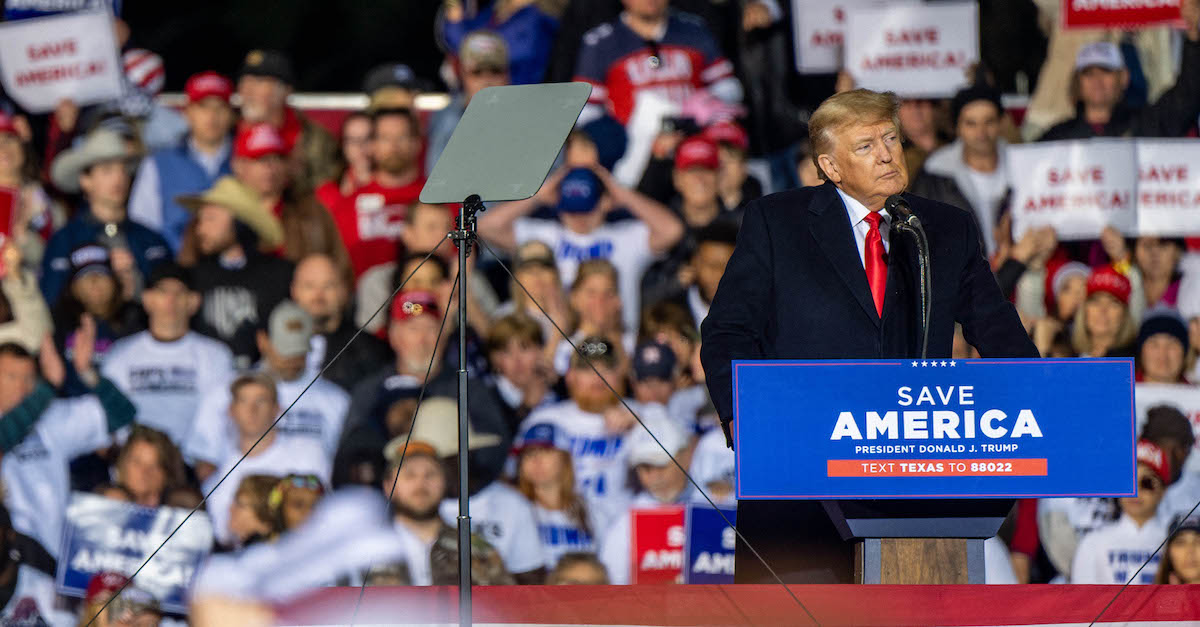 CONROE, TX – JANUARY 29: Former President Donald Trump pauses while speaking during the ‘Save America’ rally at the Montgomery County Fairgrounds on Jan. 29, 2022 in Conroe, Texas.

As first reported by the Washington Post, NARA’s referral came amid reports that officials recovered 15 boxes of materials from Trump’s Mar-a-Lago residence in Florida that should have been returned to the government. Trump reportedly had torn up other White House records, leading officials to suspect that he may have violated laws governing the handling of government documents, according to two of the Post’s sources.

Several other news organizations have since matched that reporting, including ABC and NBC.

NARA would not respond in any official capacity.

“We do not comment on potential or ongoing investigations,” the agency wrote in an unsigned email.

As the Post noted, Trump’s purported penchant for destroying government records was first reported nearly four years ago in a Politico report titled “Meet the guys who tape Trump’s papers back together.” The article memorably began with a profile of a $65,969-a-year salaried records management analyst, said to have been armed with rolls of clear Scotch tape, putting reams of shredded paperwork back together “like a jigsaw puzzle.”

The House Select Committee to Investigate the Jan. 6 Attack on the U.S. Capitol renewed interest in Trump’s document retention practices, after the former president lost his high-stakes battle to prevent the Archivist from complying with the panel’s probe. NARA quickly began sending the requested files after the Supreme Court rejected Trump’s appeal last month on Jan. 19.

NARA reportedly recovered a host of notable documents from the Trump presidency.

According to the Post, they included what Trump described as “love letters” with North Korean dictator Kim Jong Un, as well as a letter that Trump’s predecessor Barack Obama left for him. NARA also reportedly retrieved the notorious artifact of the so-called “Sharpiegate” scandal: a map of Hurricane Dorian’s path that Trump altered a black magic marker to match his previous public statements—prompting turmoil inside the National Oceanic and Atmospheric Administration.

Trump’s attorney Alina Habba, who has represented him in New York Attorney General Letitia James’s investigation into the former president’s business dealings, did not immediately respond to a request for comment.

James is helping the Manhattan District Attorney’s office probe that led to the tax fraud indictment of the Trump Corporation and its former CFO Allen Weisselberg, a close associate of the former president.

Trump is also under investigation for his efforts to try to overturn the results of his 2020 electoral defeat in Georgia.