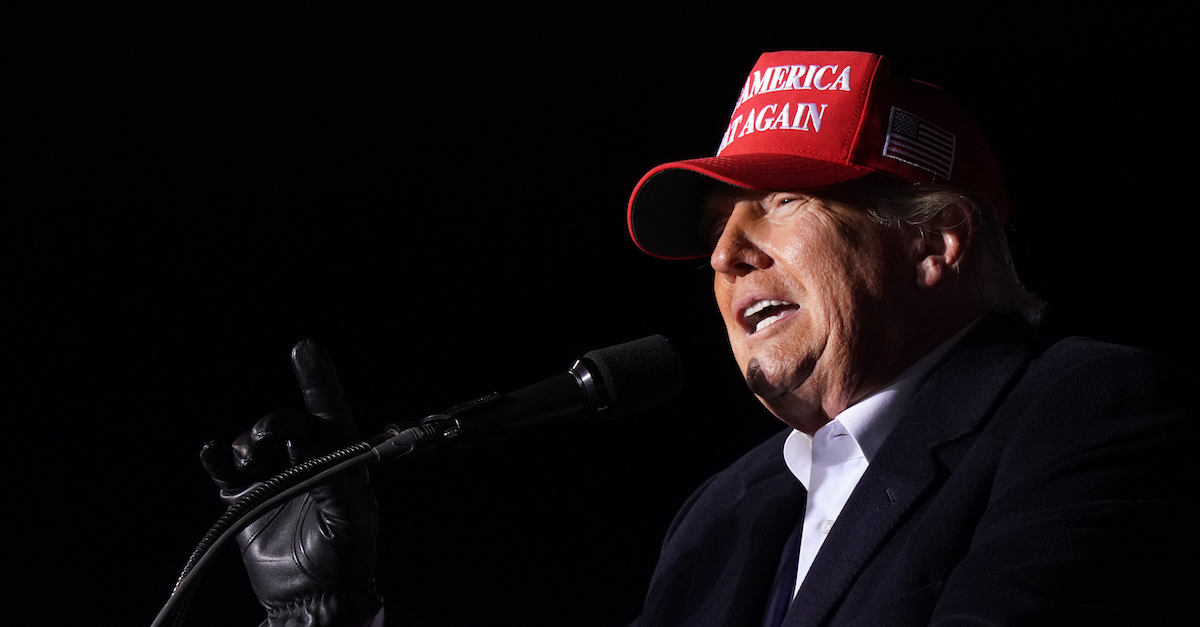 Former US President Donald Trump speaks to the crowd during a rally at the Florence Regional Airport on March 12, 2022 in Florence, South Carolina.

Former President Donald Trump “more likely than not” tried to “corruptly” obstruct the congressional certification of the 2020 election, a federal judge found on Monday. The determination allows the committee investigating the Jan. 6 attack on the U.S. Capitol to obtain more than 100 previously guarded communications, in a ruling invoking the crime-fraud exception under a felony statute routinely charged against accused rioters.

The ruling does not fall under any criminal proceeding but rather in a discovery battle filed by so-called “coup memo” author, lawyer, and former law professor John Eastman in the Central District of California. Eastman had been fighting to preserve 111 emails from his tenure as dean at Chapman University. The communications at issue were from between Nov. 3, 2020 and Jan. 20, 2021, between Election Day and President Joe Biden’s inauguration.

Earlier this month, the Committee to Investigate the Jan. 6 Attack on the U.S. Capitol tried to overcome Eastman’s assertions of privilege through the crime-fraud exception, outlining three theories of allegedly illegal conduct by Trump and Eastman: obstruction of an official proceeding, conspiracy to defraud the United States, and common law fraud.

Finding the first two theories plausible, U.S. District Judge David O. Carter did not see a need to reach the final theory. Carter also found that the evidence “clearly supports” an attorney-client relationship between Eastman and Trump and his campaign between Jan. 4 and 7, 2021. But the judge, citing Eastman’s remark “we’re no longer playing by Queensbury Rules,” found that the lawyer explicitly envisioned going beyond the boundaries of law and norms in urging former vice president Mike Pence to engage in what he called a “minor violation” of the Electoral Count Act.

“The illegality of the plan was obvious,” Carter wrote in a scathing 44-page order. “Our nation was founded on the peaceful transition of power, epitomized by George Washington laying down his sword to make way for democratic elections. Ignoring this history, President Trump vigorously campaigned for the Vice President to single-handedly determine the results of the 2020 election. As Vice President Pence stated, ‘no Vice President in American history has ever asserted such authority.’ Every American—and certainly the President of the United States—knows that in a democracy, leaders are elected, not installed. With a plan this ‘BOLD,’ President Trump knowingly tried to subvert this fundamental principle.”

“Based on the evidence, the Court finds it more likely than not that President Trump corruptly attempted to obstruct the Joint Session of Congress on January 6, 2021,” added Carter, a Bill Clinton appointee.

Of the 111 emails at issue in the civil proceeding, Carter gave the committee the green light to scrutinize 101. The remainder, the judge found, were “entirely non-substantive.” They even included a blank page, which Eastman wanted to protect, according to the ruling. The judge emphasized that his purview was limited in the civil lawsuit, but he ended his ruling with a flourish.

“Dr. Eastman and President Trump launched a campaign to overturn a democratic election, an action unprecedented in American history. Their campaign was not confined to the ivory tower—it was a coup in search of a legal theory. The plan spurred violent attacks on the seat of our nation’s government, led to the deaths of several law enforcement officers, and deepened public distrust in our political process.

“More than a year after the attack on our Capitol, the public is still searching for accountability. This case cannot provide it. The Court is tasked only with deciding a dispute over a handful of emails. This is not a criminal prosecution; this is not even a civil liability suit. At most, this case is a warning about the dangers of ‘legal theories’ gone wrong, the powerful abusing public platforms, and desperation to win at all costs. If Dr. Eastman and President Trump’s plan had worked, it would have permanently ended the peaceful transition of power, undermining American democracy and the Constitution. If the country does not commit to investigating and pursuing accountability for those responsible, the Court fears January 6 will repeat itself.”

Attorneys for Trump and Eastman did not immediately respond to emails requesting comment.