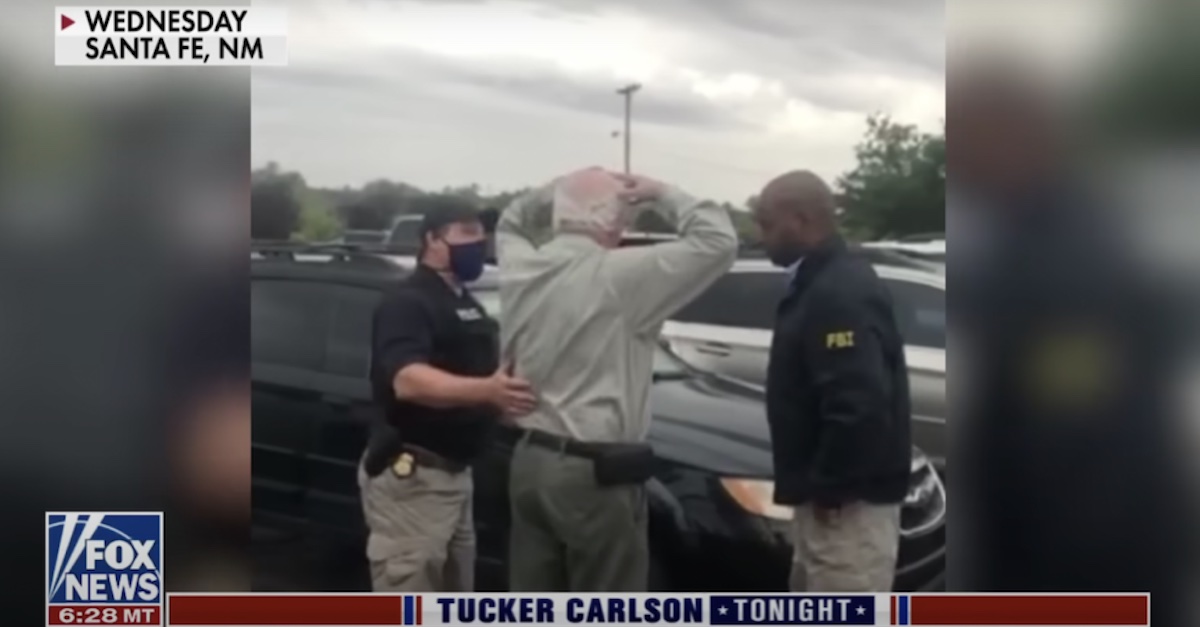 Federal prosecutors say former President Donald Trump’s attorney John Eastman has no legal basis to oppose the search of his seized cellphone, writing in a new filing on Monday that his request in U.S. District Court in New Mexico is for the “destruction of evidence obtained by the Government.”

Eastman’s request, according to the 24-page opposition, “goes beyond even suppression from use at trial to encompass a complete purge of the documents from the Government’s investigatory files.”

“Such an unprecedented purge would cause substantial detriment to the investigation, as well as seriously impede any grand jury’s use of the seized material in a future charging decision,” according to the filing from Assistant U.S. Attorneys Thomas Windom and Mary Dohrmann in Washington, D.C. “The law does not support such action.”

They dismissed Eastman’s argument that the public interest in the case is with not allowing unconstitutional law enforcement searches, saying he’s “shown neither a breach of attorney-client privilege nor an unconstitutional search.”

“To the contrary, the public’s interest lies in allowing the Government’s investigation to proceed without the unprincipled and unfounded interference of the movant,” Windom and Dohrmann wrote.

The opposition follows prosecutors stating on July 27 that they’d obtained a second search warrant regarding Eastman’s two weeks earlier. The warrant allowed them to search the contents of the phone, while the original warrant allowed for the search of Eastman and seizure of his phone.

Eastman is the one who announced his phone had been seized, filing a motion for a temporary restraining order in U.S. District Court in New Mexico on June 27.

Senior U.S. District Judge Robert C. Brack rejected Eastman’s temporary restraining order request but said he was “was relying to a considerable extent on the assertion in the warrant that the investigative team will not examine the contents of the phone until it seeks a second warrant.” Brack ordered the U.S. Department of Justice to tell him where the phone is and whether they’d applied for a second warrant, which led to the July 27 filing.

Monday’s filing is the DOJ’s full written argument against Eastman’s request for an injunction, which Brack is to consider at a hearing scheduled Sept. 6. in Albuquerque.

It responds to Eastman’s amended motion on July 8, saying he hasn’t met “the heavy burden the movant must meet to obtain a preliminary injunction.” They referenced Eastman’s argument that the only solution is for his phone to be returned and a judge to order federal official to to “destroy any information that has already been retrieved or copied from the device” and said it “goes beyond even suppression from use at trial to encompass a complete purge of the documents from the Government’s investigatory files.”

They also said his true intent is simply to prevent “the Government from using evidence lawfully obtained” through two search warrants. The first was the warrant authorized in the District of New Mexico by U.S. Magistrate Judge Laura Fashing that allowed for the search of Eastman and the seizure of the phone. The second is the warrant obtained on July 12 in the District of Columbia that authorized forensic searches of the phone.

Eastman included a copy of the first with his initial motion. The second wasn’t made known until July 27 when the DOJ responded to Brack’s July 15 order that gave them two weeks to disclose whether they’d gotten a warrant for the contents of the phone. It has not been filed publicly in either the District of New Mexico or the District of Columbia.

In the two-page July 27 notice, Windom wrote that Eastman’s phone “as well as a manual screen capture of certain contents of the device obtained by an agent not associated with the investigation team” are with the Department of Justice’s Office of the Inspector General in Northern Virginia.

They also said their warrant for the phone’s contents includes “a filter protocol, which has been provided to Plaintiff’s counsel,” referring to the DOJ’s well-established privilege-review team process, which involves assigning employees not involved in the criminal investigation to search through seized evidence for material that’s privileged by way of attorney work product or client privileges.

The evidence deemed not privileged is provided to case investigators and prosecutors, but privileged material can also be released under exceptions such as the crime-fraud exception, which means the otherwise privileged material was used in furtherance of a crime or to otherwise defraud. It’s already been a huge headline grabber in Eastman’s situation, with U.S. District Judge David O. Carter in Santa Ana, California, applying it to two otherwise privileged documents from Eastman’s Chapman University email accounts and in the process writing a detailed analysis of crimes he said Eastman and Trump “more likely than not” committed.

The presence of the Office of Inspector General in the New Mexico search of Eastman was first revealed in the initial warrant that Eastman filed wile trying to get his phone back. As the office only investigates DOJ employees, it indicates a probe beyond only Eastman, with the seizure of his phone in June occurring the same week federal agents searched the Virginia home of Jeffrey Clark, a former top Trump DOJ official and key election conspiracy theorist.

The DOJ lawyers said Eastman’s motion “suggests” that Inspector General investigations “cannot involve evidence obtained from a person outside the Department of Justice.”

“As a matter of common sense, he is incorrect: an investigation of wrongdoing by one individual routinely involves obtaining evidence from others, particularly in cases involving conspiracies,” they wrote.

Scheduled in an order set by Judge Brack, Monday’s opposition was filed about the same time news was spreading of an FBI raid at Trump’s Mar-a-Lago residence in Florida.