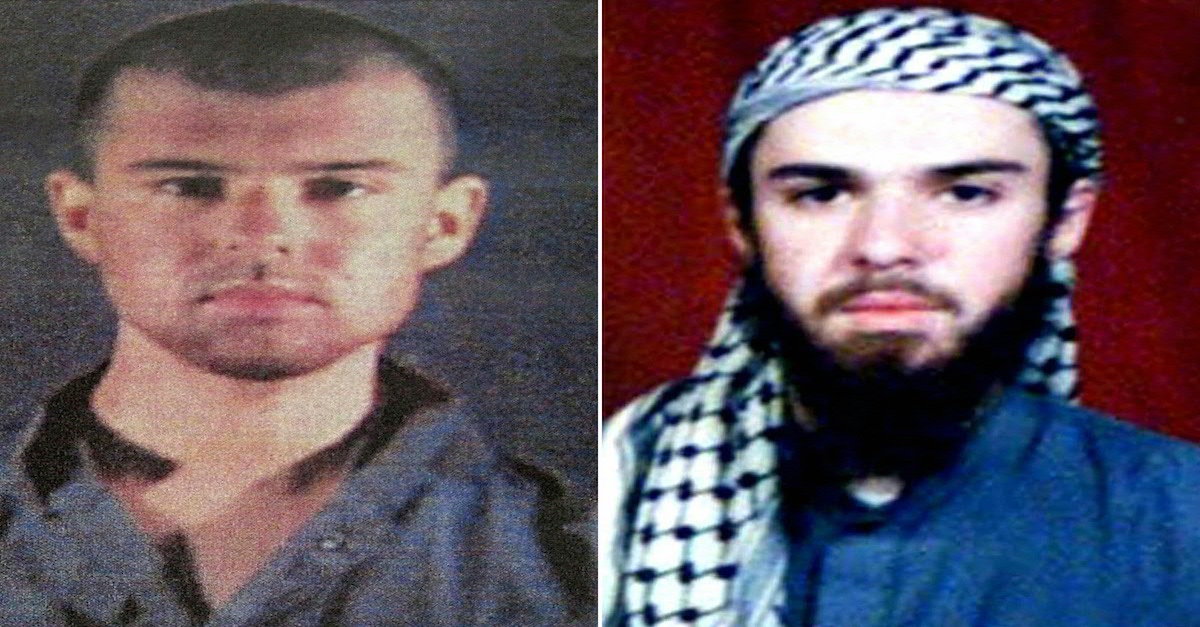 Police file photo made available February 6, 2002 of the “American Taliban” John Walker Lindh and at right a February 11, 2002 photograph of him as seen from the records of the Arabia Hassani Kalan Surani Bannu madrassa (religious school) in Pakistan’s northwestern city of Bannu.

When John Walker Lindh, 38, was captured on the battle field of Afghanistan in November 2001, the public was outraged and confused as to why an American would support the terrorists who attacked America on September 11, 2001. Lindh became better known as the “American Taliban.” And now, after serving 17 years of his 20-year sentence, Lindh is set to be released this week. But the father of a slain CIA officer is calling for an investigation into why Lindh is set to be released early.

Johnny Spann‘s son, Mike Spann, was killed during an inmate uprising at the Afghanistan prison where Lindh was first held.

“Nothing will be gained by not enforcing the Laws of the United States and holding those that break it accountable for their actions,” Spann wrote in the court filing. In an interview with CNN, Spann said that he would accept that Lindh served his time — if it hadn’t been alleged that he “continued to advocate for global jihad.”

“But with all these reports that are out, all these things that have been said and reported, what I am asking to happen is that they do an intense investigation, a thorough investigation of those reports to see if he actually has done that,” Spann said.

Spann cites a Foreign Policy article from June 2017 which outlines documents from the National Counterterrorism Center that says Lindh “continued to advocate for global jihad and to write and translate violent extremist texts” and that he “told a television news producer that he would continue to spread violent extremist Islam upon his release.”

There is no parole in the federal prison system, but prisoners can earn early release through good conduct. An inmate can reduce their sentence by up to 15 percent, which would be three years in Lindh’s case.

Sen. Richard Selby (R-Ala.) brought this issue to President Donald Trump‘s attention. Shelby said that Lindh “is a threat to our national security and should serve the entirety of his 20-year sentence.”

Lindh, an American who is believed to have had direct involvement in the death of CIA officer Mike Spann and plead guilty to supporting the Taliban in Afghanistan, is a threat to our national security and should serve the entirety of his 20 yr sentence.

Selby and Sen. Maggie Hassan (D-New Hampshire) sent a letter to the acting director of the Federal Bureau of Prisons to ask for more information on why Lindh and other convicted terrorists are being released early:

As many as 108 other terrorist offenders are scheduled to complete their sentences and be released from U.S. federal prisons over the new few years. Little information has been made available to the public about who, when, and where these offenders will be released, whether they pose an ongoing public threat, and what federal agencies are doing to mitigate this threat while the offenders are in federal custody.

In 2002, Lindh accepted a plea deal from the government. He pleaded guilty to supplying services to the Taliban and carrying explosives in commission of a felony. He was sentenced to 20 years in prison and is still set to be released on May 23.