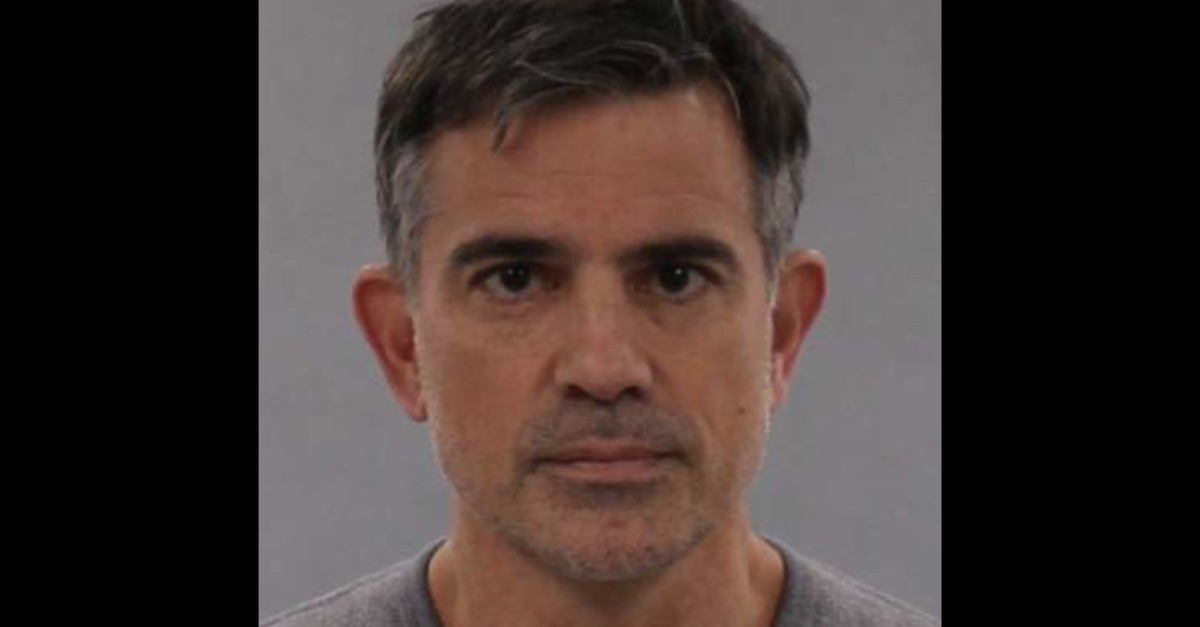 Connecticut man Fotis Dulos, 52, was arrested on Tuesday after a judge signed off on a warrant for his arrest. It was the third time that Dulos has been arrested in connection with the disappearance of his estranged wife Jennifer Farber Dulos, a 50-year-old mother of five last seen dropping off her kids at school on May 24, 2019. This time, he wasn’t arrested for tampering with evidence or hindering prosecution. This time, he was arrested for murder.

According to Connecticut State Police, Dulos is accused of capital murder, murder and kidnapping in the first degree. Dulos’s former girlfriend Michelle Troconis has been charged with conspiracy to commit murder. Read Law&Crime’s in-depth story on her arrest warrant here. Kent Mawhinney, a lawyer who represented his friend Dulos in a lawsuit filed by Dulos’s mother-in-law Gloria Farber, has also been charged with conspiracy to commit murder.

Here’s what police said they found over the course of their investigation.

DNA and fingerprints on evidence discarded in Hartford, Connecticut — implicating Fotis Dulos and Michelle Troconis, and identifying Jennifer Dulos as a victim of a violent crime. 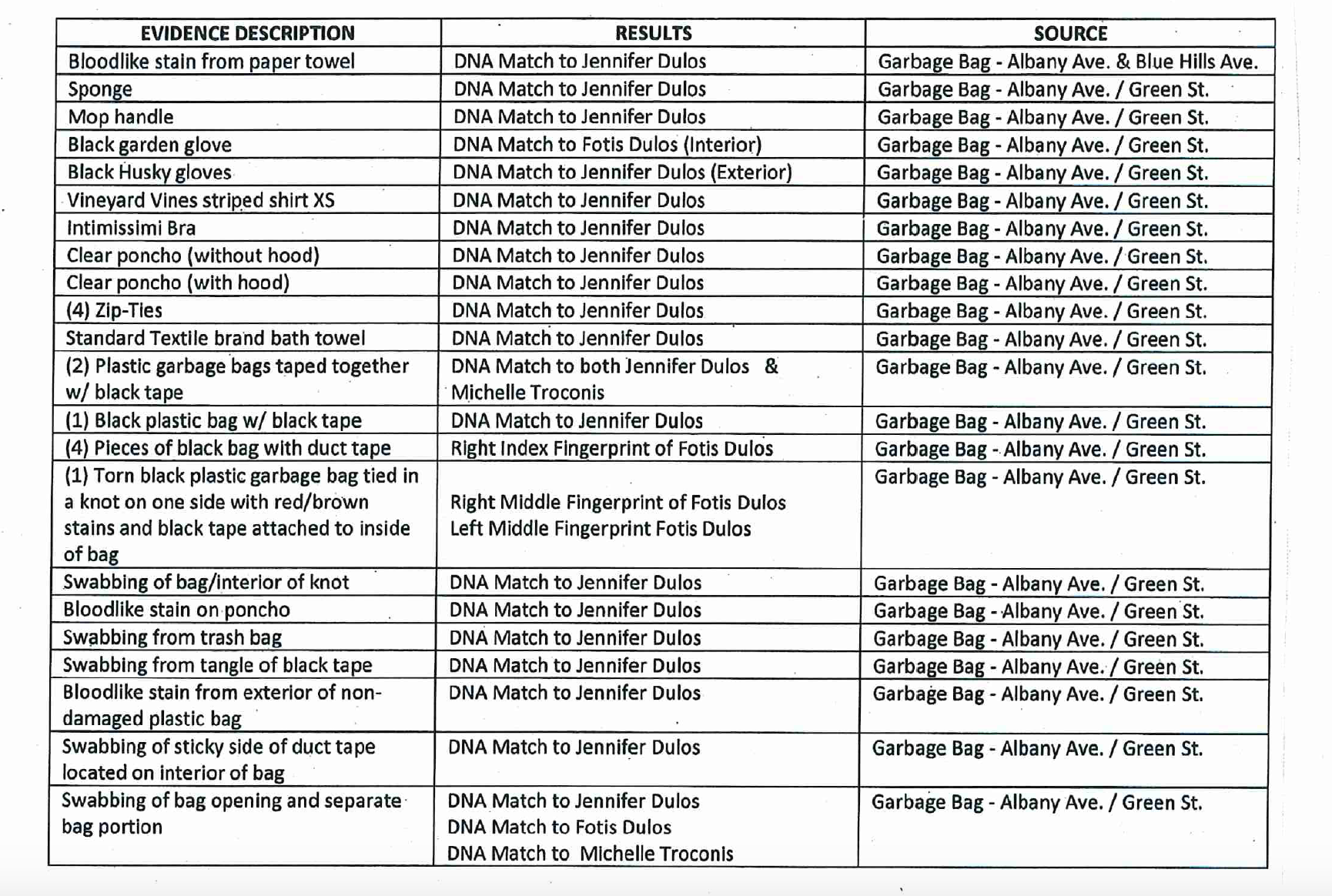 Evidence of DNA and blood stains found at Jennifer Dulos’s New Canaan home, implicating Fotis Dulos and indicating Jennifer was a victim of a violent crime at the scene.

Allegedly inconsistent and not entirely truthful answers from Troconis about key questions, including about Dulos’s whereabouts on the day Jennifer disappeared. In one instance, authorities said, Troconis claimed that she and Dulos showered together and “were intimate together” on the morning of May 24.

Eventually, according to police, Troconis admitted that she did not see Dulos until 1 p.m. on May 24. Troconis allegedly told police that Dulos once said of Jennifer, “Sometimes I hope she disappears.”

Police said Troconis “ultimately admitted she had not seen Dulos in the bedroom, in the shower, or anywhere else in the house” the morning Jennifer disappeared.

Police came to believe that, at around 5 p.m. at an “isolated” property owned by Dulos’s company Fore Group Inc.–a property that included an 11,000-square-foot mansion–a full-time employee of Dulos apparently “interrupted Dulos and Troconis from engaging in sex alongside the passenger side” of a Toyota Tacoma often used by the employee.

Troconis allegedly told investigators that Dulos said he “spilled coffee” in the Tacoma and needed to clean it up. Police said Troconis told them that paper towels were used to clean a brown substance that did not smell like coffee. 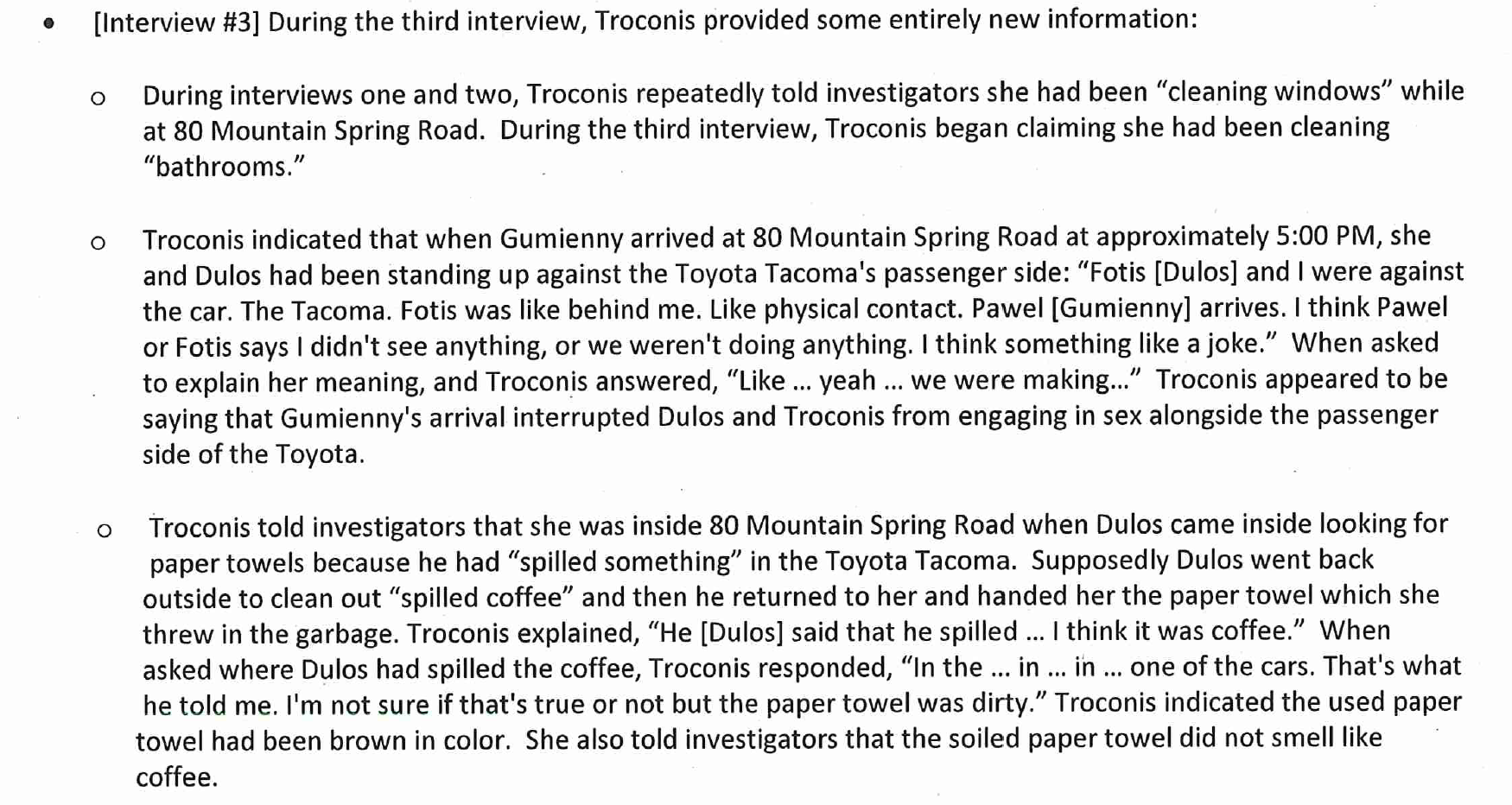 Mawhinney, the lawyer-friend of Fotis Dulos, was allegedly in contact with Dulos the evening before Jennifer went missing and the night of May 24. Authorities said that Mawhinney claimed he fell down stairs on May 25 and got a concussion, necessitating the replacement of his cellphone and seemingly clouding his memory of relevant events. 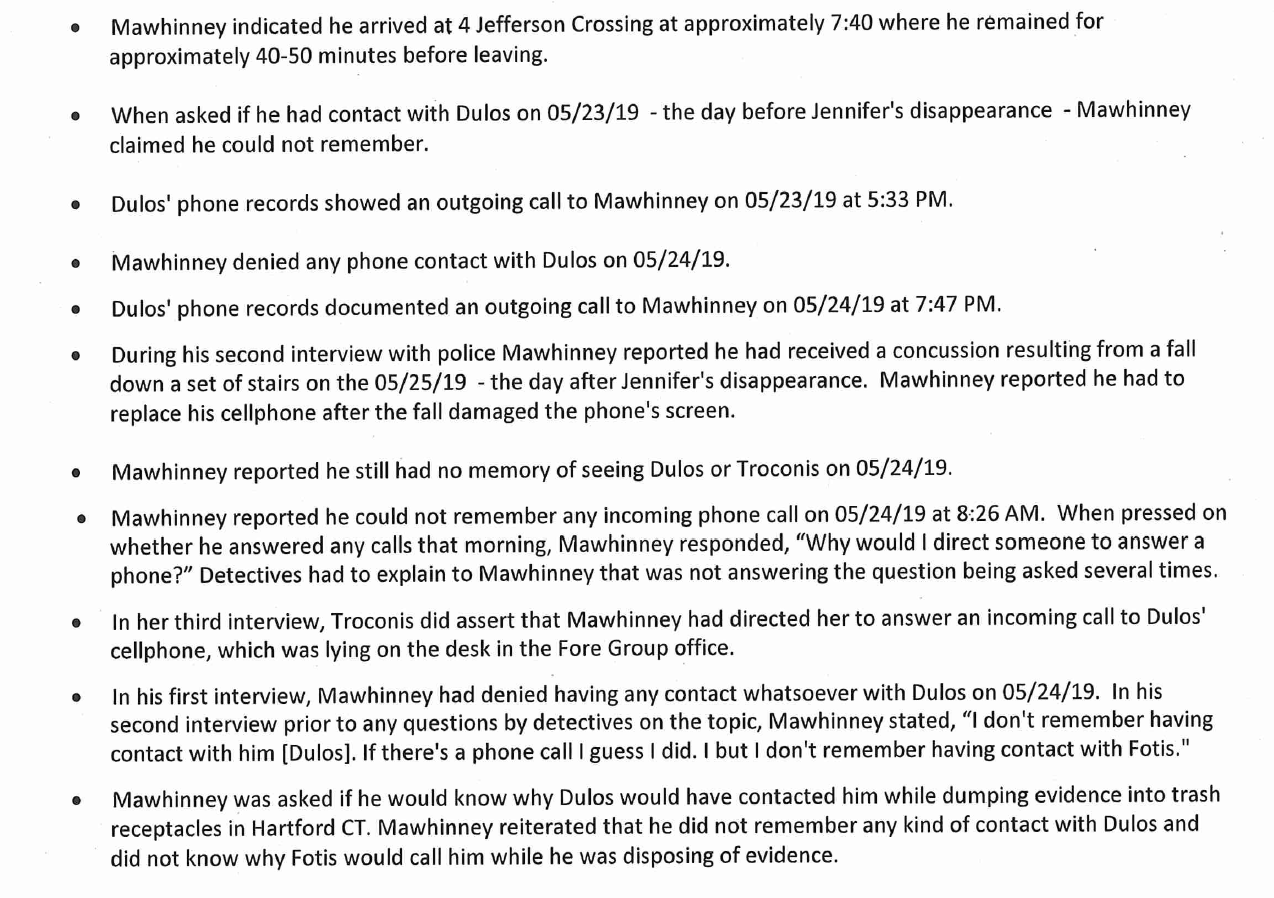 The Dulos employee, who has not been charged and who actually preserved evidence from the Toyota Tacoma that he thought was suspicious, claimed that Dulos warned him not to talk to police due to the fact the he has a “Green Card.”

Police said they seized the employee’s phone and that analysis of the phone indicated items (web history, searches and call logs) were deleted from it. Authorities said Dulos accessed the unlocked phone on May 28 to “check” the employee’s call history.

Authorities say the employee went so far as to go to a junkyard in search for replacement seats but was not successful, apparently angering Dulos.

When the employee asked Dulos why he wanted the seats replaced, Dulos allegedly answered that he gave Jennifer a hug on Mother’s Day, on which day he also held Jennifer’s cat. The employee said Dulos worried Jennifer’s hair could be found in the truck. Reminder, in case you need one, Jennifer is missing at this time.

The employee ultimately replaced the seats with seats from Dulos’s “wrecked Porsche” and kept the Tacoma seats in his own garage “in case the police ever wanted to take them.” 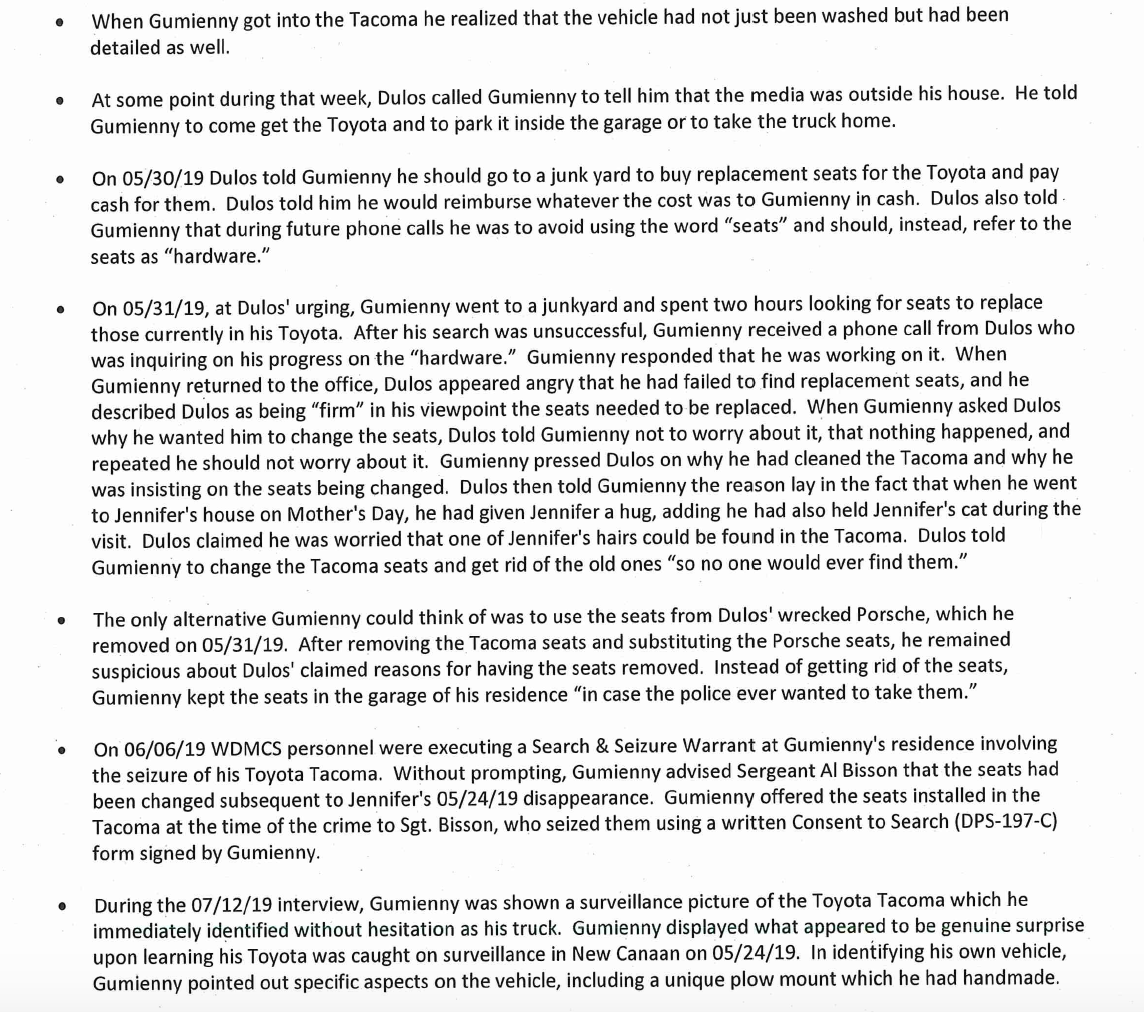 The long-term nanny Jennifer Dulos hired immediately noticed something was amiss in the kitchen on the day Jennifer went missing. After Jennifer didn’t respond to messages and calls, and didn’t show for her children’s orthodontist appointment, the nanny assumed something had happened and that Fotis Dulos was responsible. 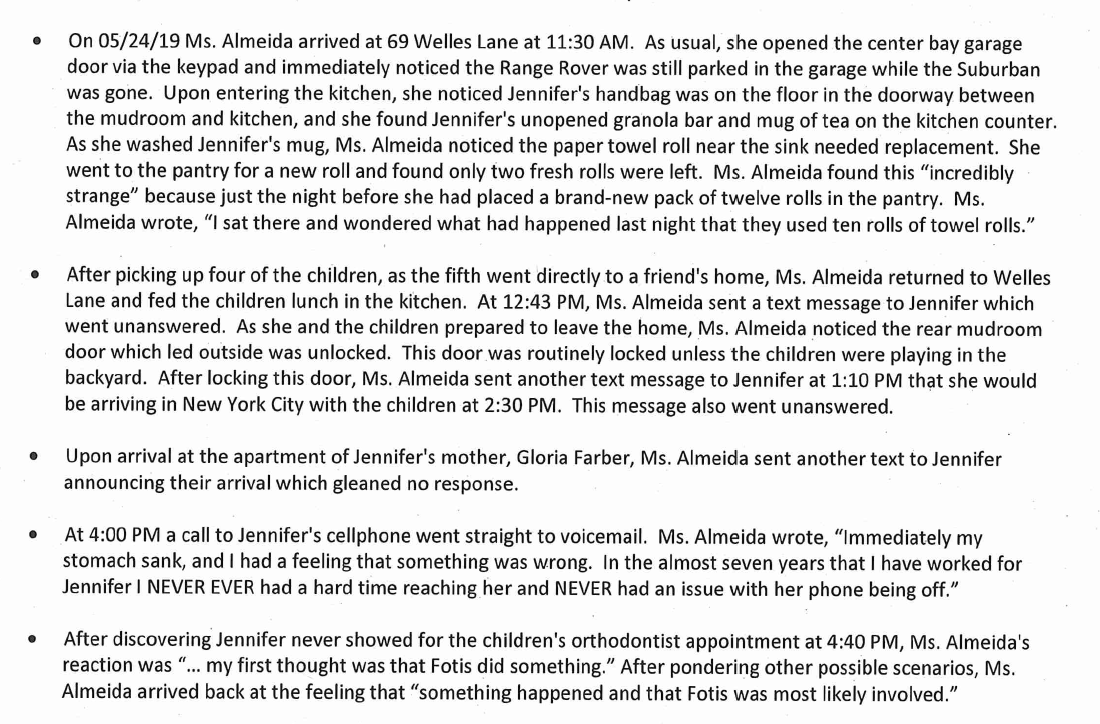 Fotis Dulos’s “debt exposure,” whether due to the lawsuit filed against him by Jennifer’s mother or due to his own line of credit balances, totaled $7 million as of May 31. 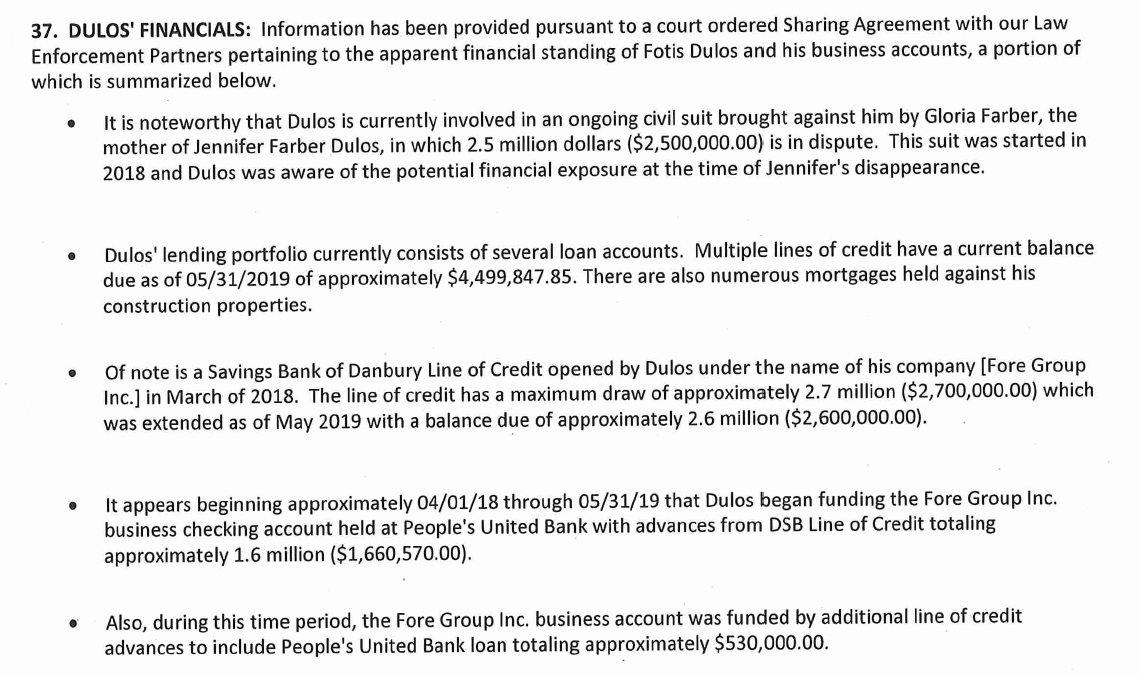 Police have not found Jennifer Dulos’s body, but they have no doubt that she was the victim of a violent crime. They detailed reasons they believe Jennifer is not alive, detailed why they believed zip ties were used, and shared the opinion of the chief medical examiner. The medical examiner concluded that Jennifer Dulos suffered “non-survivable” injuries in a “homicide of violence.” 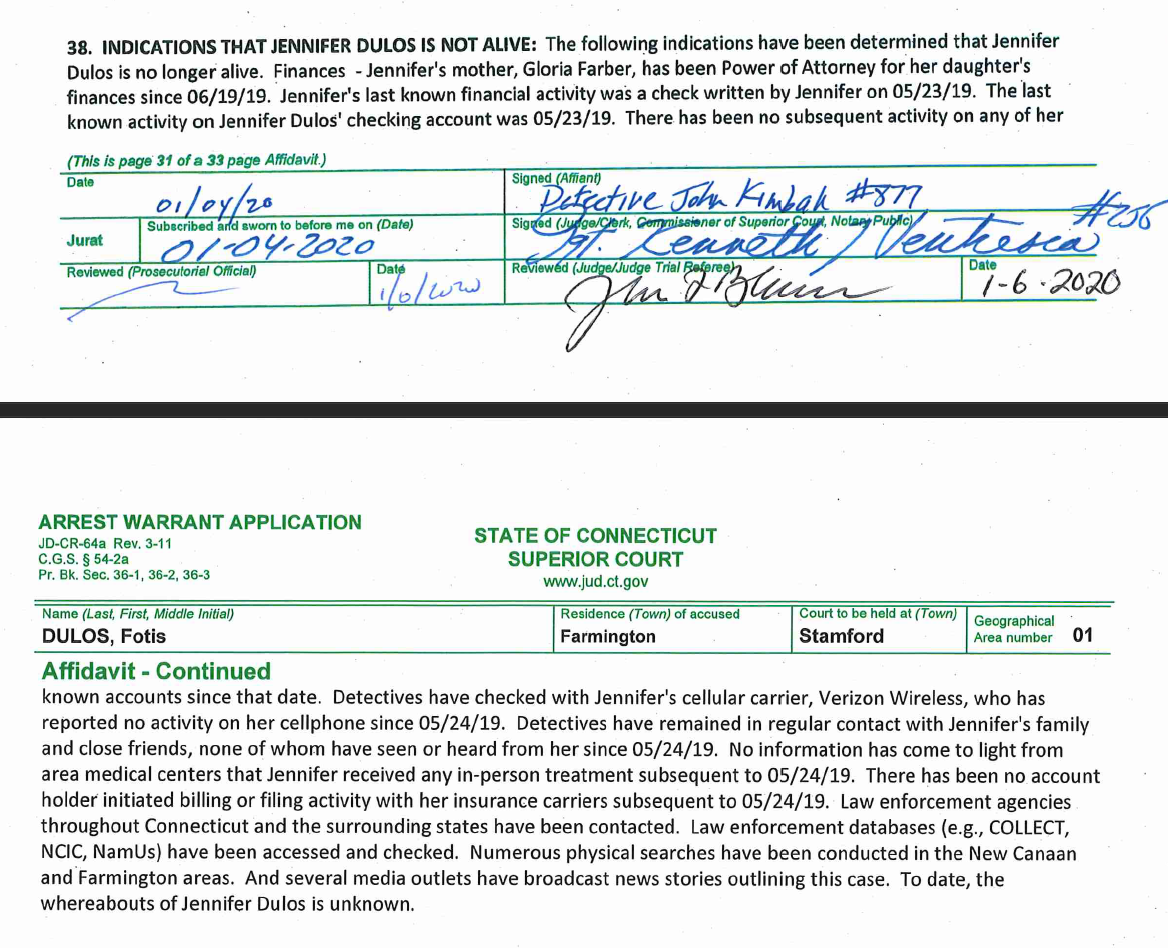 Dulos’s bond has been set at $6 million, while Troconis and Mawhinney each have $2 million bonds.

Earlier on Tuesday, Dulos’s attorney Norm Pattis said he and his client are “confident” they will beat the murder charge.

“I’m not surprised that the state decided to bring the charge,” said Pattis. “I haven’t seen the warrant. I’ll be surprised if they can win it. Mr. Dulos contends he was not involved,” he said, per CBS News. “In a paradoxical way, we welcome this fight, because we think we will win it. In fact, we’re confident we will. And now we won’t have to speculate about what it looks like any longer.”