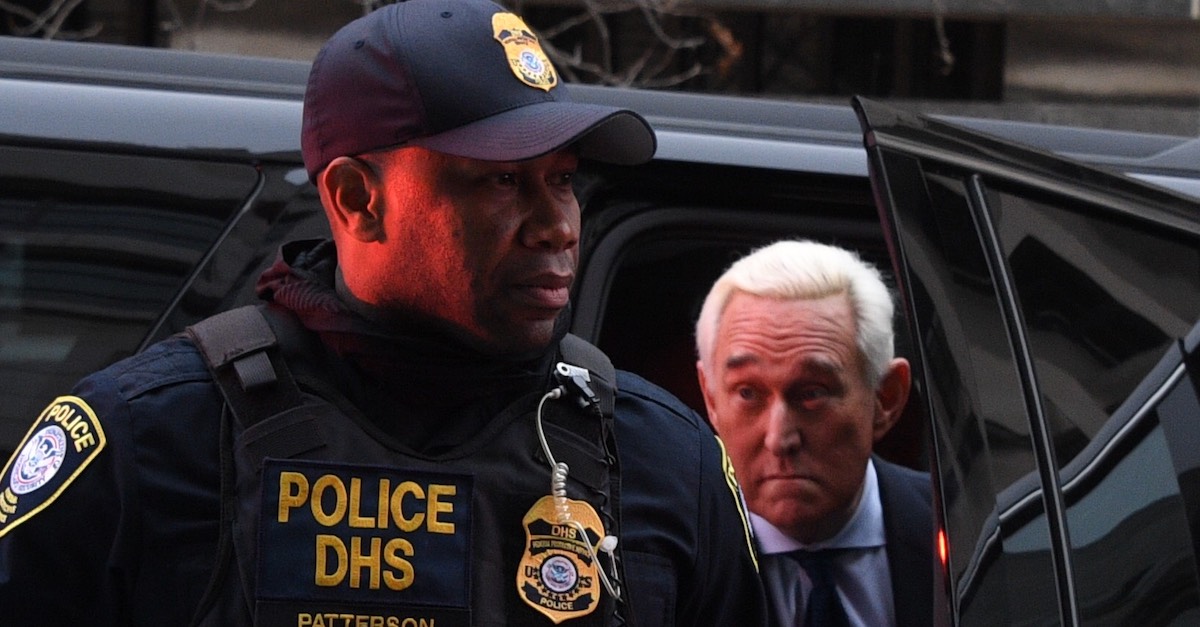 What a day it was in the hallowed and placid halls of the 156-year-old U.S. District Court for the District of Columbia, where U.S. District Judge Amy Berman Jackson attempted to elicit key information from several jurors in a high-profile case after the defendant was already convicted and sentenced.

Judge Jackson’s grilling of jurors on the Roger Stone case comes amid claims from the recently-convicted felon that the foreperson harbored untoward bias. Stone is, of course, requesting a new trial based on those allegations and previously moved to have Jackson herself taken off the case. She denied the latter request on Sunday.

According to Talking Points Memo’s Tierney Sneed, Jackson asked a series of questions without swearing the jury in late Tuesday afternoon.

After probably doing something to amend that little mishap, the Barack Obama-appointed judge grilled a juror as to how Tomeka Hart, the controversial foreperson in the case, was chosen. This was likely an attempt to allay concerns that the allegedly biased jury leader somehow marshaled her support in an untoward fashion. The jurors were kept anonymous to prevent threats and targeted harassment (the president tweeted about the judge and the foreperson while the hearing was happening). We know who Hart is because she defended the prosecutors who resigned from the Stone case. From there, her politics became clearer.

The foreperson did not seize power in a coup, however, because the decision was made by way of that democratic staple: the secret ballot. And, on top of that, according to Juror A, the female foreperson “absolutely” counseled respect during the deliberation stage.

“I never had any feeling” that the foreperson was attempting to guide the jury toward any particular outcome, Juror A said, adding that people “got along well” as they decided Stone’s fate.

After that, another juror took the stand for the somewhat atypical post-trial ritual conducted in the nation’s capital.

And Juror B had a bit more news to share:

Indeed, just hours ago a juror, identified himself in an article in the Washington Post. He described how the foreperson conducted herself and how the jury came to its conclusion that Stone was guilty as charged on all seven counts of witness tampering, obstruction and lying to federal investigators amid the Russia probe.

That juror, Seth Cousins, called BS on the idea that Hart rigged the jury against Stone. He said that the foreperson “oversaw a rigorous process” and actually slowed down the process several times to advocate for Stone’s rights:

There is no factual basis to say that the Stone jury was tainted or otherwise biased against the defendant. We conducted ourselves exactly as juries are supposed to. We looked at each element of every charge in isolation. We examined the evidence. We attempted to construct alternative explanations. We discussed each charge and conducted secret ballots and voice polls. We went around the room to ensure that quieter jurors were heard. As individuals, we did not vote guilty until we were convinced beyond a reasonable doubt. As a group, we did not return a verdict until we had reached a unanimous decision.

Our foreperson oversaw a rigorous process, slowing us down on several occasions and advocating for the rights of the defendant.

After a little more interrogation as to how well everyone got along–they “got along fine”–Juror B was dismissed and Judge Jackson moved on to Stone’s direct claim about juror misconduct. Bear with us here because it’s almost nearly the definition of picayune.

The contents of that tweet: two fist bumps; two hearts.

Here’s how Sneed and Politico’s Josh Gerstein saw it:

ABJ: your profile says “I heart”…I presume that means love?

Judge asks about some fist bump tweet around Nov 15 2019: ‘Were you celebrating the verdict that had yet to be decided in the Roger Stone case?’ Foreperson: ‘Absolutely not.’

Ginsberg asking the jury foreperson to explain the fist bump emojis she used in a 3:14 AM post from Nov. 15, early of the morning before the guilty verdict. Asked by the Stone lawyer if it was a sign of ‘solidarity,’ she confirms that it was.

After more or less answering the question of the mysterious emoji–government attorneys complained about essentially redoing voir dire (jury selection process) post-trial; Jackson said she wanted to dispense with the issue in order to protect against claims on appeal–the foreperson was then grilled about a post referencing Public Enemy frontman Chuck D.

Fight the power? Welcome to the Terrordome? Maybe so.

Finally, questioning turned toward whether the foreperson had been honest on a written questionnaire about posting an article related to the probe by former special counsel Robert Mueller or the House Permanent Select Committee on Intelligence–apparently no one could really recall exactly which; maybe it was both.

A question from Stone attorney Seth Ginsberg about that specific post was quickly flagged by the government for allegedly mischaracterizing what the foreperson actually said on that questionnaire in question. Courtroom wrangling ensued before the foreperson finally admitted that she doesn’t really remember everything she ever posted–but that she was being honest at the time.

She replies, “That was the honest answer on Sept 12. It is why I didn’t check yes or no because I didn’t want to appear deceptive. I was giving the best answer I could.” She said she read that specific question to mean she should reply “in terms of Roger Stone.”

“I’ll take the matter under advisement,” Judge Jackson said at the end of the hearing. “Thank you everyone for staying.”