DOJ Fires Back at Judge Emmet Sullivan in D.C. Circuit: We’re the Prosecutors Here, Not You

After U.S. District Judge Emmet Sullivan on Monday explained to the U.S. Court of Appeals for the District of Columbia Circuit why he decided not to immediately dismiss the Michael Flynn prosecution, the Department of Justice responded with a lengthy brief of its own.

Although the D.C. Circuit ordered Sullivan to respond by today, the DOJ was also “invited” to file a response. The response was 45 pages. The table of contents showed that the DOJ would focus heavily on the idea that Sullivan had turned himself into a prosecutor (see: “The Constitution commits the power to prosecute to the Executive rather than the Judiciary”; “Rule 48, read against the backdrop of the Constitution, required the district court to grant the government’s motion to dismiss because the motion was unopposed”; “the District Court Erred When, Instead Of Granting The Motion To Dismiss, It Entered An Order Appointing An Amicus Curiae And Contemplating Its Own Prosecution.”

The contempt issue in the Flynn case was a primary reason why Sullivan said he had the authority to appoint John Gleeson as amicus curiae.

Sullivan’s counsel Beth Wilkinson argued on Monday that the “appointment of an amicus to brief the contempt power” and to present arguments on whether Flynn should be held in contempt for perjury is “appropriate”—especially in a case where the defendant twice admitted in open court that he was guilty of lying to the FBI.

“Because contempt implicates core Article III powers, ‘Courts cannot be at the mercy of another Branch in deciding whether [contempt] proceedings should be initiated,'” the Sullivan filing said. “That is why the Federal Rules explicitly authorize the appointment of a special prosecutor to investigate contempt.” Wilkinson said it simply wasn’t true that Sullivan anointed himself as a prosecutor.

“Judge Sullivan’s amicus order is more restrained: It does not appoint Judge Gleeson to prosecute any contempt charge, but merely to address whether initiating a contempt proceeding here would be appropriate, and gives Mr. Flynn the last word on the question,” the filing continued.

DOJ all but said that was nonsense. There is no Article III controversy here, argued DOJ:

The Constitution vests in the Executive Branch the power to decide when—and when not—to prosecute potential crimes. Exercising that Article II power here, the Executive filed a motion to dismiss the indictment, and petitioner consented. Despite that exercise of prosecutorial discretion, and the lack of any remaining Article III controversy between the parties, the district court failed to grant the motion and bring the case to a close. It instead appointed an amicus curiae to argue against dismissal and to consider additional criminal charges.

This Court should issue a writ of mandamus compelling dismissal. Federal Rule of Criminal Procedure 48(a) provides that “[t]he government may, with leave of court, dismiss an indictment.” That language does not authorize a court to stand in the way of a dismissal the defendant does not oppose, and any other reading of the Rule would violate both Article II and Article III. Nor, under the circumstances of this case, may the district court assume the role of prosecutor and initiate criminal charges of its own. Instead of inviting further proceedings, the court should have granted the government’s motion to dismiss. And given the court’s infringement on the Executive’s performance of its constitutional duties, a writ of mandamus is appropriate, as this Court held in similar circumstances in United States v. Fokker Services B.V., 818 F.3d 733 (D.C. Cir. 2016.)

Then came the following header and argument that Sullivan “erred” by not dismissing the Flynn case: “Even if [Flynn] committed criminal contempt, the authority to prosecute him would lie with the U.S. Attorney, not the district court.” 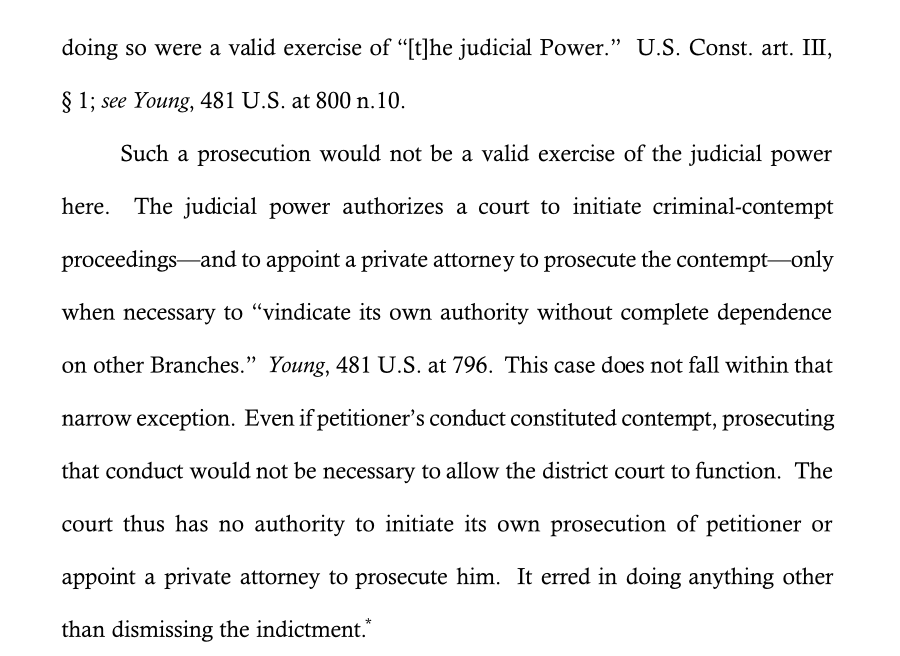 The DOJ argued that an admittedly “drastic and extraordinary” writ of mandamus directing Sullivan to dismiss the case is entirely appropriate and warranted here.

“The district court plans plans to subject the Executive’s enforcement decision to extensive judicial inquiry, scrutiny, oversight, and involvement. Under the Supreme Court’s and this Court’s precedents, it is clear and indisputable that the district court has no authority to embark on that course,” DOJ concluded.

US v Michael Flynn – DOJ Mo… by Law&Crime on Scribd