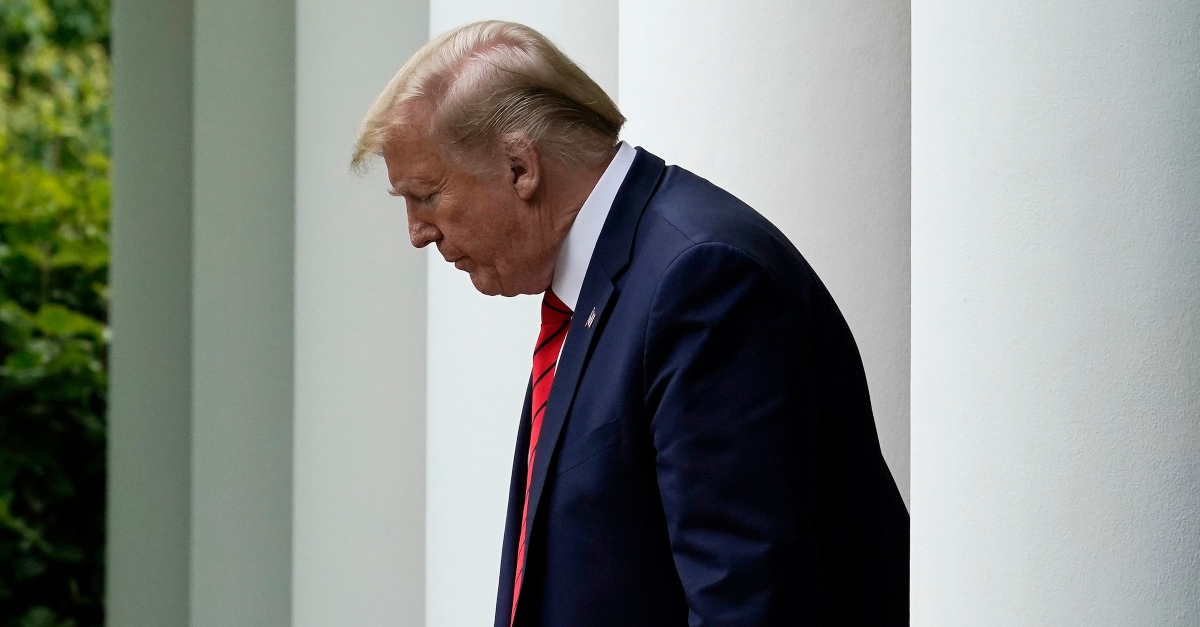 President Donald Trump’s latest removal of an inspector general continues to raise eyebrows in Washington, D.C. and beyond. And now, the 45th president has been outright accused of breaking the law over his treatment of the soon-to-be former federal employee.

U.S. Department of State Inspector General Steve Linick was unceremoniously slated for dismissal last Friday night by way of a letter sent to congressional leadership announcing the personnel decision. The public became aware of the move after House Speaker Rep. Nancy Pelosi (D-Calif.) released that notice to the media.

A wave of outrage quickly ensued as Democrats and other critics of the administration wondered out loud whether Linick was axed because he was investigating alleged impropriety committed by Secretary of State Mike Pompeo–who Trump said requested Linick’s replacement in the first place. Later events suggested the inspector general was more likely bounced after investigating the administration’s controversial arms deal to terror-exporting U.S. ally and authoritarian dictatorship the Kingdom of Saudi Arabia.

Still, inspectors general, in the Beltway parlance of appointments, serve at the pleasure of the president and they can be removed all-but entirely at-will so long as statutory procedures are followed.

The general law on point governing such removals notes as follows:

An Inspector General may be removed from office by the President. If an Inspector General is removed from office or is transferred to another position or location within an establishment, the President shall communicate in writing the reasons for any such removal or transfer to both Houses of Congress, not later than 30 days before the removal or transfer. Nothing in this subsection shall prohibit a personnel action otherwise authorized by law, other than transfer or removal.

There are other, more-detailed and specific procedures for certain inspectors general. For example: removing the inspector general overseeing the intelligence community is more tightly governed because the national security state has one of the most effective lobbies in Congress–but the basic contours are more or less the same across all agencies supplied with the positions.

If the president notifies the relevant members of Congress at least 30 days prior to a planned firing and communicates the reason why the inspector general should be fired, there’s simply nothing unlawful afoot and there’s not much critics can do but complain. Inspectors general are political and have been since their creation in 1976.

For example, former President Ronald Reagan immediately fired every single inspector general on the day he was inaugurated in 1981. While Trump’s actions have been far less exhaustive than Reagan’s, removals of inspectors general have been somewhat rare in recent years.

Former president Barack Obama kicked off the modern trend in 2009 when he fired then-inspector general of the Corporation for National Community Service with the vague justification that he no longer had “the fullest confidence” in Gerald Walpin.

Trump has since repeatedly used the same vague Obama-crafted justification to jettison several inspectors general over the course of his administration, beginning with then-inspector general of the Intelligence Community, Michael Atkinson, in April 2020.

And all of this has been legal under the basic terms of the relevant statute. But new reporting from the Washington Post could complicate the legal issues surrounding Linick’s eventual ouster. Per that report by John Hudson and Carol Morello:

The terms of Linick’s exit remain contentious. In a letter sent to Congress on Friday, Trump said Linick’s removal would be effective in “30 days,” giving him time to wind down his investigations. But Linick has since been told that he is physically barred from returning to the State Department even to collect his belongings, complicating his ability to finish his work, said a U.S. official who like others spoke on the condition of anonymity to discuss internal policies.

“This is a direct violation of the Inspector General Act,” he tweeted, “In 2008, [former Democratic Party senator Claire McCaskill] sponsored a bipartisan bill, which became law, to require POTUS to give 30 days notice before removing an IG so that Congress could have time to stop a retaliatory firing. This lockout violates that law!”

If the Post‘s anonymous source is telling the truth–and all anonymously-sourced bits of District-based gossip should be taken with mid-sized salt pills–the inspector general and his defenders might very well have a point. Barring a federal employee–here, Linick–from accessing their office and work materials could present grounds for something akin to arguing constructive termination.

But there’s not a specific remedy available to Linick for any alleged violation of the 30-day congressional notice requirement. Oversight over the federal oversight watchdogs is relegated to Congress alone.

And such an investigation is already in the queue.

[image via via Drew Angerer_Getty Images]