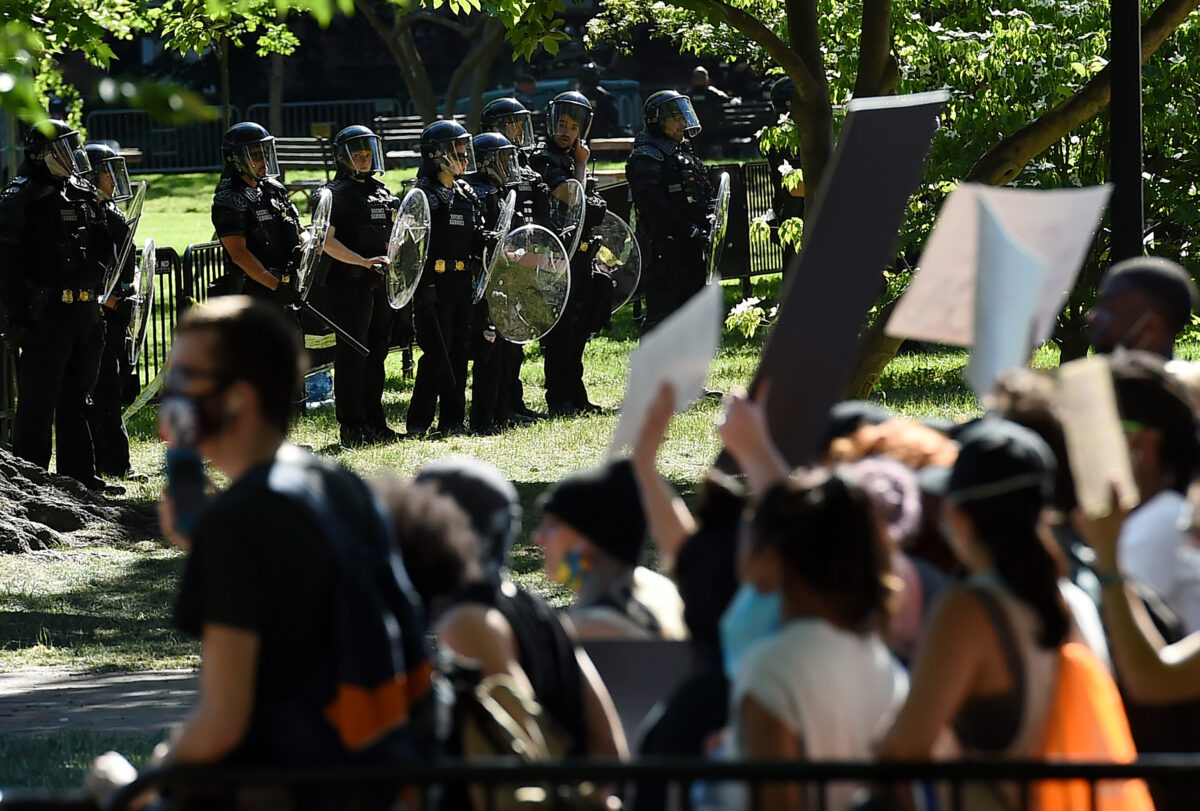 The Department of Homeland Security (DHS) Inspector General prevented career officials within the agency from moving forward with investigations into the Secret Service (USSS) concerning what role the agency played in the Trump administration’s controversial use of force to remove protesters from Lafayette Square in June 2020, according to a Tuesday report from the Project on Government Oversight (POGO).

On June 1, 2020,  the Trump administration controversially deployed federal law enforcement officers — who used tear gas, pepper spray, and rubber bullets — to forcefully remove the crowd of demonstrators protesting against police brutality in the aftermath of George Floyd’s death. Once the crowd was dispersed, then-President Donald Trump made his way through the square to be photographed holding a bible in front of the St. John’s Episcopal Church, which had been damaged by a fire that was intentionally set the night before.

The documents obtained by POGO—which were backed by multiple sources within the federal government—revealed that Inspector General Joseph Cuffari, a Trump appointee, quashed the probe which would have taken place in the critical months preceding the presidential election. Cuffari, who currently remains in his role as the top watchdog at DHS, previously served as the policy advisor for Military and Veterans Affairs for Republican Governors Doug Ducey and Jan Brewer of Arizona.

“Indeed, Cuffari’s decision to avoid delving into such sensitive issues in the run-up to a presidential election inevitably raises questions about his role as an independent and non-partisan watchdog overseeing one of the largest and most consequential Cabinet departments. That concern is compounded because he did so by overruling the previously unreported recommendations of his own staff,” the report stated.

There has been a great deal of mystery surrounding the decision and manner in which protesters were cleared from Lafayette Square. White House press secretary Kaleigh McEnany initially told reporters that “it was Barr who made the decision” to remove protesters from the square, referring of course to then-Attorney General Bill Barr. However, in a subsequent interview with the Associated Press, Barr claimed law enforcement officers were already moving to push protesters from Lafayette Square upon his arrival, saying he did not give the command to disperse the crowd but supported the decision.

“As a result of Inspector General Joseph Cuffari’s decision not to probe the chaotic Lafayette Square episode, a variety of unanswered questions remain surrounding the Secret Service’s adherence to its own use-of-force and related policies,” the POGO report stated. “Because Cuffari blocked the proposed review, it’s unclear if a full picture will ever emerge of who was in charge or what happened inside the Secret Service’s Joint Operation Center, which normally plays a key coordination role when protestors are cleared from Lafayette Square and its environs.”

In an email to POGO, a spokesperson for the DHS IG said the office “does not have the resources to approve every oversight proposal,” adding that a determination was made that such resources “would have a higher impact elsewhere.”

The Government Accountability Office (GAO) is scheduled to release a report on its review of Cuffari’s office within the next day. That report will be at the center of a hearing with the House Homeland Security Committee on Wednesday.