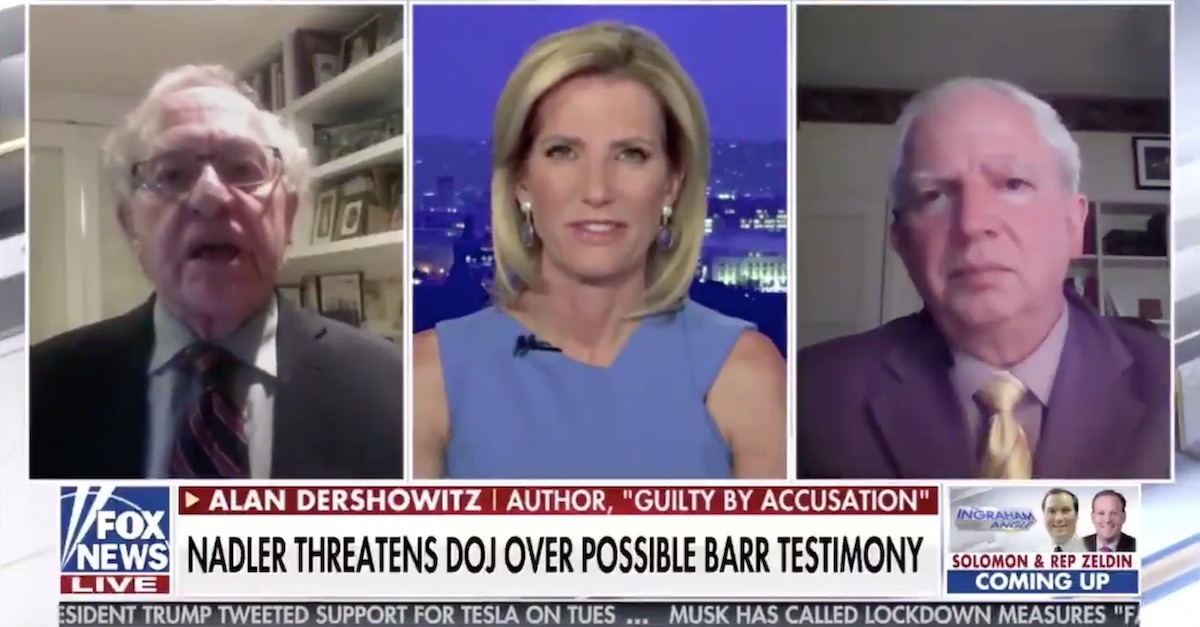 Dershowitz declared during a Fox News segment that Sullivan demonstrated that he is now the “most partisan” and “most political” individual involved in the effort to keep the case against Flynn from being permanently and forever dismissed.

“Everybody seems to be weaponizing national security and other issues for political advantage. Now enter Judge Sullivan who has become the most partisan, the most political in this effort to try and resurrect the prosecution,” Dershowitz said. “It’s just outrageous, and the American public are the big victims here because we don’t know who to trust.”

“That’s why it’s essential that John Durham do his investigation and tell us what the facts are. Let the facts be revealed and let the chips fall where they may,” he added.

Some saw the Dershowitz segment and said it was “seriously sad.”

I've appeared before #JudgeSullivan countless times in 25+ years when I have sued both DEM & GOP Administrations. Furthest thing from the truth & disgraceful that @AlanDersh had the gall to say this. What happened to you Alan? Seriously sad. https://t.co/qdNAK8OUiP

Dershowitz elaborated on his position in a Wednesday op-ed in the Wall Street Journal. He essentially argued that, given the DOJ’s motion to dismiss and the defense’s agreement with it, there is no longer a controversy. Therefore, in Dershowitz’s view, Sullivan should have simply dismissed the case:

The Constitution limits the jurisdiction of federal judges to actual cases and controversies. They may not offer advisory opinions or intrude on executive or legislative powers, except when the other branches have exercised them in an unconstitutional manner. Federal judges are umpires deciding matters about which litigants disagree. If the litigants come to an agreement, there is no controversy. The case is over.

Dershowitz said that Sullivan had no business inviting the opinions of Watergate prosecutors. He said this constituted an encroachment on the Constitution by Sullivan:

By inviting the irrelevant opinions of outsiders, Judge Sullivan is unconstitutionally encroaching on executive power. Only the executive has the authority to prosecute or not. Implicit in that exclusive power is the sole discretion to decide whether to drop a prosecution, even if, as in this case, the court has accepted the defendant’s guilty plea. Once prosecutors have agreed with the defendant that the case should be dropped, the court loses its constitutional authority to do anything but formally enter an order ending the case, because there is no longer any controversy for it to decide. There is case law, and a judge-written procedural rule, supporting Judge Sullivan’s order, but that doesn’t make it constitutional.

As Law&Crime reported before, the DOJ’s motion to dismiss was not a done deal, precisely because the DOJ asked Sullivan to dismiss the Flynn case under Federal Rule of Criminal Procedure 48(a). That rule allows a case to be dismissed “by the government,” but only “with leave of [the] court” — i.e., with the permission of the judge.

Dershowitz suggests that leave of the court here is a mere formality that doesn’t involve judicial discretion, but Sullivan clearly didn’t see it the same way. Sullivan is engaging in a more protracted and probing examination of the dismissal.

More than a decade ago, the Department of Justice under President Barack Obama moved to dismiss the case against former Senator Ted Stevens (R-Alaska) after Stevens was found guilty. Sullivan recognized that there was serious prosecutorial misconduct and tossed the verdict, but he also appointed a special counsel to investigate whether the prosecutors — you guessed it — should be held in criminal contempt.