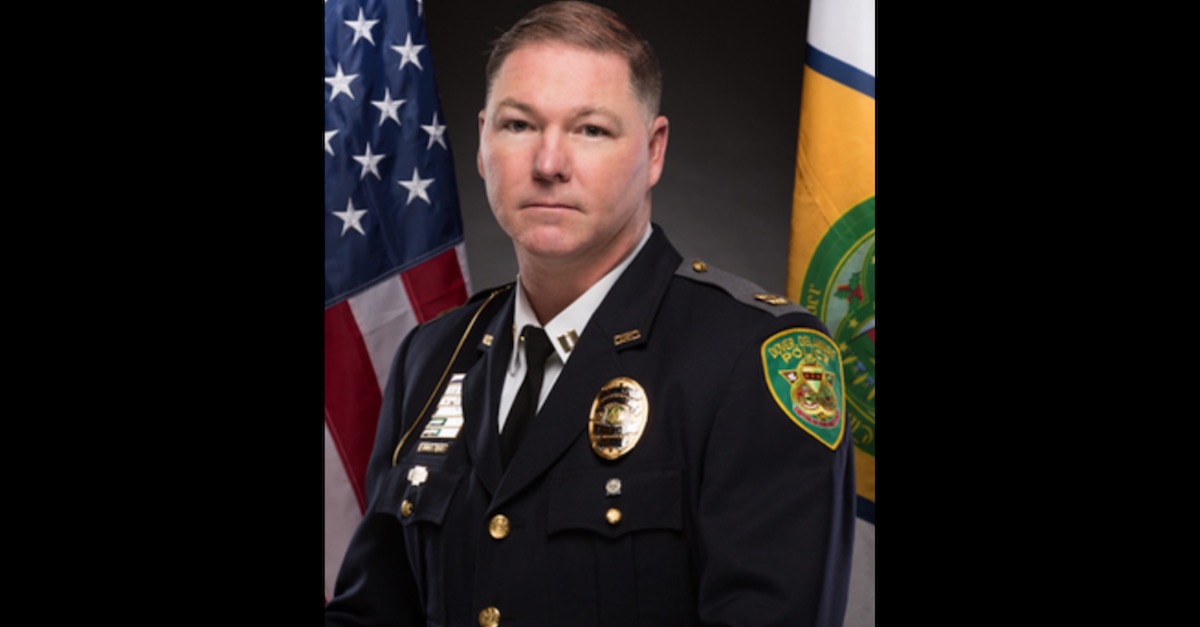 A police captain in Delaware has filed a federal lawsuit claiming that he did not get a promotion to police chief that he was qualified for because he was discriminated against based on race, in violation of Title VII of the Civil Rights Act of 1964. He is seeking a jury trial and damages.

In the lawsuit, Spicer noted that some of the named defendants — Sudler, Anderson, and Mailey — are African Americans, in a seeming effort to bolster the claim of a race-based conspiracy against him. Spicer claimed that after Mailey became Deputy Chief of Police back in 2014 — because Mailey is an African American, Spicer says — “five Caucasian Officers filed grievances for racial discrimination.” Per the lawsuit:

In any event, Mailey retired this year from the force and the city is looking to fill that position, WBOC reported.

After the U.S. Equal Employment Opportunity Commission (EEOC) in July determined that Spicer’s complaint “does not establish a violation of the statutes,” Spicer filed the federal lawsuit we now discuss on Oct. 16, 13 days after applying for the police chief position again. 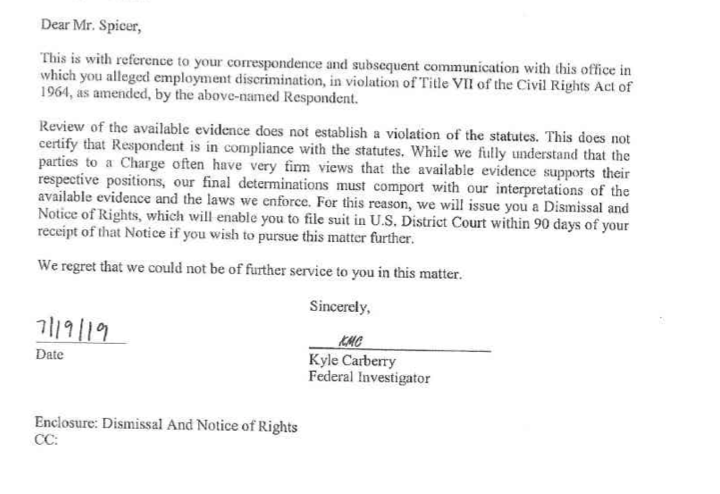 In the lawsuit, Spicer said that qualifications for the job posting in question were changed after outcry from civil rights activists and African American councilmen Anderson and Sudler. Spicer said the defendants wanted the requirements to be minimized — “the job description posted on January 18, 2017, required a Bachelor’s degree in business administration, criminal justice, public administration or a related field. It also stated a Master’s degree was preferred”; “Due to the political pressure from Mr. Anderson and Mr. Sudler, Representative Sean Lynn, and Council President Timothy Slavin recommended that the Chief of Police job description and requirements should be substantially minimized, including the removal of the requirement of a Bachelor’s degree.”

At the heart of Spicer’s argument is that he had the qualifications in the job description and then some, but Mailey, who is black, didn’t have a Bachelor’s degree and city officials ensured that Mailey became police chief anyway by changing the job requirements. 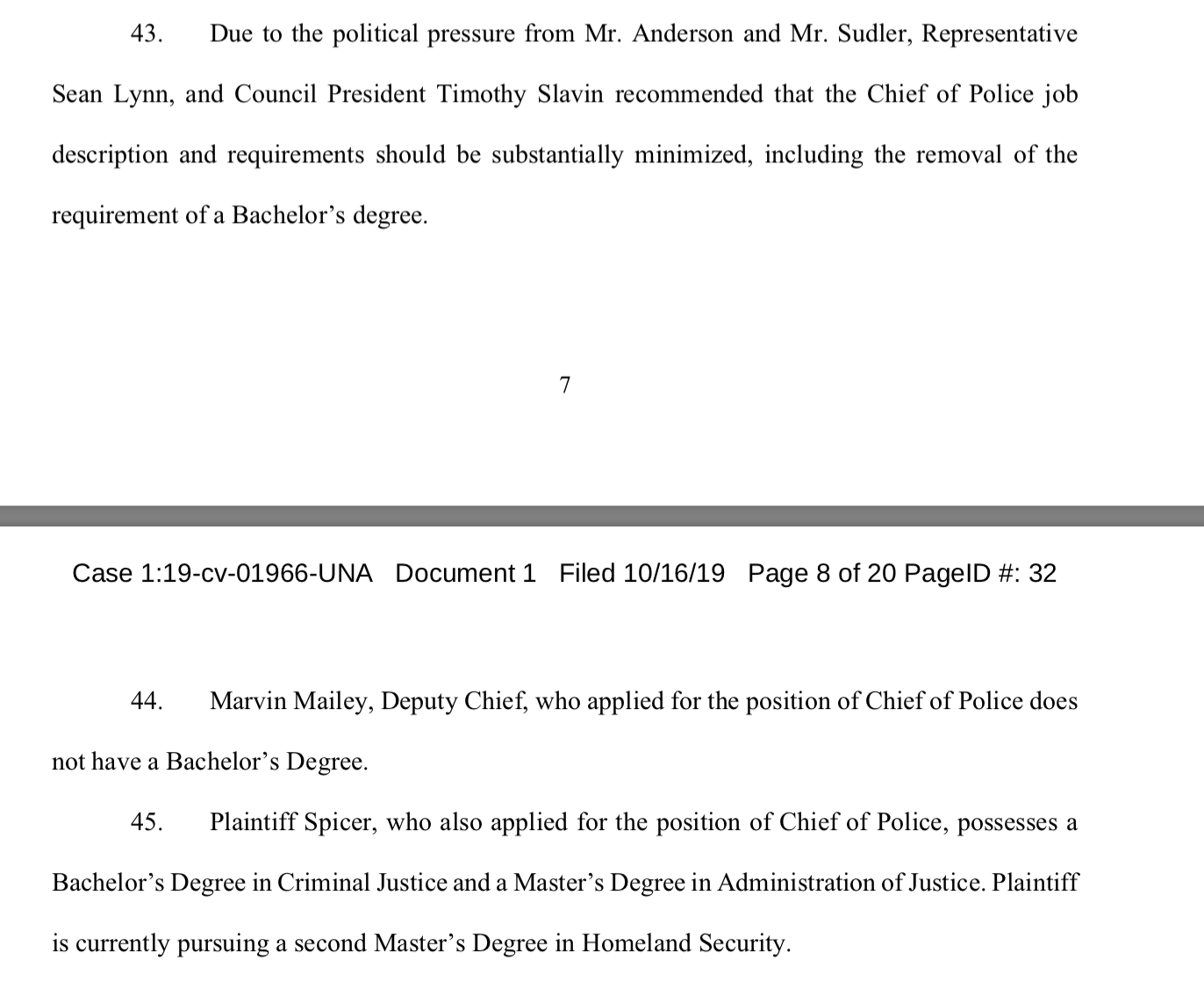 A few paragraphs later, Spicer made mention of a Police Chief Committee meetings on Feb. 1 and Feb. 14 in 2017, during which Councilman Slavin supported hiring of Mailey — Spicer says, because he was an African American candidate — and Anderson and Sudler expressed their opposition to the job requirements, knowing that Mailey not have a Bachelor’s degree or an Associate’s degree. 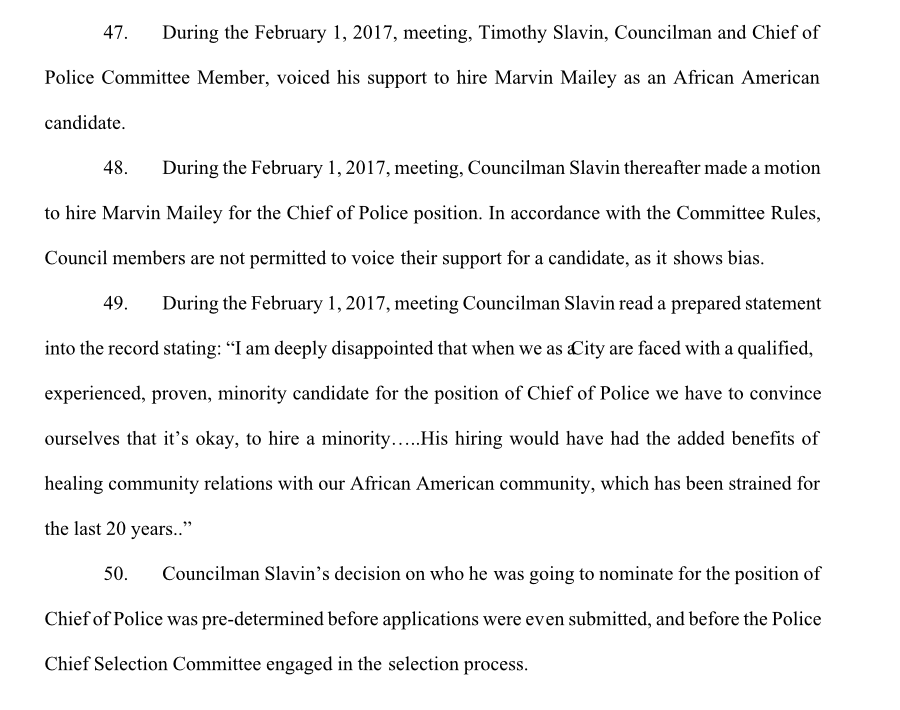 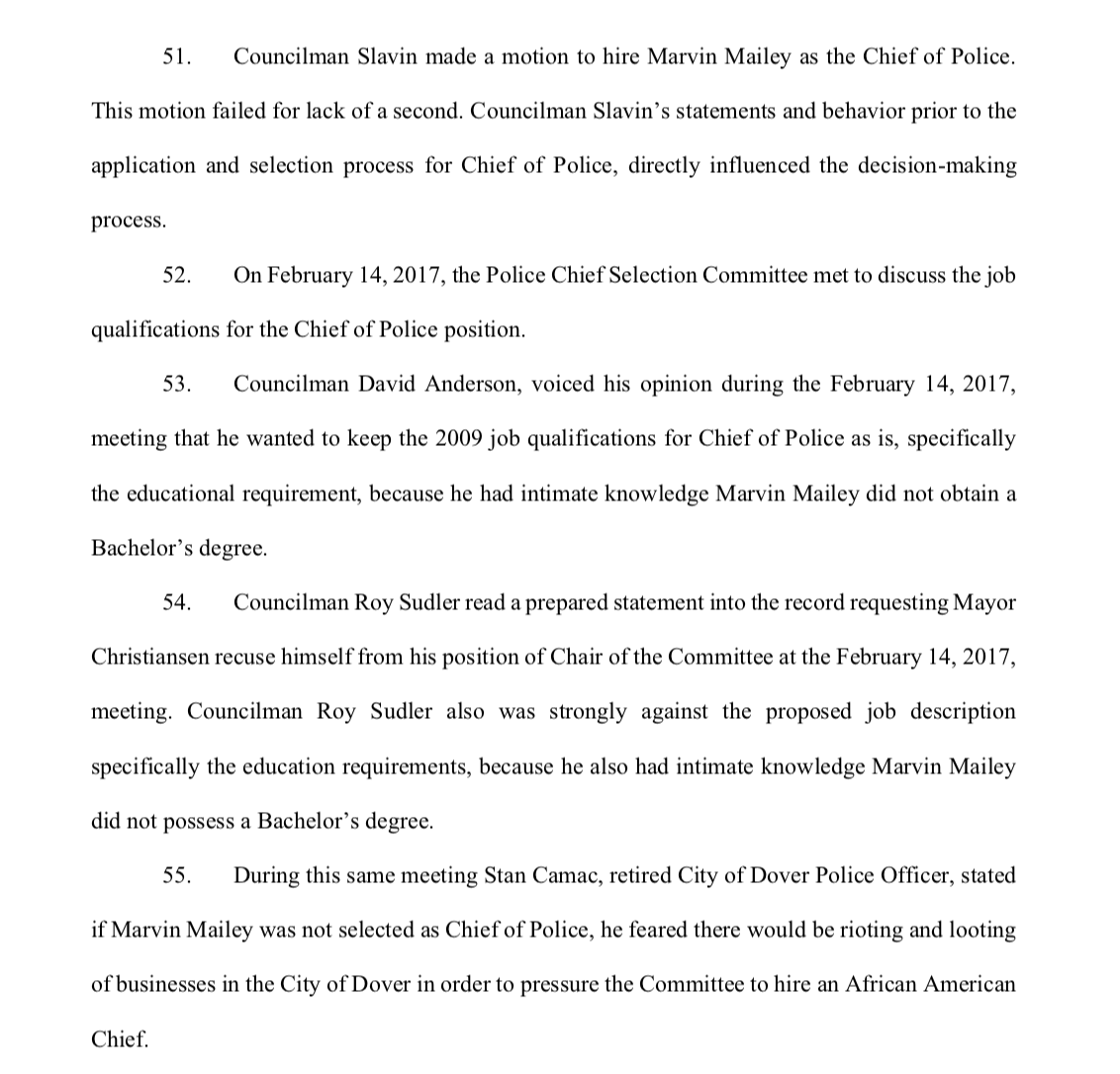 Mailey was nominated and confirmed on May 4, 2017. In the ensuing days, Spicer filed a grievance. The following month, that grievance was denied, and Spicer claimed he was thereafter retaliated against:

After filing a grievance, on July 24, 2017, Plaintiff was denied the promotion to Deputy Chief, despite being the most qualified candidate and transferred from his current position of Operations Division Commander to Administrative Division Commander. Plaintiff engaged in protected activity when he filed a charge of discrimination with the Delaware Department of Labor on September 19, 2018. On November 26, 2018, Marvin Mailey removed the Planning and Training Unit, including three sworn officers and four recruits from Plaintiff’s chain of command which again diminished Plaintiff’s job responsibilities and promotional opportunities as retaliation for filing a charge of discrimination.

Now that Mailey has retired, Spicer said that he has applied for the Chief of Police position, which once again includes “greater qualifications” in the job description:

You can read the complaint in full below.