Chicago Woman Recently Released from Bali Prison After Killing Mother, Stuffing Body in Suitcase Was Arrested Upon Her Return to U.S. 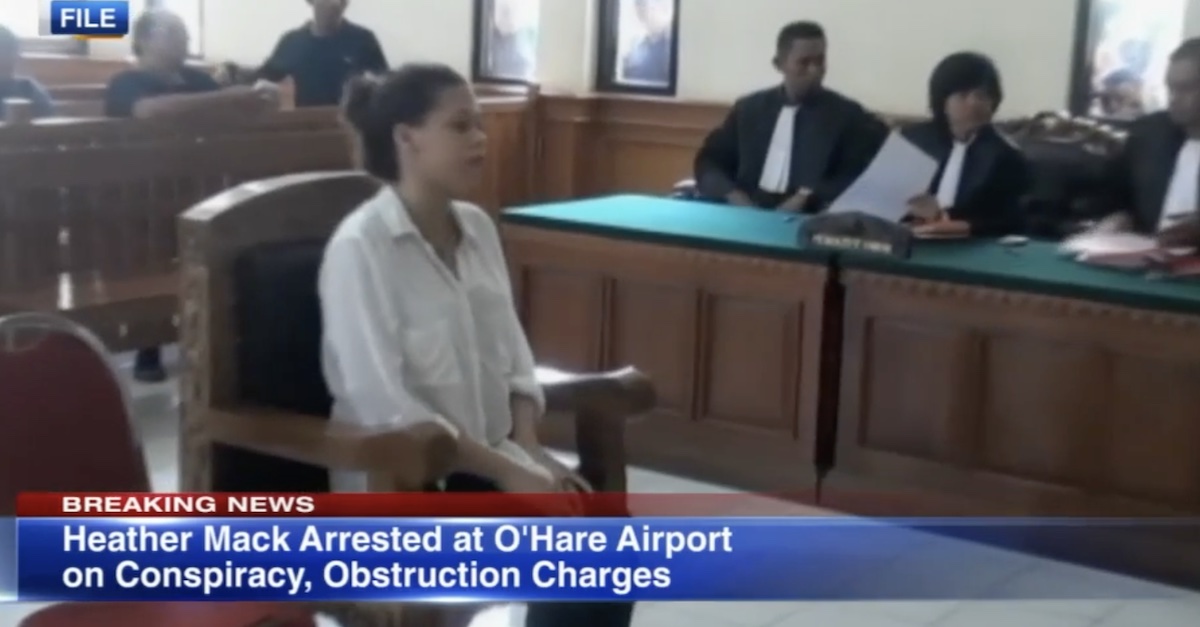 A Chicago woman recently released from an Indonesian prison after being convicted of brutally killing her socialite mother in a luxury Bali hotel and hiding the body in a suitcase was arrested upon returning to the U.S. and charged with conspiring to commit murder.

Agents with the FBI took 26-year-old Heather Mack into custody on Wednesday morning immediately after her flight landed at Chicago O’Hare International Airport.

In a federal indictment unsealed Wednesday in the U.S. District Court for the Northern District of Illinois, Mack and her then-boyfriend Tommy Schaefer are charged with conspiracy to commit the murder of Mack’s mom, 62-year-old Sheila von Wiese-Mack, and obstruction of justice. Schaefer was also convicted by an Indonesian court in Wiese-Mack’s 2014 murder and is still serving an 18-year prison sentence in that country.

Federal prosecutors allege that Mack and Schaeffer “conspired with each other to commit at a place outside the United States, namely, in the Republic of Indonesia, an act that would constitute the offense of murder.”

The pair are also accused of having “corruptly destroyed, mutilated and concealed objects, and attempted to do so, with intent to impair the object’s integrity and availability for use in an official proceeding, by forcing the body of Sheila A. Von Wiese into a suitcase after she had been killed and removing the suitcase from the place of the murder; and by removing linens and items of clothing worn during the killing.”

According to a report from the Chicago Sun-Times, Mack’s attorney Brian Claypool on Tuesday warned that there was “going to be a war” if federal authorities arrested Mack upon her return to the country.

“It’s gonna be a dogfight, because they are being punitive toward Heather,” he reportedly told the outlet.

Claypool did not immediately respond to an email from Law&Crime.

Mack had served seven years of a 10-year prison sentence before she was released from Indonesia’s Kerobokan prison on Oct. 29. She then spent several days at the country’s Immigration Detention Center while her travel itinerary to the U.S. was finalized.

In 2014, a then-18-year-old Mack and a then-21-year-old Schaefer were arrested by Indonesian police after authorities discovered Wiese-Mack’s body stuffed in a suitcase and left in the trunk of a taxi parked in front of the upscale St. Regis Bali Resort.

CCTV footage from the hotel reportedly showed Schaefer and Wiese-Mack arguing in the hotel lobby. Hours later, Schaefer, then 21, beat Wiese-Mack to death by repeatedly hitting her in the head with a fruit bowl. Mack, who was pregnant at the time, then reportedly helped wrap her mother’s remains in a sheet and stuffed the victim’s body in the luggage. Mack and Schaefer placed the suitcase in the trunk of the taxi before fleeing. The cab driver reportedly noticed blood leaking from the luggage and alerted police. Authorities arrested the couple later that evening at a hotel approximately six miles away from the St. Regis resort.

Schaefer would later admit to killing Wiese-Mack, though he maintained that the killing was in self-defense. He said Wiese-Mack attacked him after learning her daughter was pregnant. But U.S. authorities continued to probe the circumstances of the killing and others who may have been involved.

In June 2017, one month before the sealed indictment against Mack and Schaefer was filed, Schaefer’s cousin was sentenced to nine years in prison after pleading guilty to one count of conspiracy to commit the murder of Wiese-Mack. A then-26-year-old Robert Ryan Justin Bibbs admitted that Mack had offered him $50,000 to kill her mother.

“In approximately late July or early August 2014, Mack told Bibbs that she wished her mother was dead and she asked Bibbs whether he knew someone who would kill her mother in exchange for money,” the Justice Department said in a 2017 press release. “Bibbs knew that Von Wiese was wealthy and that she and Mack were taking a vacation in Indonesia in early August 2014. Schaefer had conveyed to Bibbs that Mack was planning to kill her mother while they were overseas and that Schaefer intended to travel to Indonesia to join Mack.”

Text messages between Schaefer and Bibbs allegedly showed Bibbs knew Von Wiese’s murder was “imminent” and that Schaefer “expected to receive millions,” some of which would go to Bibbs.

According to the Sun-Times, federal prosecutors in the Bibbs case filed court documents in 2017 saying that he was “significantly less culpable than Schaefer and Mack” in Wiese-Mack’s death.