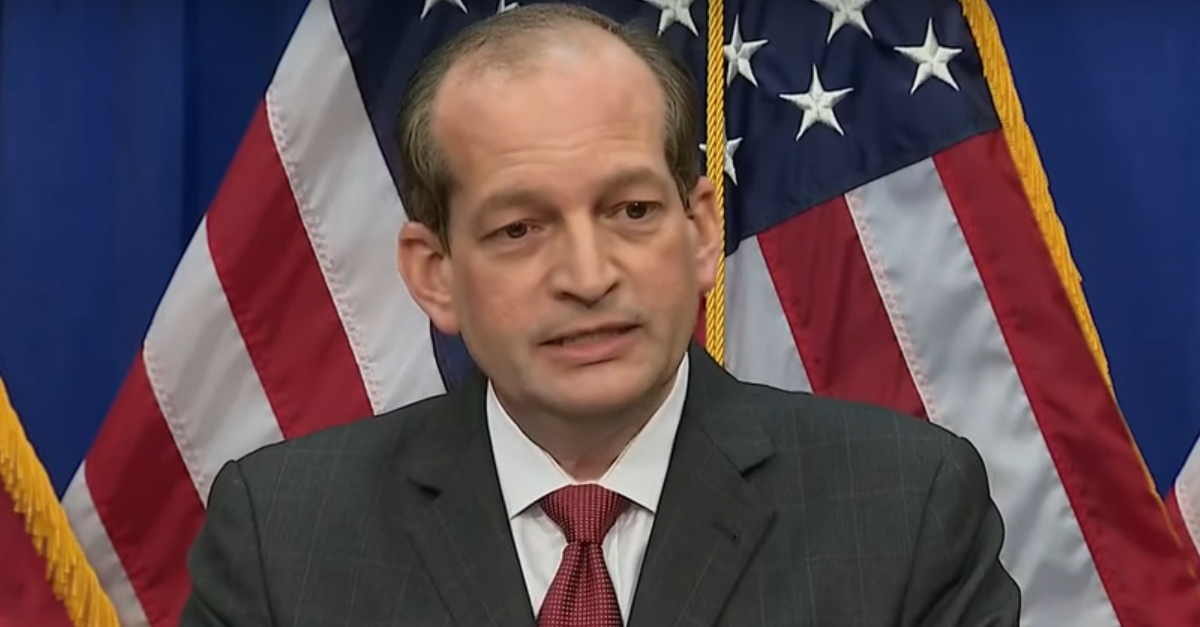 Labor Secretary Alexander Acosta has resigned from his post after holding a press conference in which he defended the Jeffrey Epstein plea deal. President Donald Trump reportedly said it was Acosta’s decision.

Alex Acosta is out, Trump says. POTUS says it was Acosta’s decision to resign as Labor Secretary. Appearing together on South Lawn.

Despite overwhelming evidence that Epstein sexually abused numerous underage girls in 2008, Acosta, then the U.S. Attorney for the Southern District of Florida, allowed Epstein to plead guilty to state charges for soliciting prostitution from a minor. Epstein was sentenced to 13 months in jail, which he served in a private wing of the Palm Beach state prison and was permitted to leave the premise for 12 hours a day, six days a week as part of a work release pass.

It seems the Wednesday presser proved pointless. Acosta did not apologize, he declined to answer key questions directly and he shifted blame to state authorities, particularly on the work-release absurdity for a wealthy registered sex offender like Epstein. Acosta even said that if it wasn’t for his office stepping in, Epstein would have walked. Many have argued that’s what happened anyway.

Acosta “should not be allowed to rewrite history,” Krischer said in a statement after the press conference. Krischer mentioned that federal prosecutors drafted a 53-page indictment of Epstein.

“If Mr. Acosta was truly concerned with the State’s case and felt he had to rescue the matter, he would have moved forward with the 53-page indictment that his own office drafted. Instead  Mr. Acosta brokered a secret plea deal,” Krischer said.

Legal observers have noted that prosecutors do not normally draft an indictment of that length only to cut their losses.

/2 If there was a lengthy draft indictment, that is completely inconsistent with Acosta's description of an office that had serious doubts about whether it could make a case.

yes its unusual but its also unusual for the prosecutors to have had a 53 page draft indictment ready to go and to shelve it. . .

Acosta has said that he was pleased with the Southern District of New York’s new child sex-trafficking prosecution of Epstein.

“Let me start by reiterating that I’m pleased that the New York prosecution is going forward. They brought these charges based on new evidence against Jeffrey Epstein,” Acosta said. “And this is a very very good thing.”

“Particularly problematic was the Government’s decision to conceal the existence of NPA [non-prosecution agreement] and mislead the victims to believe that federal prosecution was still a possibility,” Marra wrote.

When questioned why his office allowed Epstein’s plea deal to immunize his named and unnamed co-conspirators, a move critics have decried as unprecedented, Acosta avoided answering the question directly.

“The purpose in this case was to bring Epstein to jail, to put him behind bars. And so there were other individuals that may have been involved, in any type of conspiracy there are individuals around someone, the focus really is on the top player. And that’s where our focus appropriately was,” he said.