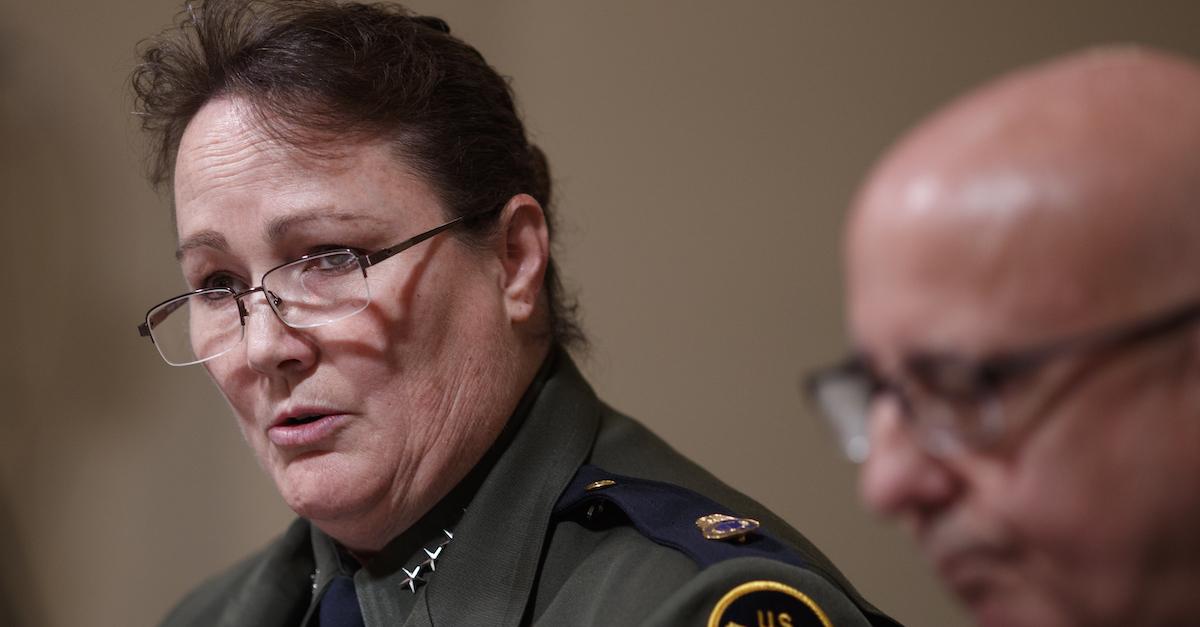 The Border Patrol Chief who released a statement expressing outrage after it was reported that current and former agents made xenophobic, misogynistic and racist comments in a secret Facebook group known as “I’m 10-15″ was reportedly a member of that group.

Carla Provost, the Intercept reported on Friday, made a comment in the group in her own defense when someone else questioned how she got her promotion; this was just three months after she was appointed to her position. Someone had left a comment questioning Provost’s meteoric rise in the ranks, and she left a pretty straightforward response.

“It was actually three years… hard to turn down after they offer it to you… just saying,” she said.

What was remarkable about this is that Provost was posting in the group at all, particularly since the statement she made after the reveal of the Facebook group read like she had no idea “inappropriate” comments were made there.

“These posts are completely inappropriate and contrary to the honor and integrity I see—and expect—from our agents day in and day out,” she said. “Any employees found to have violated our standards of conduct will be held accountable.”

Assistant Commissioner of the Office of Professional Responsibility Matthew Klein at the time called the social media activity “disturbing,” saying that Border Patrol was “made aware” of it. Provost was at least aware of the group.

Provost’s statement came in response to a ProPublica report about border patrol agents’ behavior in the online group “I’m 10-15,” after the 10-15 Border Patrol code which means “aliens in custody.” Members joked in one instance about a 16-year old Guatemalan migrant who died in Weslaco, Texas while in the custody of Border Patrol agents in May. One group member responded by posting a GIF of Sesame Street’s Elmo shrugging accompanied by the words “Oh well.”Another responded with an image of Dolph Lundgren from the movie Rocky IV and text of his character’s line, “If he dies, he dies.”

Another member commented on an article about Reps. Alexandria Ocasio-Cortez (D-N.Y.) and Veronica Escobar (D-Texas), saying, “Let’s start a go fund me for one CTX agent brave enough to throw a 10-15 burrito at one of these bitches. Whoever does it takes the pot of $$$.”

Another member made comments on an image taken by an Associated Press photographer that made national headlines. The image showed a Salvadoran father and his young daughter who had drowned in the Rio Grande while attempting to reach the United States. They have since been identified as Óscar Alberto Martínez Ramírez and his 23-month-old daughter Angie Valeria.

“Ok, I’m gonna go ahead and ask…have ya’ll ever seen floaters this clean. I’m not trying to be an a$$ but I HAVE NEVER SEEN FLOATERS LIKE THIS, could this be another edited photo. We’ve all seen the dems and liberal parties do some pretty sick things,” a comment said.

As the Intercept reported, supervisors were among the individuals posting offensive content online:

By all indications, group member Thomas Hendricks was something of an edgy memelord in “I’m 10-15,” never cowering before the politically correct demands of so-called “snowflakes.” When Hendricks appeared to disappear from the group last summer, his stature and mystique grew, prompting “who is Tom Hendricks” and “we are all Tom Hendricks” style posts.

The truth, as ProPublica reported this week and as comments reviewed by The Intercept indicate, is that Hendricks appears to be a supervisor in the Border Patrol Calexico station with more than two decades on the job. He returned to “I’m 10-15” on June 21, posting “That’s right bitches. The masses have spoken and today democracy won. I have returned. To everyone who knows the real me and had my back I say thank you. To everyone else? This is what I have to say…”

Hendricks then included an image of a smirking Donald Trump forcing Ocasio Cortez’s face into his crotch by the back of her neck.

ProPublica identified Hendricks as a “20-year veteran of the Border Patrol who serves as a supervisor of the Calexico station, a desert outpost in Southern California’s Imperial County.”