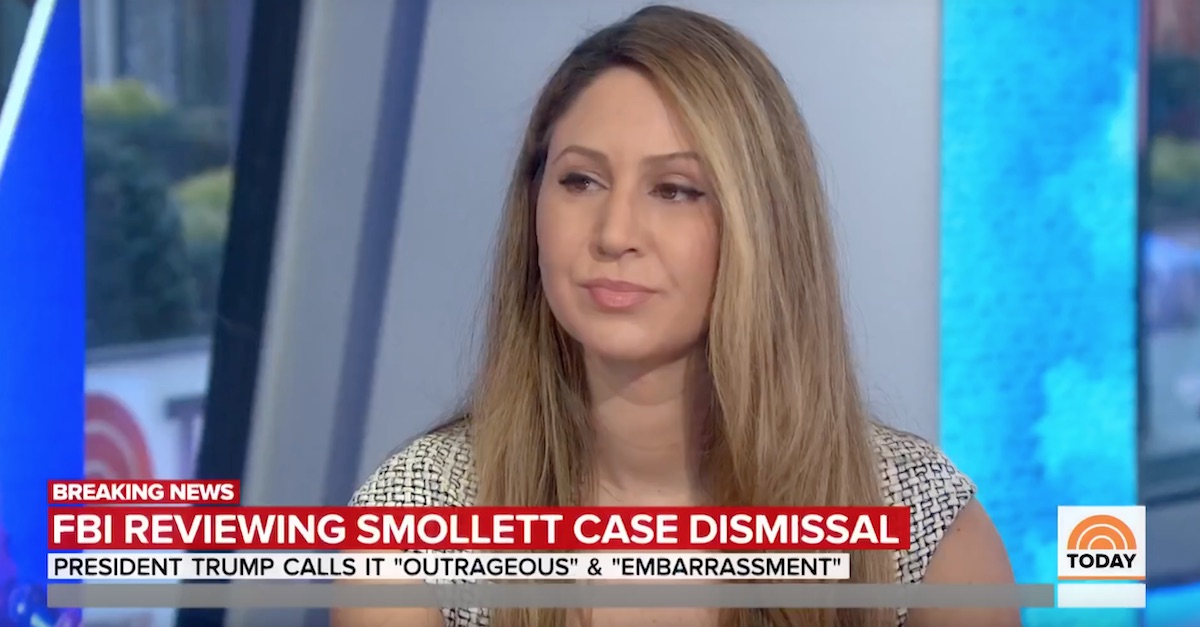 Abimbola “Bola” Osundairo, one of the Nigerian bodybuilder brothers at the center of the Jussie Smollett debacle, claimed in a lawsuit filed on Tuesday that one of Smollett’s lawyers defamed him and endangered his family members by suggesting that he may have had a gay relationship with Smollett.

The claim can be traced to remarks Smollett attorney Tina Glandian made on the Reasonable Doubt podcast. At around the 27:00-minute mark of thepodcast, Glandian puts forth a theory about why the Osundairos might be lying about what happened the night Smollett claimed he was the victim of a racist, MAGA-related homophobic assault.

“About 10 days before the incident, Abel [who also goes by Bola] actually spent the night at Jussie’s place,” Glandian said. “My theory at least is that, you know, the older brother who lived with Abel saw that his younger brother didn’t come home, started wondering what this relationship really is.”

“Keep in mind Abel is also playing the role on the show [Empire] is that stand-in for Jussie’s love interest,” she said. “It’s one thing he’s playing this character, and now he’s hanging out with this openly gay man, and now he spent the night here.”

The podcast episode dates back to April 6, which was after Cook County prosecutors decided to drop charges against Smollett.

In the lawsuit filed Tuesday by Bola and Ola Osundairo, these and other remarks were cited as evidence that their reputations were ruined by defamatory statements made by Smollett’s attorneys. Both Glandian and attorney Mark Geragos were named as defendants. The Osundairos claim that these statements, have damaged their reputations and careers. They demand a jury trial and “appropriate compensatory damages, punitive damages and costs.”

Bola said that Glandian’s theory about him having sex with Smollett was not simply false — it put their Nigerian family members at risk.

Same-sex sexual activity is illegal in Nigeria, which can result in 14 years of imprisonment. If the accused is married, the punishment is death by stoning.

Research by Pew indicates that 99% of Nigerians believe homosexuality should not be tolerated. Ms. Glandian’s globally broadcasted statements that Bola Osundairo is homosexual endangers him and the lives of his Nigerian family.

The suit said that Glandian’s public suggestion, which happened after the charges were dropped against Smollett, was “patently false.”

“Ms. Glandian inferred that Bola Osundairo and Mr. Smollett engaged, at least briefly, in homosexual acts together. These statements were made to the third-party press and public,” the lawsuit said. “Bola Osundairo is heterosexual and was dating a woman at the time.”

Geragos and Glandian told Law&Crime in a statement that the Osundairos’ lawsuit was a “comical legal document.”

“At first we thought this comical legal document was a parody. Instead this so-called lawsuit by the brothers is more of their lawyer driven nonsense, and a desperate attempt for them to stay relevant and further profit from an attack they admit they perpetrated,” they said. “While we know this ridiculous lawsuit will soon be dismissed because it lacks any legal footing, we look forward to exposing the fraud the Osundairo brothers and their attorneys have committed on the public.”

Editor’s note: This story was updated after publication with a statement from Geragos and Glandian.