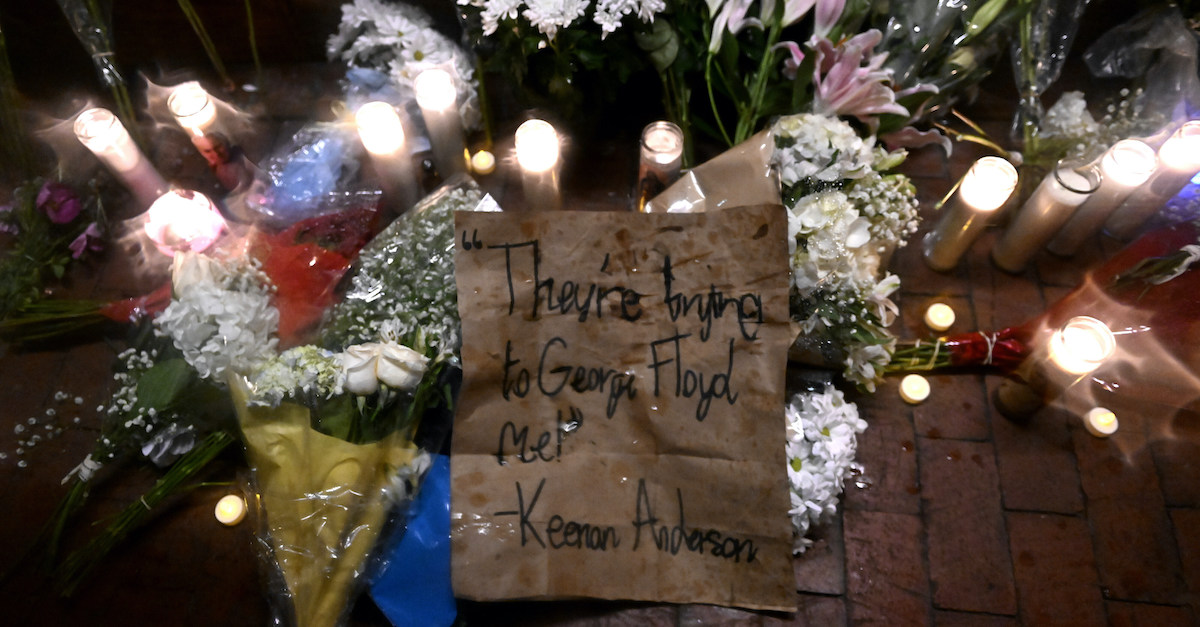 A sign on a makeshift memorial with a quote by Keenan Anderson is displayed during a vigil in Los Angeles on Saturday, Jan. 14, 2023, for Anderson, the cousin of Black Lives Matters co-founder Patrisse Cullors. (Keith Birmingham/The Orange County Register via AP)

The cousin of the co-founder of the Black Lives Matter movement, who died earlier this month in Los Angeles police custody, was mourned this weekend during two candlelight vigils, as outrage mounts over the Taser use that preceded his death.

One makeshift memorial seen in Los Angeles on Saturday quoted the now-late California father Keenan Anderson’s remarks before he died: “They’re trying to George Floyd me!”

Protesters in Minneapolis, Minnesota, where Floyd was murdered, saw a connection between the two incidents as well. That city held a similar vigil on Sunday.

Shortly before the weekend, the NAACP Legal Defense Fund said in a press release the LAPD deployed that Taser for “an unconscionable length of time.”

Anderson’s death also captured public attention because of a family connection. He was the cousin of Black Lives Matter co-founder Patrisse Cullors.

“Despite already being restrained by multiple officers — who immobilized his legs, kneeled on his back, and proceeded to handcuff him — Mr. Anderson was nevertheless repeatedly tasered,” the statement reads. “An LAPD officer tased Mr. Anderson six to seven times for approximately 45 seconds – an unconscionable length of time that is inconsistent with widely supported guidelines.”

On Wednesday, Jan. 11, 2023, the department released an edited, nearly-20-minute long video that splices together various officer body-worn camera footage of the interactions between Anderson and numerous LAPD officers – as well as one cellular phone video captured by a witness. In that footage, an officer can be seen deploying a Taser on Anderson at least six times for nearly 30 seconds total.

In a press release, police said the West Traffic Division motor officer who was flagged down by Anderson saw the deceased man “running in the middle of the street and exhibiting erratic behavior.”

In the responding officer’s body-worn camera footage, Anderson complies with commands to sit down on the street after at least one other person alleges he was responsible for the traffic accident.

“As additional units arrived at scene, Anderson suddenly attempted to flee the location,” the LAPD press release continues. “Officers gave chase as Anderson ran eastbound in the middle of the street on Venice Boulevard. As officers contacted Anderson, he began to resist, resulting in a use of force. Officers struggled with Anderson for several minutes, utilizing a TASER, bodyweight, firm grips, and joint locks to overcome his resistance.”

In a news conference last week, LAPD Chief Michel Moore said the officer used the Taser on Anderson six times total over a period of 42 seconds.

“In my preliminary review of this incident, it’s unclear what the role of that Taser was,” the police chief said. “To be clear, it’s dependent on the totality of our investigative resources, but also on medical records from the hospital as well as a coroner’s report and their formal and forensic level examination. As this investigation continues, however, I will pay close attention to the use of the Taser.”

The death of Anderson, a 31-year-old Black father and high school English teacher, has resulted in harsh criticism of police in Los Angeles and calls from Black Lives Matter – Los Angeles for Moore to be fired.

In their statement, the NAACP LDF does not mention the LAPD’s leadership, but, rather, focuses on standards and practices.

“This is yet another example of the ways in which law enforcement officers often escalate a situation through violence and brutal force during incidents in which armed personnel need not be involved at all,” the civil rights group says. “It also underscores the need for policymakers to prioritize the implementation of effective alternative responses to incidents where there is no actual threat to public safety to compassionately respond and provide needed services without resorting to violence.”

The statement also references guidelines issued by “law enforcement organizations such as the International Association of Chiefs of Police and the Police Executive Research Forum.”

According to 2011 guidelines issued by the Police Executive Research Forum, people should not be exposed to an Electronic Control Weapon, such as a Taser-branded stun gun, for more than 15 seconds total. The PERF is an independent research group made up of police chiefs from most of the country’s largest police departments. Moore is currently an at-large board member of the organization.

“Personnel should be trained to use an ECW for one standard cycle (five seconds) and then evaluate the situation to determine if subsequent cycles are necessary,” the PERF guidelines say. “Training protocols should emphasize that multiple applications or continuous cycling of an ECW resulting in an exposure longer than 15 seconds (whether continuous or cumulative) may increase the risk of serious injury or death and should be avoided.”

In 2020, the International Association of Chiefs of Police issued a 20-page report intended to “provide guidance and direction on the use of electronic control weapons” which references the 2011 PERF guidelines and says “agencies may wish to consider imposing a limit of three cycles or a total of 15 seconds absent exigent circumstances.”

In a statement to local Fox affiliate KTTV, the LAPD said Anderson died after going into cardiac arrest. According to the Los Angeles County Medical Examiner’s Office, his cause of death is currently “deferred,” which means a result is “pending additional investigation.”

Anderson was pronounced dead some four hours after the use of force.

“Keenan deserves to be alive right now,” Cullors said in an Instagram post about her cousin. “His child deserves to be raised by his father. Keenan, we will fight for you and for all our loved ones impacted by state violence.”

Law&Crime reached out to the LAPD for comment and additional details. A spokesperson said the video, press release, and Moore’s press conference represent all that “is being released related to the incident.”

A GoFundMe for funeral and memorial expenses remembers Anderson fondly: “Anyone who knew Keenan knew he was full of life and would brighten up a room with his smile.”

A vigil for the deceased was held over the weekend in the Los Angeles neighborhood of Venice – at the intersection where Anderson was tased, shackled, and arrested – and was well-attended despite torrential rain storms that have battered the City of Angels as of late.

A day after dozens arrived in Venice for a vigil for Keenan Anderson, the candles are still going through the rain. pic.twitter.com/gIsyOLRK0E

A vigil was held in Minneapolis as well.

“We extend our deepest condolences to Mr. Keenan Anderson’s family and community in the wake of his senseless and tragic death,” the NAACP LDF said. “That this happened in response to a traffic collision, when Mr. Anderson was unarmed and presented no threat to officers at all, makes the force used by officers inexcusable.”