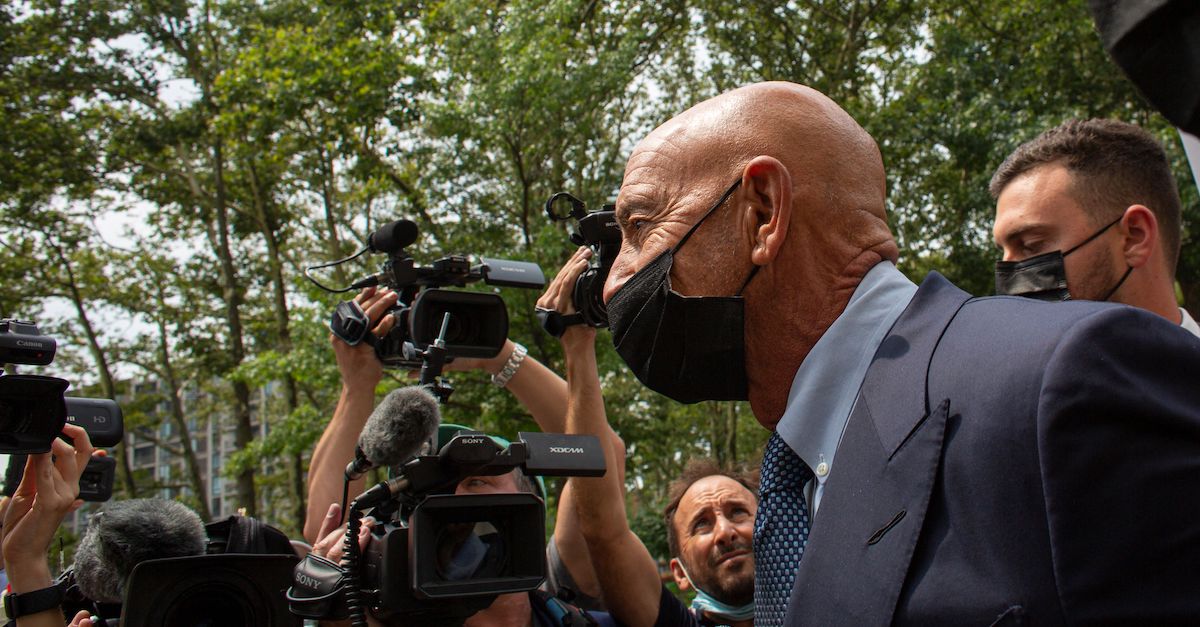 Tom Barrack (R), a close adviser to former President Donald Trump and chair of his inaugural committee, leaves after attending a hearing at the US District Court of Eastern District of New York on July 26, 2021 in New York City. (Photo by KENA BETANCUR/AFP via Getty Images)

Billionaire Thomas Barrack, the one-time chair of Donald Trump’s inaugural committee, wants to prevent prosecutors from telling a jury that his co-defendant whom the government considers a fugitive is accused of lying to the FBI.

Jury selection began on Monday morning in the trials against Barrack and his aide Matthew Grimes. Both are accused of acting as illegal foreign agents for the United Arab Emirates. The third defendant in their indictment, however, will not be in the courtroom: UAE national Rashid Sultan Rashid Al Malik Alshahhi (also known as Rashid Al Malik and Rashid Al-Malik), who remains at large.

On Sunday, Barrack’s attorneys filed a motion seeking to limit what the government could say about Al Malik.

Some of the statements that Barrack’s attorney Michael S. Schachter wants to suppress stem from the FBI’s conversation with Al Malik on March 23, 2018.

Certain details from the conversation are redacted in the motion, but they involved the FBI’s interest about his associations with “the Trump campaign.”

Al Malik then said he had “nothing to do with the Trump Campaign,” before sitting down for an interview with the FBI roughly two weeks later. The government claims that four of Al Malik’s statements during that interview were “lies.”

Barrack’s legal team deny that their client’s UAE associate was lying and also oppose admission of the statements on constitutional grounds.

If Al Malik were standing trial, prosecutors would not have been able to invoke his refusal to speak to the FBI without counsel against him, Barrack’s lawyer noted, citing the Fifth and Sixth Amendments of the U.S. Constitution.

“Introducing these facts at Mr. Barrack’s and Mr. Grimes’s trial is even more prejudicial, since the unspoken insinuation will be that defendants did something wrong, as they must have encouraged Mr. Al Malik to decline an open dialogue with the FBI, instead suggesting that he ‘lawyer up,’ and maybe even lie during his interview,” the motion states.

Barrack stands accused of using his clout within the Trump administration to push the UAE’s “wish list” within the U.S. government and influential news outlets.

In one notable passage of his indictment, Barrack praised the UAE on national television on July 2016, before telling Al Malik in an email that he “nailed it” for the “home team.”

According to the indictment, this was a reference to the UAE, not the United States.

“All parties will need to devote significant time during closing arguments to these five ‘statements’ of Mr. Al Malik and whether they were true or false—which is a complete distraction from the actual allegations in this case, which are predicated upon Mr. Barrack and Mr. Grimes and whether they agreed to act at the direction or control of a foreign government,” the motion states. “The question, for example, of whether Mr. Al Malik was being truthful when he gave his opinion to the FBI regarding the appetite of the UAE Government to meet with President Trump during the 2016 Presidential Campaign is an issue so far removed from the core issues that need to be resolved in this case that the Court should preclude the admission of these statements on the basis of trial efficiency alone.”

Barrack was also charged with obstructing justice by lying to federal agents during an interview on June 20, 2019. Opening statements will begin after a jury is selected.