‘Everything We F***ing Trained for’: Judge in Oath Keepers Trial Will Let Jury Hear Majority of Exchanges on Walkie-Talkie App During Jan. 6 Attack 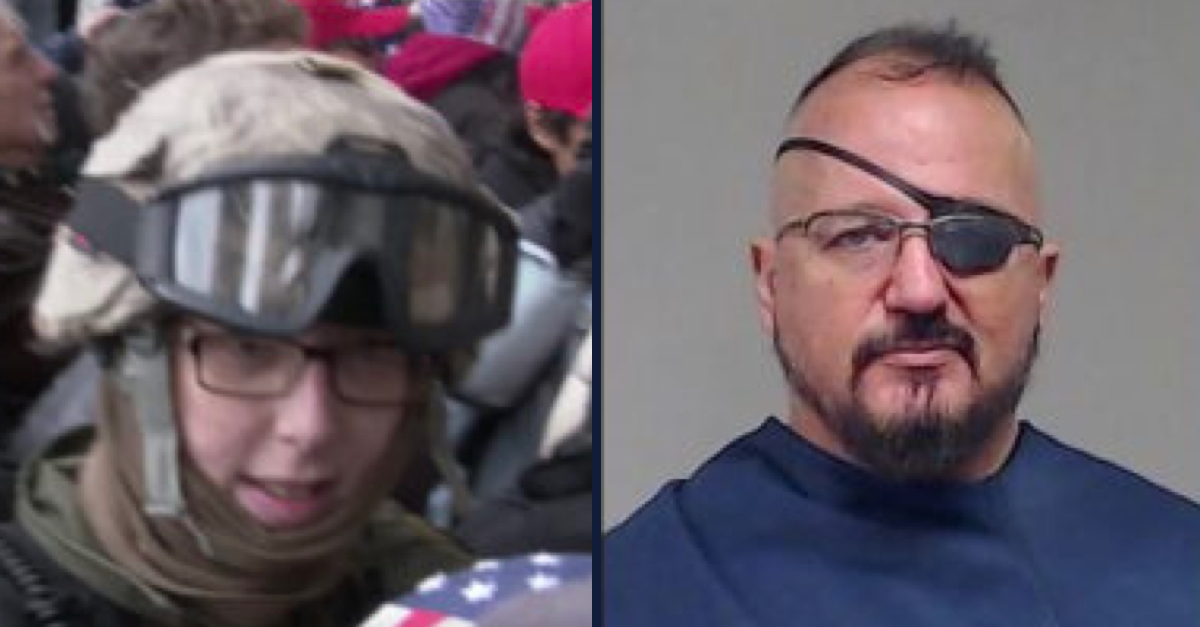 The federal jury in the upcoming case of a handful of members of the right-wing Oath Keepers extremist group will be allowed to hear most of the exchanges between members  that were had on a walkie-talkie-style app during the Jan. 6 attack on the U.S. Capitol.

Jessica Watkins, who is charged with seditious conspiracy alongside Oath Keepers founder Stewart Rhodes and others, had asked U.S. District Judge Amit Mehta to exclude statements allegedly made during a chat between subscribers to a channel on Zello, arguing that they are hearsay, or out-of-court statements offered as evidence to support the truth of what the statement asserts. Prosecutors opposed.

In his ruling on Monday, Mehta said that all of Watkins’ statements that the government wanted the jury to hear are admissible, but that he will block statements made by some people who participated in the conversation who are not named as defendants in the case — although he did not appear to buy the defendants’ hearsay arguments.

“Each of Ms. Watkins’ statements on the Zello chat is admissible against her as a statement of a party opponent,” Mehta said in his ruling. That determination by the judge implies that he didn’t need to analyze whether the statements were hearsay or not, as statements by a party-opponent aren’t considered hearsay at all.

Watkins’ co-defendants Kelly Meggs and Kenneth Harrelson, as well as Rhodes, had joined in the motion to exclude statements made in the Zello channel.

Watkins, a bartender from Ohio, was allegedly part of two Zello channels that day: “Stop the Steal J6” and “J6 BOTG Team.” Prosecutors, who say that “BOTG” likely stands for “boots on the ground,” intend to establish at trial that Watkins’ handle while participating in these channels on Jan. 6 was “OhioRegularsActual—Oathkeeper.”

In his ruling, Mehta determined that Watkins’ statements are admissible against her co-defendants under different exceptions to the hearsay rule.

In a response to a statement from a user with the name “1%Watchdog” who is not a named co-defendant in this case, Watkins appears to confirm a plan to breach the building. That statement included advising the channel that then-Vice President Mike Pence “is doing his traitorous bullshit” and that “there’s patriots who want to get inside and give their First Amendment speech to these traitorous bastards — treasonous bastards.”

1%Watchdog also refers to then-Senate Majority Leader Mitch McConnell as “Bitch McConnell,” excoriating him for having “rebuked those who are challenging the Electoral College votes that constitute the fucking communist [sic] revolution election steal of 2020 by these treasonous fucking bastards.”

Those “treasonous fucking bastards” are, presumably, the lawmakers who were inside the Capitol on Jan. 6 certifying Joe Biden’s 2020 electoral win over Donald Trump, many of whom were forced to evacuate or shelter in place as Trump supporters forced their way past police and swarmed the building. Multiple studies have failed to show widespread voter fraud in the election, and dozens of lawsuits challenging the results have failed.

“Right, brother,” Watkins said at 1:49 p.m., according to a transcript of exchanges on the Zello channel. “We’re boots on the ground here. We’re moving on the Capitol now. I’ll give you a boots-on-the-ground update here in a few.” Mehta said that this statement is admissible under the “present sense impression” exception to the hearsay rule, because Watkins made it contemporaneously and described an event or condition that she was perceiving firsthand.

Watkins’ statement moment later — that “[w]e have a good group [of] about 30, 40 of us” who are “sticking together and sticking to the plan” — is also admissible under the present sense impression and then-existing state of mind exceptions to the hearsay rule.

Mehta also said that statements made by Watkins between 1:48 p.m. and 1:52 p.m. were made against penal interest, another hearsay exception. A sticking point to getting statements admitted under this exception is that “corroborating circumstances clearly indicate the trustworthiness of the statement.”

Mehta said that statements by Watkins were trustworthy given the context.

“More than two dozen Oath Keepers are alleged to have both acted in concert on January 6th and entered the Capitol building during the time Congress was scheduled to certify the Electoral College vote,” Mehta said. “This number of Oath Keepers and their alleged actions are consistent with Ms. Watkins’ statements.”

However, Mehta declined to admit a batch of statements apparently made by people who are not part of the alleged conspiracy to block the peaceful transition of power that day, determining that their prejudicial value outweighed their relevance to the case.

“None of the speakers during this time, except one, are alleged to be part of the conspiracy or non-conspiring Oath Keepers,” Mehta said of those who allegedly participated in the chat from 2:01 p.m. to 2:24 p.m. “They are not instructing Ms. Watkins on what to do. Nor did Ms. Watkins take any apparent action in response to the statements (contrary to the government’s suggestion at last week’s hearing that the speakers were acting as ‘eyes in the sky’). At most, they appear to be expressing their personal views or communicating play-by-play of the events as they unfolded on television or were reported in the media.”

Mehta added that it was notable that Watkins didn’t respond to the statements, and her next statement was made a half-hour later.

“Thus, even if she was listening to this chatter, as the government contends, the statements appear to have had no immediate effect on her,” Mehta said, adding that there is little relevance to the statements and a great risk of unfair prejudice.

Mehta said that some of the statements made during that time are especially inflammatory. He referred to one statement in particular, made by 1%Watchdog at 2:03 p.m.:

Citizen’s arrest. Arrest this assembly, these fucking treasonous bastards. We have probable cause: treason, acts of treason, election fraud, all kinds of felony crimes. No competent authority, no competent law enforcement authority is standing up to arrest these treasonous bastards. You are executing citizen’s arrest under the constitutional authority of the civilian authority of We the People of the United States, first branch of government, force of last resort. The federal government has fallen, all three branches have fallen, certified by the President of the United States. Congress has fallen; Supreme Court has fallen; Department of Justice, FBI has fallen. You are the last resort to save this republic.

At 2:18 p.m., channel participant SGT E said in the BOTG chat: “Find out where the tunnels exit and block them too.”

Mehta will also keep a jury from hearing some statements made by other people who are not named in the case.

“Patriots, if this doesn’t tell these people that we are not gonna take this lying down, I don’t know what will aside from bloodshed,” a user with the name Badlands said at 2:33 p.m., according to court filings.

“Yeah, guys,” the user 1%Watchdog replied. “NAP, Non-Aggressive Principal. Don’t kill anybody unless you’re being attacked and you’re life’s in danger, then self-defense. But this is a citizen — this is a crime in progress. Felony high-crime treason. Citizen’s arrest is legal. I’m not a lawyer, but consult your lawyer. But just is legal where there’s a felony in progress and no law enforcement is standing up. So fucking take care of business.”

“The modest probative value of these statements in providing context is substantially outweighed by the risk of unfair prejudice,” Mehta said, adding that the comments are “caustic statements by non-co-conspirators that are sufficiently provocative to create a risk of inflaming the jury.”

Some statements will be admitted because they aren’t hearsay at all, Mehta determined.

“Get it, Jess,” FreedomD0z3r91 said at 2:46 p.m., according to court filings. “Do your shit. This is what we fucking lived up for. Everything we fucking trained for.”

This statement, Mehta said, “is not hearsay and is admissible for its effect on the listener.” Moreover, the judge added, even if it offered for the truth of the matter asserted, it’s admissible as a co-conspirator statement made during and in furtherance of the conspiracy.

The trial of Watkins, Rhodes, and others is set to start on Sept. 27.