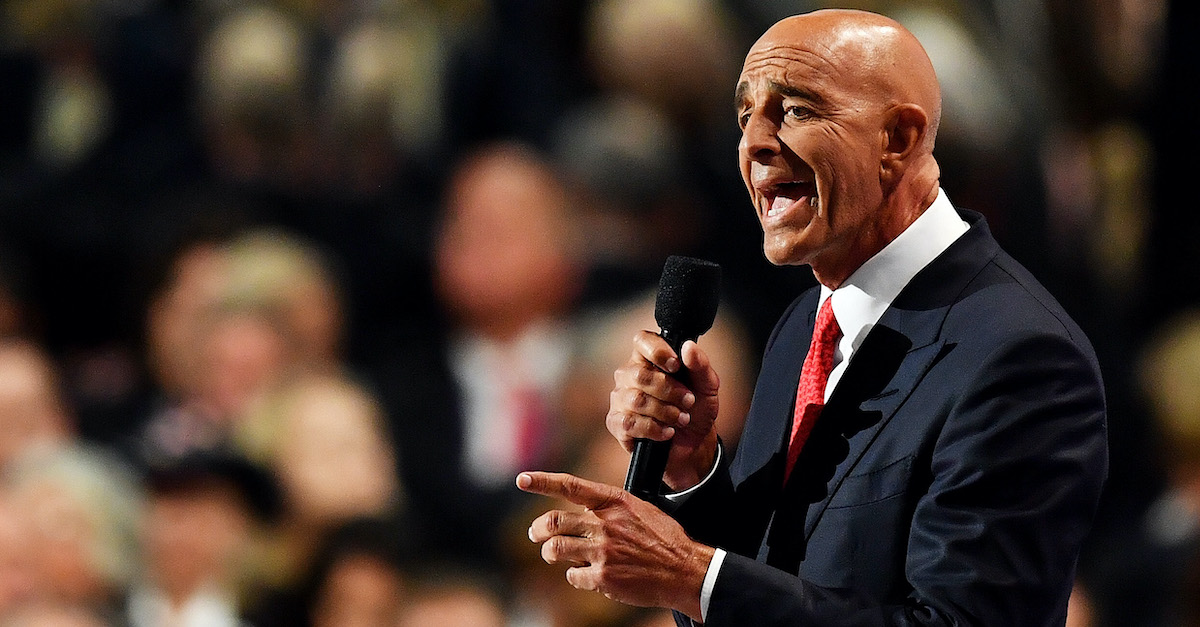 Thomas Barrack, a former chairman of Donald Trump’s inaugural committee and confidant of the 45th U.S. president, acted as an unregistered agent of the United Arab Emirates government and lied to the FBI about it, federal prosecutors alleged in announcing his arrest on Tuesday morning.

Barrack, 74, and Grimes, 27, were both arrested and will be arraigned in the Central District of California. Alshahhi fled the United States three days after being interviewed by law enforcement in April 2018 and remains at large, prosecutors claim.

In an email to Law&Crime, Barrack’s attorney Matt Herrington of the firm Paul Hastings signaled his client’s plans to fight the charges.

Grimes’s lawyer Michael Freedman did not immediately respond to an email requesting comment. Both lawyers appeared in court late on Tuesday before U.S. Magistrate Judge Patricia Donahue, who ordered both men to remain in jail before follow-up detention proceedings on Monday morning. When she heard the government’s request to keep Grimes in pre-trial detention, Judge Donahue remarked that Colorado man posed a “very serious risk of flight.” The judge did not hear arguments over Barrack’s detention.

“Without Disclosing Their True Allegiences”

In a statement, Acting Assistant Attorney General Mark Lesko of the Justice Department’s National Security Division alleged that the trio “repeatedly capitalized on Barrack’s friendships and access to a candidate who was eventually elected President, high-ranking campaign and government officials, and the American media to advance the policy goals of a foreign government without disclosing their true allegiances.”

Trump’s name does not appear on the indictment or the U.S. Attorney’s office press release, but the allusions to the former president are unmistakable.

Lesko claims that Trump was one of the people betrayed by Barrack’s alleged actions.

“The conduct alleged in the indictment is nothing short of a betrayal of those officials in the United States, including the former President,” Lesko wrote. “Through this indictment, we are putting everyone — regardless of their wealth or perceived political power — on notice that the Department of Justice will enforce the prohibition of this sort of undisclosed foreign influence.”

All three are charged with two counts alleging a violation of and a conspiracy to violate 18 U.S.C. Section 951(a), the same statute used against Russian agent Maria Butina.

Barrack originally fell under scrutiny over the course of ex-special counsel Robert Mueller’s investigation into Russian interference in the 2016 presidential election.

Questioned by Mueller’s team, Barrack is one of the men credited—along with Roger Stone—with recommending Paul Manafort to Trump’s campaign.

“Barrack suggested to Trump that Manafort join the Campaign to manage the Republican Convention,” the Mueller report states. “Stone had worked with Manafort from approximately 1980 until the mid-1990s through various consulting and lobbying firms. Manafort met Trump in 1982 when Trump hired the Black, Manafort, Stone and Kelly lobbying firm.”

Barrack’s name appears only four times in the report, in a section about Manafort joining the Trump campaign.

In 2018, Barrack’s name also surfaced in reports that Mueller had been looking into donations to Trump’s inaugural committee allegedly coming in from sources tied to Russia and Arab nations.

In March this year, Barrack announced he would step down as executive chairman of Colony Capital, a company he founded.

After serving as the chair of Trump’s inaugural committee in 2017, the billionaire Barrack informally advised senior U.S. government officials on foreign policy in the Middle East, prosecutors say.

“Barrack also sought appointment to a senior role in the United States government, including the role of Special Envoy to the Middle East,” his indictment states.

Prosecutors claim that Barrack lied to the FBI during a June 20, 2019, interview, months after the release of the Mueller report. Barrack falsely claimed that Alshahhi never asked him to do anything for the UAE and never proffered any policies or requests to the billionaire on that government’s behalf, according to the indictment.

This and other alleged false statements on that day form the basis of five counts of the indictment: one accusing Barrack of obstructing justice and four charging material false statements.

The 46-page indictment details the purported communications between the three co-defendants and five unidentified Emirati officials.

Those Emirati officials are said to included a UAE leader who “held a high-ranking position in its armed forces,” “a high-ranking official” in the UAE with “responsibilities related to its national security,” a member of the UAE’s Supreme National Security Council, and a “high-ranking” UAE diplomat.

The quoted communications date back to May 1, 2016, when Alshahhi and Barrack allegedly met with two of the Emiratis in the UAE.

“That same day, Barrack emailed Alshahhi to ask whether Emirati Official 2 had been satisfied with the meeting,” the indictment states. “Alshahhi replied, ‘Beyond expectations and excited to move forward! And asked for
more great ideas.'”

On May 9, Alshahhi informed Barrack that “Emirati Official 4” confirmed that Barrack would be “the only channel to the Candidate” for the UAE, according to the indictment.

After Barrack repeatedly praised the UAE on national television on July 18, 2016, the billionaire told Alshahhi in an email that he “nailed it” for the “home team,” referring to the UAE, not the United States, according to the indictment.

Prosecutors claim that Barrack’s Emirati contacts helped shape an op-ed the billionaire wrote before the election and sent a “wish list” for Trump’s first 100 days in office during the transition period.

“Strikes at the Very Heart of Our Democracy”

In a letter seeking Barrack’s detention, prosecutors called the evidence of his guilt “overwhelming.”

“The defendant is charged with extremely serious offenses based on conduct that strikes at the very heart of our democracy,” Assistant U.S. Attorney Nathan D. Reilly wrote in the letter. “The defendant is alleged to have capitalized on his position of significant influence as an outside advisor to the campaign and the administration and as a national media figure with regularly televised interviews on major news networks to further the interests of the UAE as directed by senior UAE officials and their intermediaries.”

Supporting their arguments for the billionaire’s detention, prosecutors note that Barrack has “significant connections” to countries with no extradition treaties: like Lebanon, where he holds citizenship.

Prosecutors claim that Barrack would “would potentially have the
assistance of their highest leaders” if he successfully fled via his private jet to those countries.

Citing a “very serious risk of flight,” a federal judge in California ordered Grimes preliminarily detained at a hearing on Tuesday afternoon. She set follow-up proceedings on Monday at 10 a.m. Pacific time to reconsider a request by Grimes for a $2 million bond.

Barrack’s detention request will be heard on that date at 8 a.m. Pacific Time.