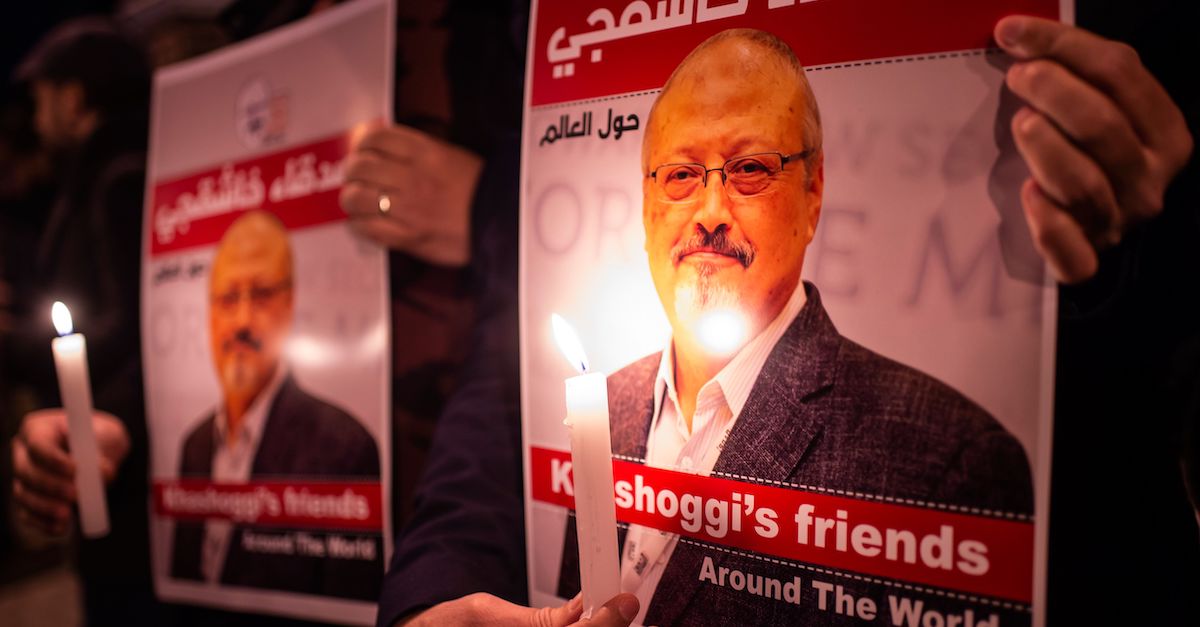 People hold posters picturing Saudi journalist Jamal Khashoggi and lightened candles during a gathering outside the Saudi Arabia consulate in Istanbul, on October 25, 2018.

Some two years after the reported existence of an unclassified report implicating Saudi Arabia’s Crown Prince Muhammed bin Salman in Washington Post journalist Jamal Khashoggi’s murder, the agency released the document—which lived up to rumors of its contents—on Friday.

“We base this assessment on the Crown Prince’s control of decision-making in the Kingdom, the direct involvement of a key adviser and members of Muhammad bin Salman’s protective detail in the operation, and the Crown Prince’s support for using violent measures to silence dissidents abroad, including Khashoggi,” the summary continues.

The intelligence community’s candid assessment, released years after Congress mandated its disclosure, was widely praised by transparency advocates, and it was shortly followed by a new wave of sanctions by the U.S. Treasury—which do not reach the Crown Prince.

Seeking paperwork to marry this fiancée Hatice Cengiz, Khashoggi walked into a Saudi consulate in Istanbul on Oct. 2, 2018, where he was killed and dismembered. Khashoggi’s supporters and U.S. lawmakers have fought to reveal more about what intelligence officials knew about his death for more than two years since that time, in the face of stiff resistance from then-President Donald Trump’s administration.

In early 2019, Congress passed a law giving the Trump administration 30 days to release an unclassified version of the Director of National Intelligence’s report providing “a determination and evidence with respect to the advance knowledge and role of any current or former official of Saudi Arabia.” But that deadline passed for nearly two years, as Khashoggi’s supporters filed a federal lawsuit for the transparency that Trump refused. Those efforts met with mixed success.

Congress wanted the intelligence agency to name Saudi names, and the report provided them.

“We have high confidence that the following individuals participated in, ordered, or were otherwise complicit in or responsible for the death of Jamal Khashoggi on behalf of Muhammad bin Salman,” the report states, naming 20 people, including senior Saudi official Saud al-Qahtani, his subordinate Maher Mutreb, who allegedly coordinated and executed the operation; its participant Naif al-Arifi and others.

They are among 16 Saudis subject to the Treasury’s new wave of sanctions under the Global Magnitsky Human Rights Accountability Act, named after the Russian whistle-blower whose death in a Moscow prison sparked global outrage against Vladimir Putin’s government.

According to the New York Times, President Joe Biden’s administration has disappointed many human rights advocates—even as he turns the page from his predecessor’s information blackout—by declining to punish the Crown Prince as too costly to the U.S.-Saudi relationship. But the intelligence community found it implausible that such an operation would occur without the Crown Prince’s authorization.

“Since 2017, the Crown Prince has had absolute control of the Kingdom’s security and intelligence organizations, making it highly unlikely that Saudi officials would have carried out an operation of this nature without the Crown Prince’s authorization,” the report states.

Trump’s longtime refusal to release the report, in defiance of a congressional mandate, drew scrutiny about the administration’s ties to the Kingdom, particularly those of the 45th president’s son-in-law Jared Kushner. Khashoggi’s brutal killing sparked global condemnation and attention to Saudi Arabia’s human rights abuses, a subject that the regional competitors in the Turkish government were eager to exploit and the Kingdom long hoped to bury.

Renewed attention to the journalist’s death is expected to roil U.S.-Saudi relations, and shortly before the report’s release, the White House released a readout of a call between President Joe Biden and Saudi Arabia’s King Salman bin Abdulaziz al-Saud.

“Together they discussed regional security, including the renewed diplomatic efforts led by the United Nations and the United States to end the war in Yemen, and the U.S. commitment to help Saudi Arabia defend its territory as it faces attacks from Iranian-aligned groups,” the readout states. “The President noted positively the recent release of several Saudi-American activists and Ms. Loujain al-Hathloul from custody, and affirmed the importance the United States places on universal human rights and the rule of law.”

“The President told King Salman he would work to make the bilateral relationship as strong and transparent as possible,” it continues.

During her confirmation hearing for the position of Director of National Intelligence, the agency’s now-leader Avril Haines vowed to the Senate Finance Committee’s Chair Ron Wyden (D-Ore.) to follow Congress’s mandate to make the report public.

“Yes, senator, absolutely, I will follow the law,” Haines said on Jan. 19.

During a recent interview on Law&Crime’s podcast “Objections,” Wyden made clear that he fully expected Haines to live up to that promise, anticipating the release of the report in a “matter of weeks.” His confidence was validated: That interview took place on Feb. 1.

“Jamal Khashoggi never backed down from holding the powerful to account. His courageous journalism cost Jamal his life,” Wyden said in a statement on Friday, praising the report’s release. “Yet, for years, the last administration shielded the Saudi regime from any kind of responsibility or scrutiny.”

Wyden added that the report’s release makes clear that geopolitical considerations of the U.S.-Saudi relationship “won’t wash away the blood.”

“There is still far more to do to ensure that the Saudi government follows international laws,” Wyden said. “There should be personal consequences for MBS—he should suffer sanctions, including financial, travel and legal—and the Saudi government should suffer grave consequences as long as he remains in the government. That accountability also must include justice for Fallon Smart, a Portland girl who was struck and killed by a Saudi national who then fled back home to Saudi Arabia. Fallon’s life ended far too soon and justice for her death has taken far too long.”

Together with the Open Society Justice Initiative, a non-profit suing for more information about Khashoggi’s killing, Wyden held a press briefing warning “it will be open season on journalists everywhere” if the Kingdom’s behavior goes unpunished. The Oregon Democrat is the son of a journalist.

Update — 3 p.m. EST: This story has been updated to include reaction to the DNI report by the Biden administration and the U.S. Treasury’s new sanctions against some Saudis named in it.

Read the four-page report below: