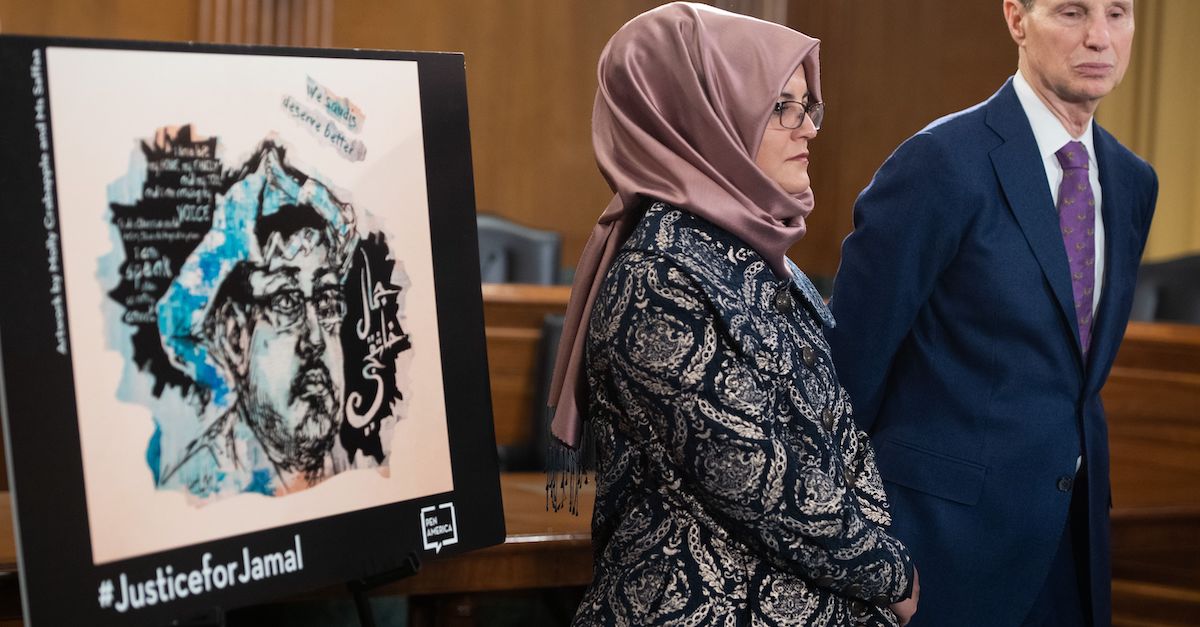 Hatice Cengiz, slain Washington Post columnist Jamal Khashoggi’s fiancee, stands alongside US Senator Ron Wyden, Democrat of Oregon, during a press conference calling for the Trump administration to release details about his killing, on Capitol Hill in Washington, DC, on March 3, 2020.

Listen to the full interview with Senator Wyden on Apple Podcast, Spotify or wherever else you get your podcasts, and subscribe!

After two years of stonewalling from the Donald Trump administration, the long-delayed CIA report into Washington Post journalist Jamal Khashoggi’s murder could become public within a “matter of weeks,” Senator Ron Wyden predicted in a new episode of Law&Crime’s podcast “Objections.”

“The new Director of National Intelligence responded to my question because I authored the law that required the government to release the information they had with respect to who killed Jamal Khashoggi and publish, as my law required, a non-classified report,” Wyden noted, referring to President Joe Biden’s nominee Avril Haines.

Haines made that commitment to the senator during a hearing held on the day before Biden’s inauguration.

“Ms. Haines, if you are confirmed, you have an opportunity to immediately turn a page on the excessive secrecy and lawlessness of the outgoing administration,” Wyden told Haines on Jan. 19. “Congress passed a law requiring the DNI to submit to Congress an unclassified report on who was responsible for the brutal murder of Saudi journalist and U.S. resident Jamal Khashoggi. If you are confirmed, will you submit to Congress the unclassified report required by the law?”

Without hesitation, Haines replied: “Yes, senator, absolutely, I will follow the law.”

Reflecting upon Haines’s answer, the Oregon Democrat said on the podcast: “I think when the new head of National Intelligence at her confirmation hearing gave a specific answer to whether or not she and the Biden administration would comply and she definitively said ‘yes.'”

With Senate Republicans pushing Democrats to forget the U.S. Capitol insurrection, Wyden has urged a longer political memory with a number investigations looking back into the Trump era, including a probe into what he calls Jared Kushner’s billion-dollar bailout from Qatar and the 45th president’s interference into the prosecution of Turkey’s state-run Halkbank as a favor to Turkish strongman Recep Tayyip Erdogan.

Whether the dealings involve Turkey, Qatar and Saudi Arabia, Wyden emphasized that Trump’s coziness with autocrats cannot be forgotten just because he is out of office.

“I would say that Trump’s relationship with some of these authoritarians need to be remembered because they also telegraph what people like Erdogan might be willing to do in the future, if they have the opportunity,” Wyden said, referring at one point to the Turkish strongman’s persecution of a basketball star in his district: Portland Trail Blazers center Enes Kanter. “So this notion that well it’s all past, the end: Erdogan is still there.”

The Turkish government did not respond to an email requesting comment.

As Law&Crime previously reported, Wyden opened a separate investigation with fellow Democratic Rep. Joaquin Castro into the intrigue behind Kushner’s property 666 Fifth Avenue, purchased some 13 years ago at Jared Kushner’s urging for a reported $1.8 billion dollars. A $1.4 billion payment was coming due in February 2019.

“It was against this backdrop that Jared Kushner’s father, Charles Kushner, met in April 2017 with Qatari Finance Minister Sharif Al Emadi, to solicit an investment from Qatar’s sovereign wealth fund for the 666 Fifth Avenue property,” Wyden and Castro noted in a letter announcing their investigation. “According to a financial analyst familiar with the meeting, Charles Kushner asked the Qataris ‘for just under a billion dollars.’”

After the Qataris refused, Kushner reportedly met with with officials from Saudi Arabia and the United Arab Emirates—without U.S. diplomats present—the next month.

Brookfield Asset Management, an investment firm with links to Qatar and the UAE, took over 666 Fifth Avenue ‘s lease in 2019. Its subsidiary Brookfield Property Partners, whose second-largest investor is Qatar, signed the 99-year lease.

“Regarding 666, the fake narrative about Brookfield’s involvement being influenced by Qatar is too dumb to warrant a response or a comment,” Smith wrote through a company spokeswoman.

That remark appeared characteristic of the subjects of the investigation, whom Wyden called uncooperative.

“I would characterize it as stonewalling at every opportunity,” he said on the podcast.

The son of an investigative journalist, Wyden describes his father’s background digging into the Bay of Pigs invasion in detail that surpassed even the knowledge of Fidel Castro as an inspiration for his impulse to interrogate the past.

“My dad always said: ‘Ron, you just got to remember to ask the tough questions. Don’t be unfair. Just ask the questions that people might take a pass on or be reluctant to ask,” Wyden recounted.

Both of his parents’ flight from the Nazi regime also sits with him in the wake of the U.S. Capitol siege.

“I don’t think my parents could have imagined January 6th,” Wyden said, before adding that the rest of the world probably could not have done so either.

Pointing to a common theme between the upcoming Senate trial and other other inquiries of his office, Wyden added: “As I said in connection to the reviews of January 6th, to bring people together, to have unity requires accountability.”

“How do you want this time to be remembered?” Wyden asked. “Do you want this to be a time when domestic terrorists stormed the Capitol, law enforcement officials died, and there were no consequences? That everyone just said, ‘That’s the way it is,’ and moved on?”

With his ascension to Senate Finance Committee chair looming, Wyden invoked the image of Theodore Roosevelt’s famed platform for advancing the topics of importance.

“You get the bully pulpit, and you get to set the agenda,” Wyden said.

“It’s an opportunity to again lay out the facts and really work in a much more expansive way to build support for your ideas, both in the Congress, and in the country,” he added.