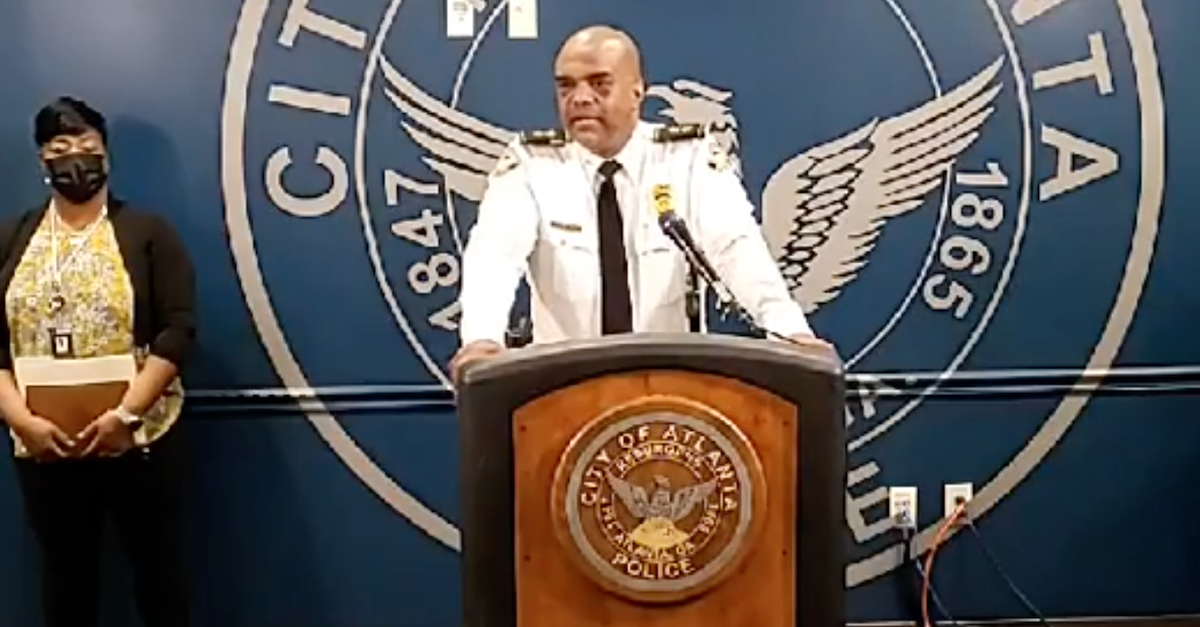 The Atlanta Police Department on Thursday afternoon distanced itself from previous statements made by the Cherokee County Sheriff’s Department in Georgia surrounding the possible motives of accused massage parlor shooter Robert Aaron Long, 21.

Long allegedly admitted that he shot and killed eight people and wounded one other Tuesday at three separate locations, authorities in multiple Georgia jurisdictions have said.

Atlanta Deputy Police Chief Charles Hampton, Jr. began a Thursday afternoon statement by saying he wished to offer his personal “condolences to the families of the victims of this tragic incident.”

“On March 16, a total of eight innocent lives were violently taken by the hands of one lone killer,” he continued. “The Atlanta Police Department continues to offer our support to the Asian American and Pacific Islander communities. We have been in contact via Chief [Rodney] Bryant with many of the civic leaders of these communities.”

Hampton applauded the “joint operation which led to the swift apprehension of the suspect” just three hours after the final killing occurred.  But he quickly pivoted away from Cherokee County’s assertions about the admitted killer’s possible motives.

“We still have an investigation that is still ongoing. Our investigation is separate from Cherokee County’s investigation; the investigation is slightly different,” he said. “We had four Asian females that were killed. And, so, we are looking at everything to make sure that we discover and determine what the motive of our homicides were.”

“It’s important to let you know that we are not done,” he continued in one of several repeated attempts to underscore the point. “In most cases of homicide, we don’t have a quick apprehension . . . and so, again, we’re still working very diligently to ascertain all the facts so we can have a successful prosecution — because that’s what’s most important now.”

Hampton said he was not able to officially release the names of the victims because true verifications of their identities were not yet complete and because the victims’ relatives had not yet officially been notified.  He later said Atlanta police were working with the Republic of Korea’s consulate in order to make the appropriate notifications. He said he anticipated the process would take some time given that the victims’ relatives were overseas.

Assembled reporters immediately asked whether the APD was considering the matter a hate crime.

Cherokee Co. investigators said Wednesday that Long was suffering from a sexual addiction and was having a “bad day.” The latter comment was widely panned by observers as racially insensitive to the underlying facts: Long is a white man; most, but not all, of the victims were Asian women.

The Cherokee County Sheriff’s Department admitted some of the words used by its official, Capt. Jay Baker, had caused “much debate and anger.” The department pointed to Baker’s “ties to the Asian community and his unwavering support and commitment to the citizens of Cherokee County” in a statement which sought to apologize for “any heartache . . . caused.”

Hampton was asked to react to Cherokee County’s original statements.

“I don’t have a position,” he said when thus baited by reporters. “Like I said, I’m only going to comment about our investigation, and again, we’re not prepared to talk a lot about what has been said because, again, we’re not trying to try the case in public. This, again, is a tragic — and, again, we try to remember that eight families are impacted by this. We wouldn’t be doing justice by putting a lot of this information out in the public . . . especially in our cases where next of kin has not been notified.”

Hampton did confirm that Long “frequented both of” the Atlanta locations where the defendant allegedly later admitted to pulling the trigger. Hampton would not say whether Long specifically targeted the individual people he shot and killed.

He did confirm that the APD had in the past responded to “some incidents” at the massage parlors where the shootings occurred but did not go into detail.

Finally, he said that Long “purchased the gun on the day of the incident.” He did not answer questions about whether Long was mentally fit to own a firearm and left the podium as reporters continued to pose questions.

Delaina Ashley Yaun, 33, of Acworth; Paul Andre Michels, 54, of Atlanta; Xiaojie Tan, 49, of Kennesaw; and Daoyou Feng, 44, were all shot and killed at Young’s Asian Massage in Acworth, Ga.

The Los Angeles Times cited the Korea Times of Atlanta to identify two of the employees who were killed at Atlanta’s Gold Spa as Julie Park and Hyun-jeong Park Grant. They were said to be in their 70s and 50s, respectively. However, officials have not confirmed those names and the names of two other victims.

Watch the Thursday news conference below:

[image via video screengrab from the Atlanta Police Department]