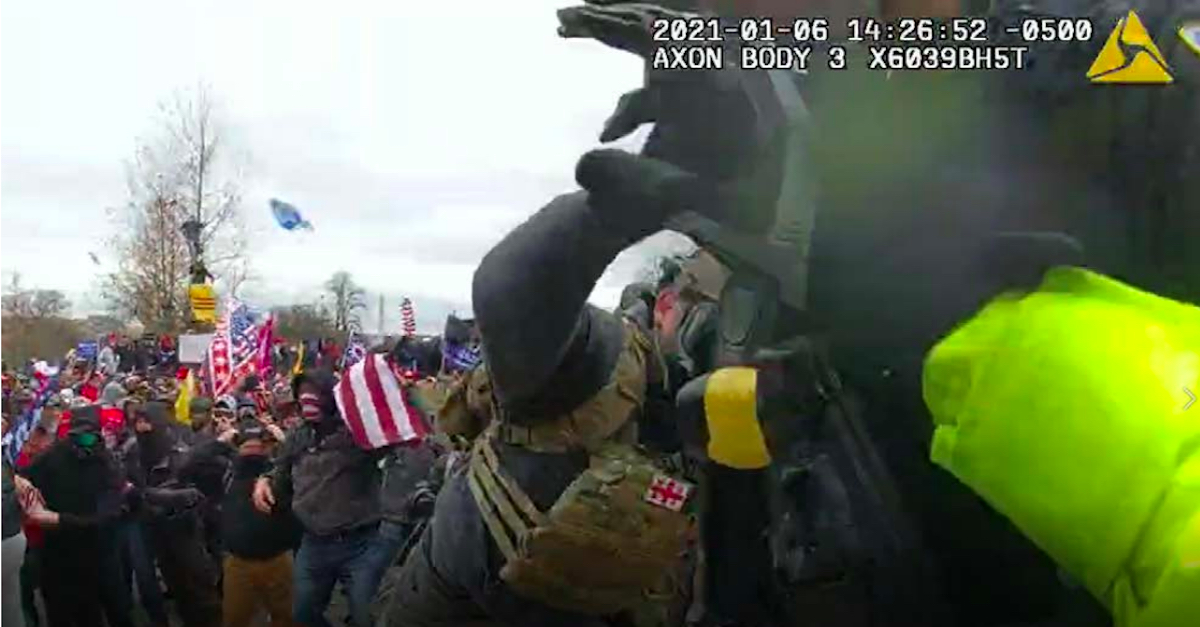 A former member of the U.S. Army Special Forces and military contractor was arrested on Wednesday and charged with felony assault on a police officer using a deadly or dangerous weapon during the Jan. 6 attack on the U.S. Capitol.

In a criminal complaint unsealed Thursday in U.S. District Court in Washington, D.C., federal authorities accused Virginia resident Jeffrey McKellop of using a metal flagpole to beat four officers with the Metropolitan Police Department (MPD Officers 1-4), including one police captain who suffered a laceration near his left eye.

McKellop, who wore a tactical helmet and gas mask that completely covered his face at times during the insurrection, was initially identified based on his bullet-proof vest, which had the Georgian flag patch located over the center of the chest and a Special Forces patch on the back. Authorities also noted that he had a “military-type carrier bag used to hold a gas and/or a chemical protective mask to protect the wearer from harmful chemical irritants.”

Efforts to crowdsource McKellop’s identity through social media platforms resulted in the hashtag “#GeorgesCross” being shared hundreds of times with his picture.

After authorities released pictures of McKellop without the helmet and gas mask in February, two veterans (Witnesses 1 and 2) contacted the FBI to identify him, saying they served with him overseas.

“Witness 2 added the ‘kit,’ specifically the helmet and ballistic vest worn by MCKELLOP in the BOLO photographs was the same gear Witness 1 saw MCKELLOP wearing in an overseas combat zone in 2018,” the criminal complaint stated.

The FBI also uncovered videos posted to social media depicting McKellop carrying a metal flagpole with a “Blue Line National Flag,” as well as a 13-star “Betsy Ross flag” with the words “Trump. Keep America Great” printed on it. As he moved towards the area where the officers would soon be assaulted, he can be seen putting on the aforementioned gas mask and helmet.

According to the criminal complaint, McKellop was captured on film by police body cameras at 2:26 p.m. pushing officers who were trying to prevent the crowd from breaking through the police line and trying to grab the “riot control spray” canister out of the hands of an officer in a lieutenant’s uniform. He then briefly retreated back into the crowd and threw a bottle at officers.

Moments later, McKellop is shown breaching the police line and using his hands to assault officers.

Only seconds later, the MPD police captain (Officer 4) took a position near where McKellop had just assaulted the two officers and tried to use the riot spray to regain control of the situation, per the complaint.

“During this confrontation, as MPD Officer 4 positions himself with the riotcontrol spray aimed toward MCKELLOP and the crowd, MCKELLOP picks up a flagpole from the ground and shoves it into the face of MPD Officer 4,” the complaint stated. “MCKELLOP then throws the flagpole, similar in fashion to throwing a spear, at MPD Officer 4. MCKELLOP’S actions caused a laceration to MPD Officer 4’s face.”

McKellop is facing charges of knowingly engaging in violence on Capitol Grounds, obstructing law enforcement, and forcible assault of a police officer using a deadly or dangerous weapon. The latter charge is technically punishable by up to 20 years in prison, but you should not expect a maximum penalty like this to be handed down.

Read the full charging document below: