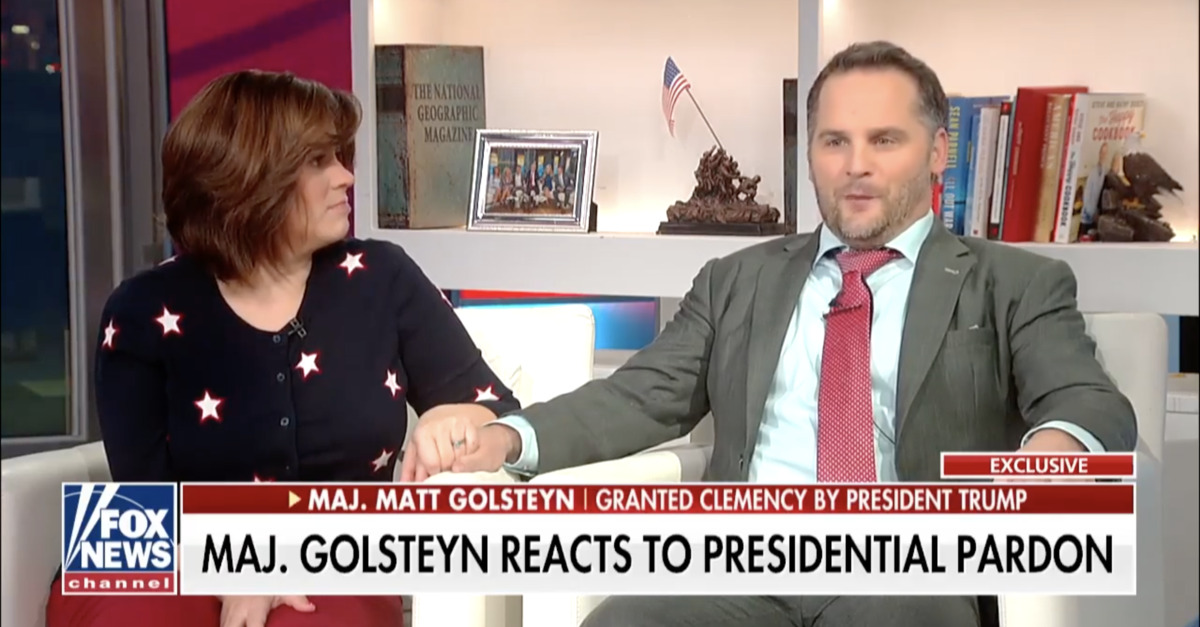 The U.S. Army has declined to restore medals and honors to Mathew L. Golsteyn, a major who was charged with murder and subsequently pardoned by former president Donald Trump in late 2019.

According to USA Today, the decision was made in June 2020, but the Army made a conscious decision not to announce their decision “in Trump’s final months as president.”

“Hopefully we will never again have agencies forced to conceal from a president basic actions out of fear of a volcanic overreaction from the Oval Office,” national security attorney Bradley P. Moss told Law&Crime. “It’s not a healthy way to run a country.”

Notably, the results of the decision were memorialized in November 2020, but Golsteyn did not learn of them until months after that.

The Army review board’s decision on Golsteyn, obtained by a researcher and shared with USA TODAY, shows that the panel denied all of his claims. The board cited a letter in his case from the Justice Department that Trump’s pardon did not wipe clean Golsteyn’s record. …

Lt. Col. Gabriel Ramirez, an Army spokesman, acknowledged the denial by the board, its highest level of review for personnel actions. But Ramirez said privacy laws prevent further comment.

Golsteyn had formally requested that the Army reinstate his Distinguished Service Cross and Special Forces tab that denoted his membership in the Green Berets. He was stripped of both after being accused of committing a war crime in Afghanistan by slaying a man suspected of being a bomb-maker for the Taliban. The man was released after questioning by occupation forces, but Golsteyn pursed him, killed him and then buried his body.

A planned court-martial was canceled after Trump pardoned Golsteyn and pardoned/gave special treatment to two other former soldiers, Clint Lorance and Eddie Gallagher, who were convicted of war crimes, sparking international outrage.

In December 2019, an Army review board declined to restore those honors and medals and the pardoned soldier appealed that ruling. Internally, the decision is now final—but Golstetyn could choose to pursue an appeal in the federal court system. He has not yet decided whether to do so, according to his attorney Phillip Stackhouse.

The review board, in its decision, noted that in 2011 Golsteyn had admitted to the killing that resulted in his being disciplined in the first place. The man killed was unarmed at the time.

The Army also took note of the nature of the presidential pardon and how it functions as leniency rather than a reassessment of basic guilt.

A “Presidential pardon is a sign of forgiveness and ‘does not indicate innocence,’” the review board wrote.

Golsteyn also asked for the Army to remove a letter of reprimand from his file. That request was denied as well.

The disgraced former major fumed about the timing.

“Clearly, we have seen military departments obey the direction of the Commander in Chief in other cases and, inexplicably, the Army defied the President,” Golsteyn said in a statement provided to USA Today. “It shouldn’t be a surprise the findings of the Army Board were released in November 2020 and not mailed to me for 2 more months, after President Trump left office, so my case could languish in the quagmire of Presidential transition.”

Golsteyn’s attorney hopes President Joe Biden intercedes on his client’s behalf but the 46th president has, so far at least, expressed no interest in the case.