Clint Lorance Says He Wants to Be a Lawyer | Law & Crime

Former Army Lt., Convicted for Ordering Murders and Pardoned by Trump, Says He Wants to Be a Lawyer 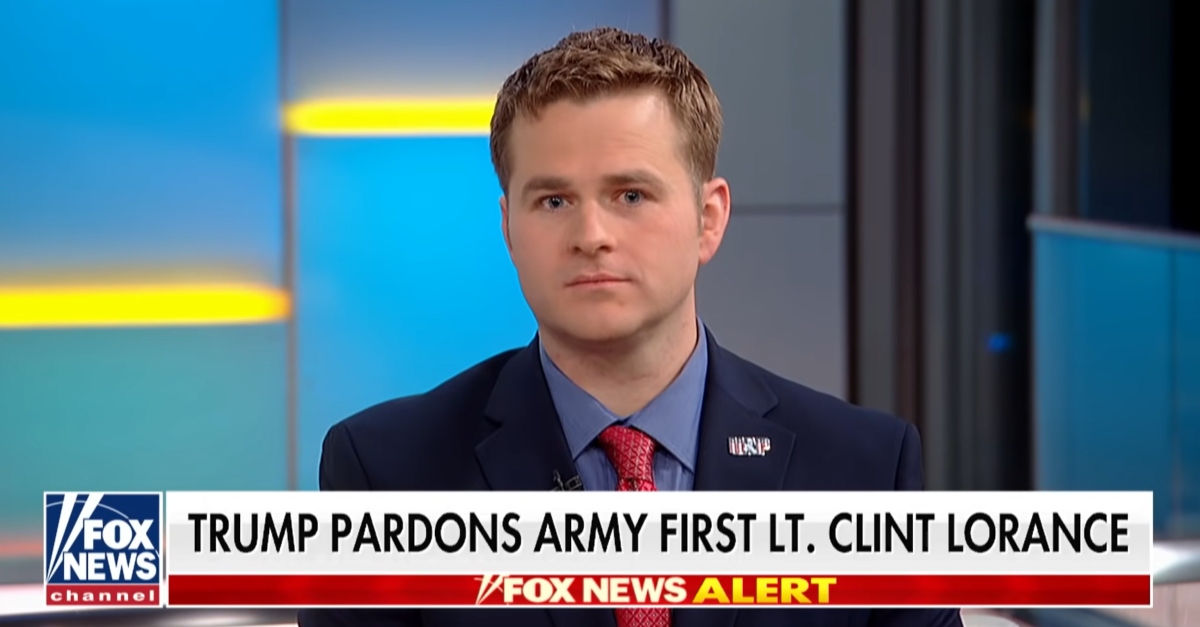 Clint Lorance, the former Army 1st Lieutenant pardoned by President Donald Trump in the murders of two Afghan men, says he wants to become a lawyer.

“If I had gone over there and made the decision that I was going to fight the war on my own terms and just do whatever I want, I should still be there — in jail — if that’s what I did,” he told Military.com in an interview on Sunday. “But that’s not what I did. Every single thing I did was for the good of this country and to try and do my job to the best of my ability. I was just so in over my head once they brought charges and everything.”

Lorance was convicted of second-degree murder in the 2012 incident. He had been on just his third day as leader of the 1st platoon of the 82nd Airborne Division, after four American soldiers (including his predecessor 1st Lt. Dominic Latino) were seriously injured, according to a Washington Post report. This informed the beginning of what his soldiers described as Lorance’s brief but brutal stint in leadership, which was marked by orders to intimidate if not attack Afghan villagers.

“We’re not going to lose any more men to injuries in this platoon,” Lorance said, according to testimony from then-Sgt. 1st Class Keith Ayres.

In the trial account, orders included threatening an Afghan farmer and his “3 or 4” year old son with getting shot after they asked to move razor wire blocking a field. In another order, Lorance told two soldiers to fire within just inches of unarmed locals.

“It’s funny watching those fuckers dance,” he said, according testimony from a soldier.

Witnesses said that, on his third day, Lorance ordered the shootings of three Afghan men who had been approaching Afghan National Army troops on a motorcycle. Soldier Todd Fitzgerald said he never fired his weapon because the men had stopped and “were just standing there.” Pvt. David Shilo followed the order, killing two of the men, and said that he believed this to be a lawful order. The third man escaped. Lorance ordered him to fire again and disable the bike after a boy approached the scene, but this time, Shilo refused.

Lorance was described as having an excited response to the shooting: “That was fucking awesome,” he said at headquarters, according to testimony.

Shilo was granted immunity in the case.

Lorance was initially sentenced to 20 years on charges including two counts of second-degree murder, but an Army general reduced it by one years after a clemency request from the defendant. Still, that left 19 years behind bars. Trump pardoned him after Fox News’s Sean Hannity’s advocacy. Hannity called Lorance’s conviction a “national disgrace.”

Members of the platoon voiced shock at the president’s decision.

“I feel like I’m in a nightmare,” former specialist Lucas Gray texted in the aftermath, according to the Post.

As for Lorance, he is studying at the Appalachian School of Law, though he said that the dean told him he has only a little chance of passing the bar with the conviction on his record.

“One of the things that frustrates me more than anything, and it continues to frustrate me to this day, is that people think I changed the rules [of engagement] arbitrarily, or that I changed the rules — period,” he said. “And, you know, that could not be further from the truth.”