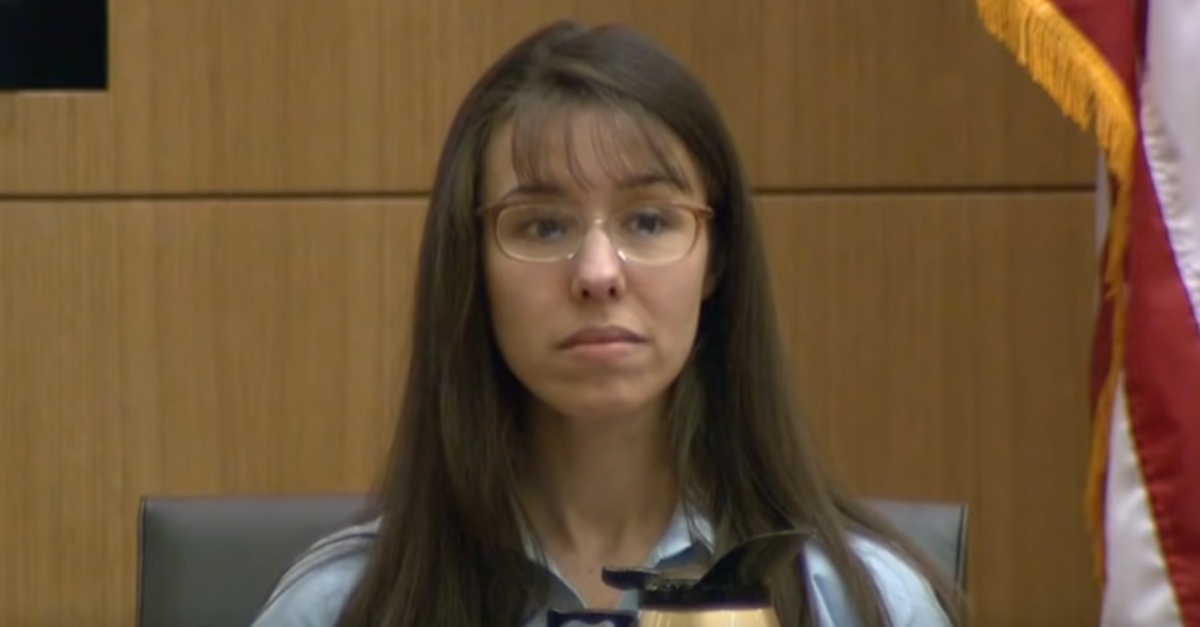 Convicted murderer Jodi Arias is not entitled to a new trial, the Arizona Court of Appeals determined on Tuesday.

Arias is currently serving a life sentence in prison, but she and her legal team attempted to take advantage of allegations of misconduct against the prosecutor in the case by seeking a new trial. In Oct. 2019, Terry Crist of the Arizona Attorney General’s Office acknowledged that “some instances” misconduct occurred, but Crist insisted the prosecutor’s behavior wasn’t as bad as the defense made it out to be. He said nothing happened that resulted in jury prejudice.

The appellate court ultimately agreed that the verdict was not the result of jury prejudice. Much of the Tuesday opinion focused on–and criticized–prosecutorial misconduct of ousted Maricopa County prosecutor Juan Martinez. The court also discussed the media’s role in the trial. Arias’s lawyers argued that coverage of the case and Martinez’s conduct resulted in prejudice against the defendant that was so egregious that Arias should get a new trial.

The court disagreed, mainly because Arias admitted she killed her 30-year-old ex-boyfriend Travis Alexander in 2008.

“Nonetheless, we conclude that Arias is not entitled to a new trial because there is no reasonable likelihood that the misconduct affected the jury’s verdict. That is, the overwhelming evidence of Arias’ guilt, as reflected through her own admissions and as clearly set forth within the record, would not have permitted any reasonable juror to acquit her of the charged offense,” the court wrote. “Because Arias admitted killing the victim, the State needed only show that she acted with premeditation rather than in self-defense. To prove her state of mind, the prosecutor presented substantial uncontroverted evidence that Arias planned the killing before she left California.”

The court also recounted that evidence point by point: 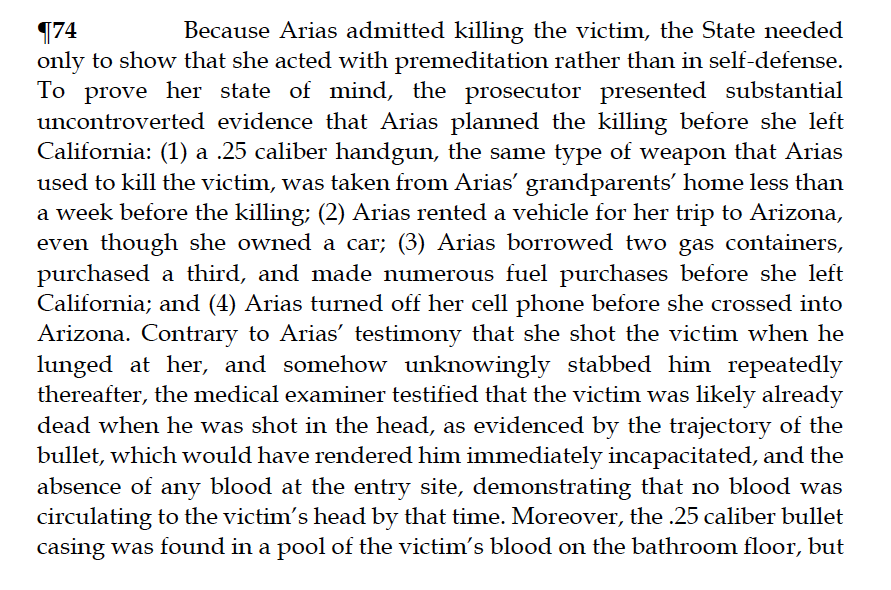 On media coverage, the court said that the press’s presence in the courtroom during trial “neither detracted from the solemnity of the proceedings nor created a setting wholly inappropriate for the administration of justice.”

The Arizona Court of Appeals had much more to say about the Martinez’s role at trial, saying he “regularly used aggressive questioning techniques and innuendo to intimidate and malign defense witnesses”–and in “violation of his ethical duties.”

The court took issue, for example, with Martinez’s cross-examination of Arias. 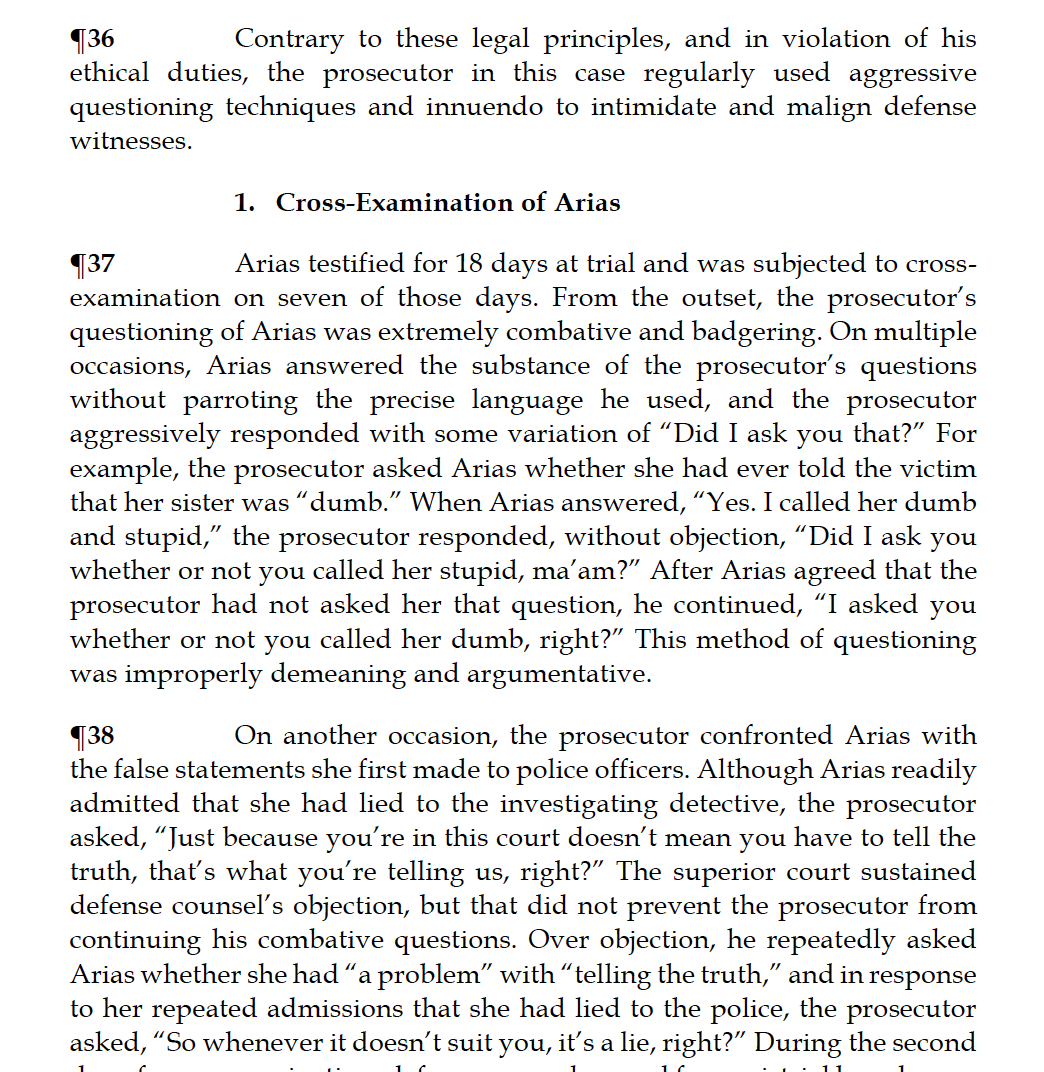 But Martinez’s questioning overall was considered “so improper” that the court was “compelled to conclude” Martinez “either knew or should have known of the impropriety.” 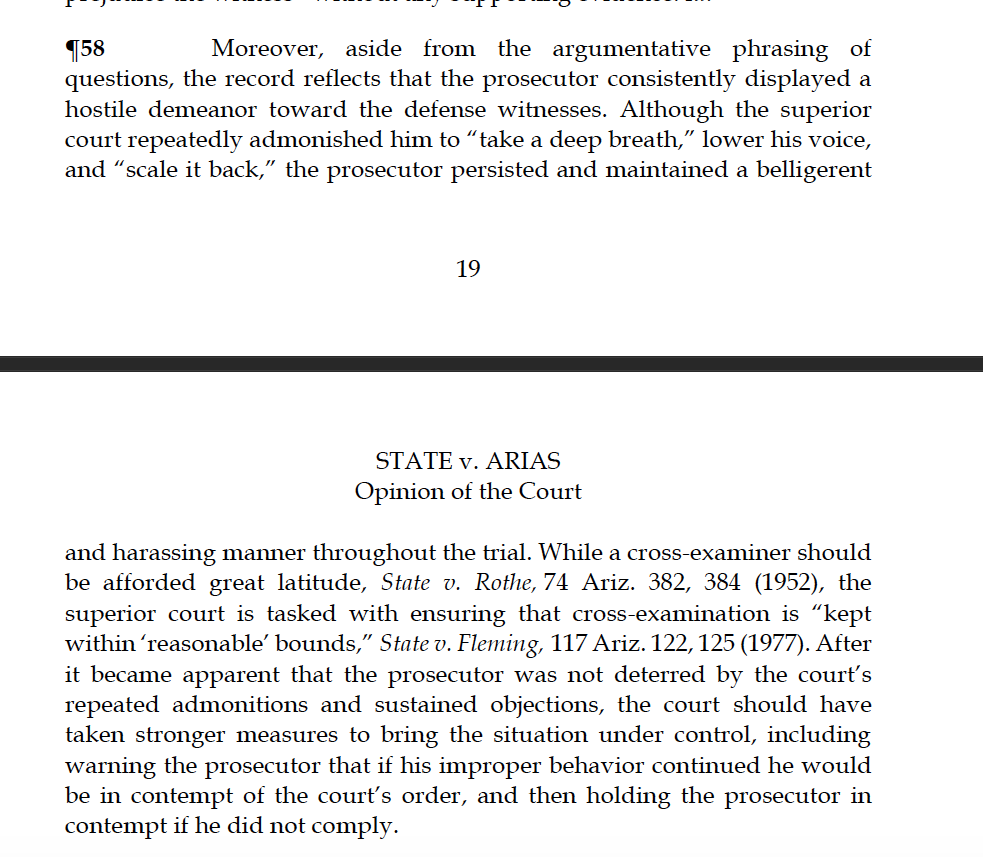 The Court of Appeals said that the trial court actually should have “taken stronger measures,” like warning Martinez that if he continued to ignore the court’s “repeated admonitions” he would be held in contempt.

“Prosecutorial misconduct undeniably permeated this case,” the court said. “Rather than a few isolated missteps, a pattern of intentional misconduct saturated the trial.”

Martinez was described as “hostile” and “aggressive.” 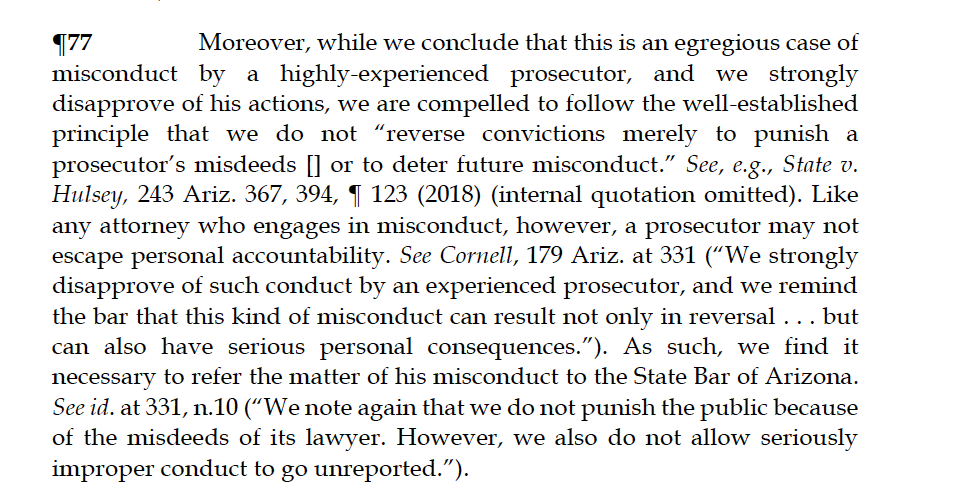 You can read the court’s opinion below.