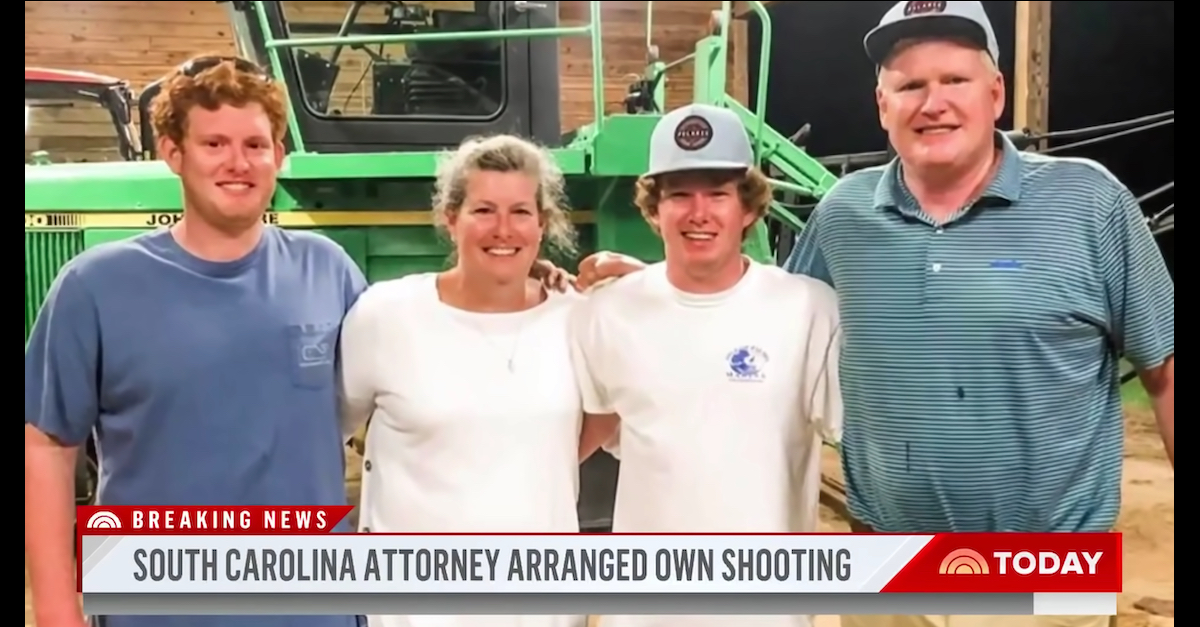 A spokesperson for accused criminal Alex Murdaugh on Thursday brushed aside—but did not directly dispute the accuracy of—a report by People Magazine that indicated murder victim Maggie Murdaugh had talked to a divorce attorney six weeks before her death.

Maggie and her son Paul Murdaugh were found dead on the family’s sprawling property on June 7.  Citing unnamed law enforcement sources, People reported that Maggie had “met with a divorce attorney in Charleston, S.C.”

The source also told the magazine that Maggie was “starting to look into” the source of the family’s wealth.

“She didn’t pay close attention to the family money or where it came from,” that source said — but she was allegedly becoming curious.

People continued the pile-on in a subsequent report.

“Behind the black ties and fancy dresses were miserable people,” a presumably different Murdaugh family associate told People in a separate article.

Another source claimed Maggie had stopped visiting Alex at his law firm.  That source also added that Maggie and Paul didn’t speak at the firm’s most recent Christmas party.

People further reported that Maggie also didn’t speak with Alex at a baseball game a few days before she died.

The source of that information claimed Maggie was “mad” and “aggravated,” the magazine said.  At one point, Alex allegedly brought peanuts to the family’s seats “and just tossed them” to Maggie with nary a word.

“It was weird,” the source told the magazine.  “Something was off.”

A spokesperson for Alex Murdaugh called the suggestion that Maggie may have been looking for a divorce while examining the family’s vast empire “totally inconsistent” with statements by family and friends.  The spokesperson provided the following statement after Law&Crime asked the legal scion’s lawyers to comment on the People Magazine reports — especially those which suggested Maggie was starting to ask questions about the family’s finances:

The most recent allegations by People Magazine regarding the state of Maggie and Alex Murdaugh’s marriage are totally inconsistent with what we have been told by friends and family members. Also, we have reviewed many years of text messages on Alex’s phone, and the conversations between Alex and Maggie portray a very loving relationship. It is our hope that the media will continue to focus on covering the investigation of the person or people responsible for the murder of Maggie and Paul and not reporting salacious stories with no credible sources connected to the Murdaugh family.

Paul Murdaugh was facing charges in a deadly boating crash when he was killed along with his mother.  Alex Murdaugh, Paul’s father and Maggie’s husband, was subsequently charged for allegedly convincing a former client to shoot him in the head so that his surviving son Buster Murdaugh could collect a $10 million life insurance policy.

The family’s trouble have captured national attention due in part to the family’s prominence in the South Carolina legal community.  A member of the Murdaugh family was an elected local prosecutor for eight decades.  Alex Murdaugh was a part-time prosecutor but was also engaged in private practice until his firm accused him of misappropriating funds.

Murdaugh’s lawyers told a judge during a court appearance Sept. 16 that he needed to be in rehab due to an opioid addiction.