Alan Dershowitz Slams Biden DOJ’s Handling of Matt Gaetz: ‘If They Leaked Grand Jury Material, That Was Clearly a Crime’ 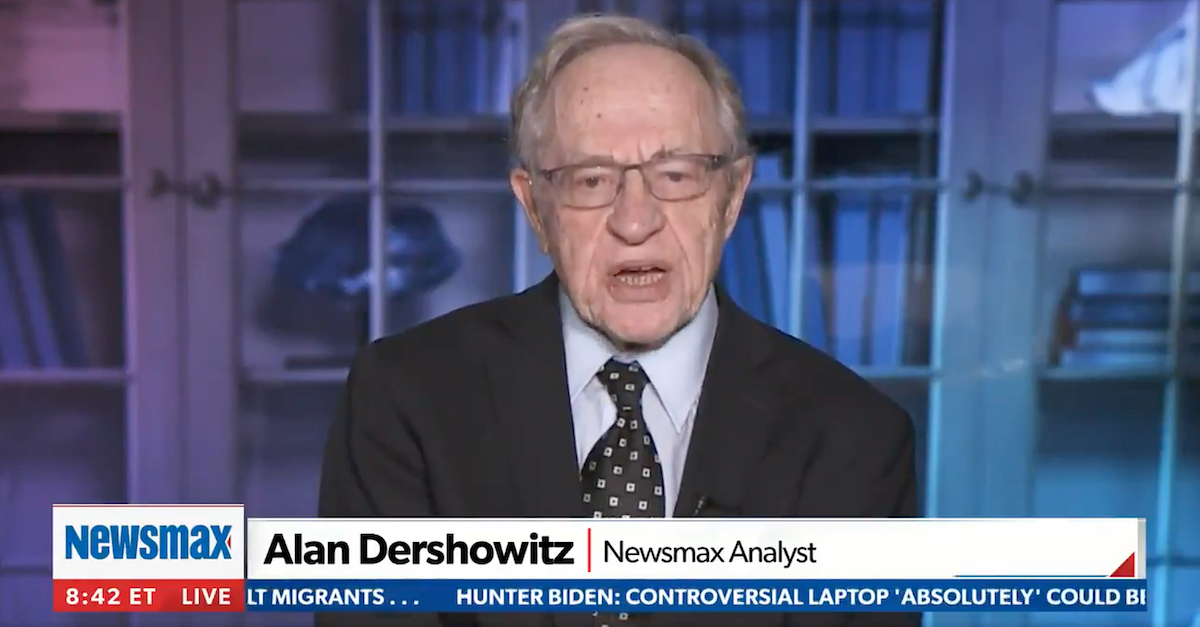 Harvard Law professor emeritus Alan Dershowitz is pointing fingers at the Justice Department’s handling of a probe which is reportedly questioning whether Rep. Matt Gaetz’s alleged relationship with a 17-year-old girl violated sex trafficking laws.  Gaetz has denied any wrongdoing.

In an appearance on the conservative television network Newsmax during a segment titled “Is Matt Gaetz Guilty,” Dershowitz claimed that the only thing known for sure is that the DOJ acted improperly by leaking material about its investigation to the media.

Pointing out that the Gaetz probe was initially opened by the Trump administration under former Attorney General Bill Barr, the famed attorney declared — without providing evidence — that the source or sources of information for multiple bombshell reports about Gaetz were directly connected to the DOJ.

“The investigation of the congressman began under the Trump administration, but what happened is, under the Biden administration the Justice Department leaked the material improperly,” Dershowitz said. “If they leaked the grand jury material, that was clearly a crime. But we know they leaked material. Now, he is a subject, not a target in the investigation, and there are Justice Department rules that you do not leak information about subjects, as subjects may just end up being witnesses.”

The initial New York Times report, which said investigators were looking into whether Gaetz had a sexual relationship with the 17-year-old and whether there was any exchange of money or things of material value, was sourced to “three people briefed on the matter.” According to the report, the probe originated out of Gaetz’s relationship with Joel Greenberg, a former Seminole County tax collector who was indicted last year on sex trafficking and other charges.

The three-term congressman said on Tuesday that he believed the “leak” to the Times was an attempt to thwart an elaborate extortion investigation Gaetz claimed to be helping federal investigators build against his accusers.  He also claimed a former DOJ attorney that had been part of a plot to shake his family down for money.  That former attorney, David McGee, said Gaetz had it all wrong.  The law firm where McGee currently works called Gaetz’s accusation against McGee “both false and defamatory.”

Gaetz himself was the source of the assertion that he was only a subject and not a target of any investigation, telling the Times that was what the DOJ told his lawyers when they asked about the probe.

Dershowitz spent the remainder of the segment focused on the fact that the investigation — which Gaetz spoke about in great detail in the days following the Times story — had been made known to the public, calling for a separate inquiry to find the source of the alleged leak.

Section 156 of the U.S. Department of Justice’s Criminal Resource Manual outlines the many issues which surround grand jury leaks.  Under the Federal Rules of Criminal Procedure, grand jurors themselves, court interpreters, court reporters (stenographers), the “operator of a recording device,” “a person who transcribes recorded testimony,” and “an attorney for the government” are banned from disclosing grand jury material. State and local officials and other government attorneys are also generally banned from releasing federal grand jury material.

The Criminal Resource Manual notes that “other criminal statutes” and a federal district judge’s inherent contempt powers can also be used to punish leaks. Possible charges could include obstruction of justice under 18 U.S.C. § 1503, theft of government property under 18 U.S.C. § 641.

Watch the full segment below.