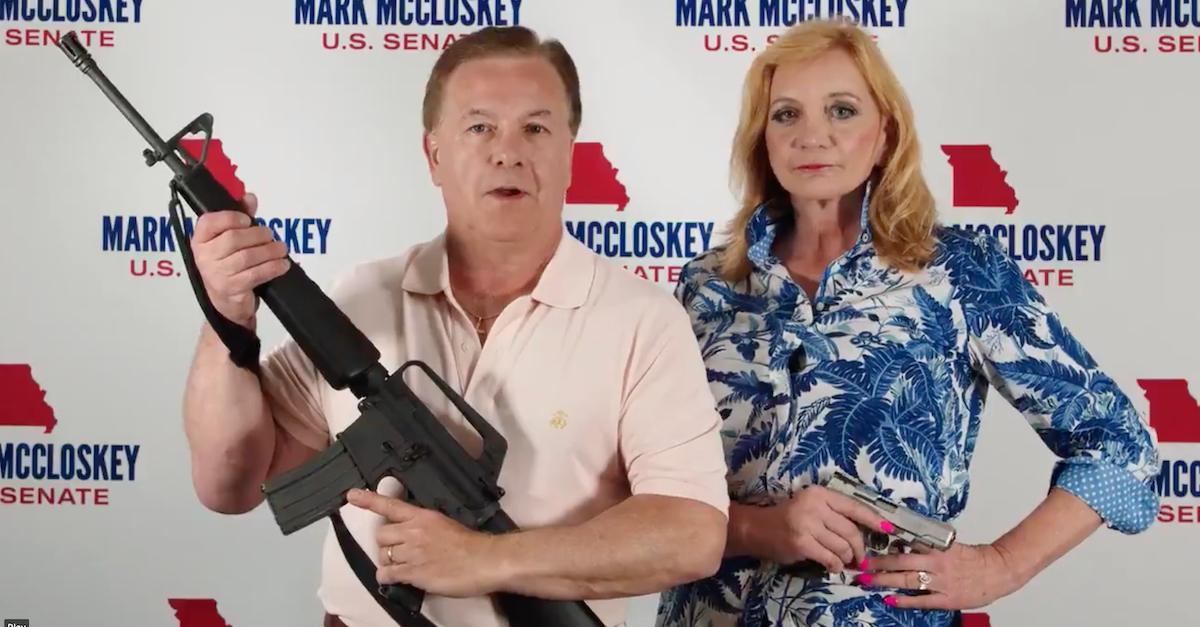 Hours after husband and wife Mark McCloskey and Patricia McCloskey pleaded guilty to one misdemeanor charge each for brandishing guns while protesters entered their gated St. Louis community, the couple appeared on Twitter — again brandishing weapons.

In a series of what appear to be both pre-conviction and post-conviction tweets, Mark McCloskey, who is running for U.S. Senate, bragged that he would “do the same thing again” if an “angry mob” again “threatened” his life.

“My name is Mark McCloskey,” a campaign video disseminated at 4:05 p.m. begins. “A year ago, an angry mob crashed through my gate and threatened my life, my family, and my home. And I stood on the front porch with my AR-15 and backed the mob down.”

Well, recently, the prosecutor has dropped the charges against me, except for a claim that I purposefully placed other people in imminent fear of physical harm. And by God I did.  And any time they come to threaten me, I’ll do the same thing again, and again, and again to protect myself, my home, my family, and our rights as human beings.  A vote for McCloskey is a vote for standing your ground.  Vote for me, and we’ll never back down.

The video appeared on Twitter with a similar verbal message.

A year ago, the mob came to my door to attack my family— I backed them down

The mob came for me, the media attacked me & prosecutors tried to punish me for defending my family

They dropped all charges, except for a claim I instilled “imminent fear” in the mob

I’d do it again. pic.twitter.com/ECPsSwa2Iw

The video puts a positive spin — from McCloskey’s perspective — on the commonplace legal practice of dropping more serious charges in return for a guilty plea on lesser charges.

The actual statute McCloskey pleaded guilty to committing says he placed at least one other person “in apprehension of immediate physical injury.”  That’s the precise verbiage of the Class C misdemeanor section of the Fourth Degree Assault statute which applies to McCloskey’s case.

“Any time the mob comes and threatens me, I’ll do the same thing again to protect my family. I will never back down to the liberal mob in the Senate, and I will always stand strong for Missouri.” pic.twitter.com/X8RyEm7Ff3

McCloskey’s other tweets touted his connection to right-wing politics.

“When the mob attacked my home, the media claimed the gate was open and that it wasn’t torn it down to attack my family,” he said. “A media that constantly deceives Americans and glorifies the mob cannot be trusted.”

The tweet showed several photos of a damaged gate which led to the McCloskey’s private community.

When the mob attacked my home, the media claimed the gate was open and that it wasn’t torn it down to attack my family. Well, look here.

A media that constantly deceives Americans and glorifies the mob cannot be trusted. pic.twitter.com/TAyLeYijEU

The status of the gate has been hotly debated. Citing legal records, the St. Louis Post-Dispatch has long reported that the McCloskeys knew the gate was in a state of disrepair long before protesters entered their neighborhood. The newspaper has also long displayed video of the initial wave of protesters proceeding through what appears to be an intact and unlocked gate. Citing video from the protest, local NBC affiliate KSDK-TV has also long reported that the gate was intact when the initial protesters passed through it.

The widely cited video of the intact gate is here: