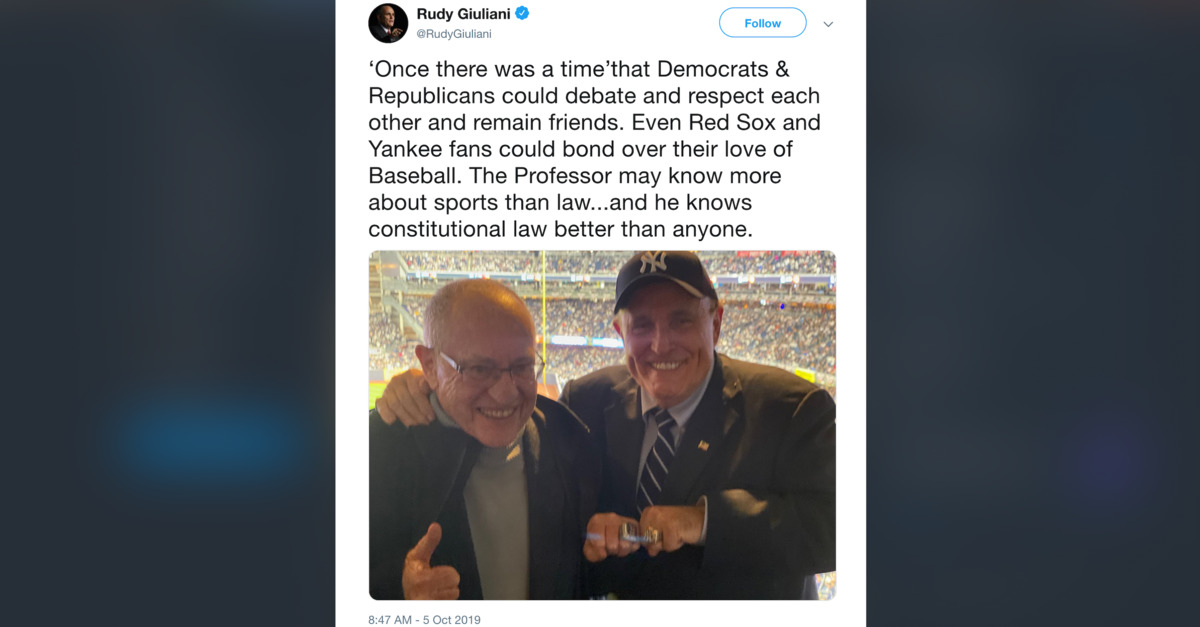 Many on the internet groaned after President Donald Trump‘s personal lawyer and former New York City mayor Rudy Giuliani posted an image of himself with Harvard Law professor emeritus Alan Dershowitz at a Friday evening Major League Baseball (MLB) playoff game between the New York Yankees and the Minnesota Twins. Could the two have been chatting about a certain impeachment inquiry or could Dershowitz have been imparting some advice? Dershowitz says that was not the case: It was just a politics-free evening at Yankee Stadium.

Law&Crime asked Dershowitz whether he discussed strategy with Giuliani regarding the ongoing impeachment situation and whether he was conferring with–or otherwise advising–President Trump, Giuliani or the White House in any way. Dershowitz offered up the following response:

I am not conferring. I love baseball, as does Rudy, who I’ve known for more than 40 years. We compared rings. My Red Sox and his Yankees World Series rings. He told me how much he enjoyed a politics free evening with a fan who knows as much about baseball as he does. I asked him a trivial pursuit question: how can there be 4 outs in an inning? He loved the answer.

The Dershowitz-Giuliani outing was first noted by Jonathan Lemire, a White House reporter for the Associated Press. Giuliani’s Friday night and Saturday morning Twitter posts confirmed the legal guru rendezvous. And though Friday’s game had nothing to do with the historic Red Sox-Yankees rivalry, Giuliani framed the Dershowitz meeting as something akin to mutual respect between historic rivals:

‘Once there was a time’that Democrats & Republicans could debate and respect each other and remain friends. Even Red Sox and Yankee fans could bond over their love of Baseball. The Professor may know more about sports than law…and he knows constitutional law better than anyone. pic.twitter.com/ivwqD9UMqD

Aside from perception that Dershowitz and Giuliani might have been discussing current events under the cover of a baseball outing, a cursory Twitter query showed how the internet responded to the news of the meeting and photograph: Many tweets skewered the meeting of minds as either somehow improper or made reference to Dershowitz’s prior legal representation of accused child sex-trafficker and convicted sex offender Jeffrey Epstein.

Dershowitz represented Epstein during his initial run-in with law enforcement in Florida in 2008, when the financier was handed a lenient and controversial 13-month sentence by President Donald Trump‘s eventual-and-former Labor Secretary, then-U.S. Attorney Alexander Acosta.

Dershowitz has, of course, been accused of being a participant in Epstein’s alleged sex-trafficking scheme–a charge he has vehemently denied.

In a recent email to Law&Crime, Dershowitz denied the veracity of Virginia Roberts Giuffre’s claims, and insisted that the two have never even met.

“Our position is that I’ve been truthfully calling Giuffre a liar regularly since she falsely accused me in 2014. I will continue to tell the truth whenever she falsely accuses me,” Dershowitz said. “If she believed I defamed her in 2014, 2015, 2016 and 2017, she could have sued me then. I will defend my First Amendment right to truthfully deny a false charge. To paraphrase Adlai Stevenson: if my false accuser stops lying about me, I will stop telling the truth about her.”

In the days after Epstein’s death, Dershowitz also told Law&Crime he believed that Epstein, indeed, died by suicide. He also speculated as to why.

“[M]y own view is that he had made a decision that he would probably spend the rest of his life in prison,” Dershowitz said.  “He couldn’t bear that reality, and he decided the best way out for him was to take his own life.”