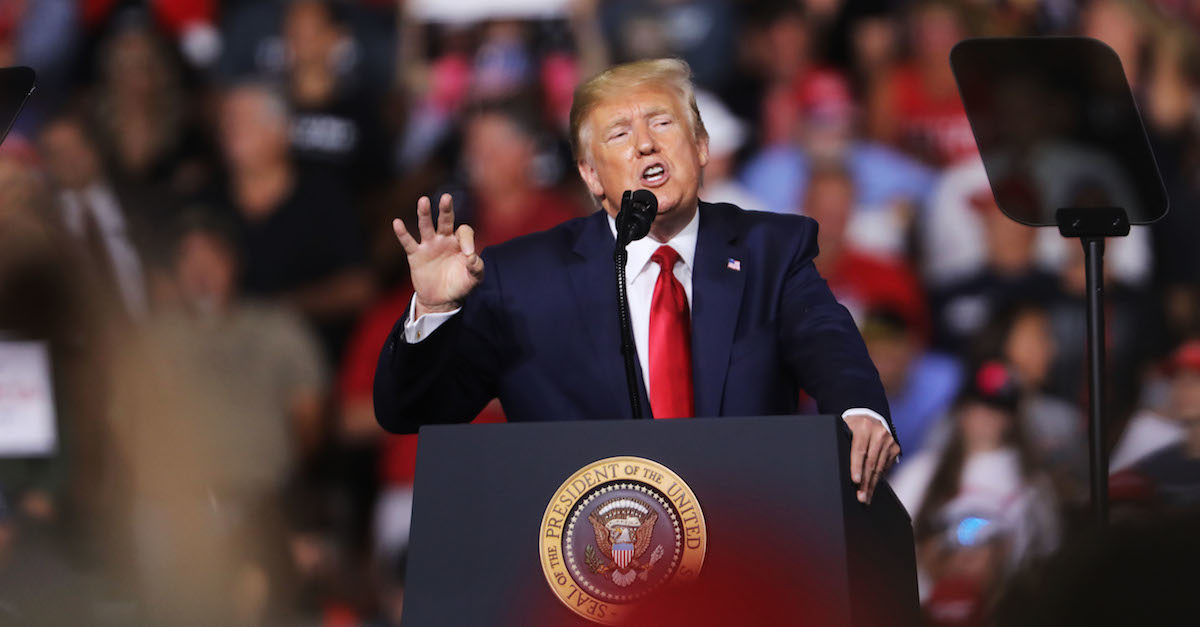 Speaking to supporters at a campaign rally in Monroe, Louisiana on Wednesday night, President Donald Trump quoted extensively from a Fox News article about a series of past tweets from one of the whistleblower’s attorneys, which Trump held up as proof that his impeachment was part of a multi-year conspiracy to throw him out of office. The attorney, Mark Zaid, explained the context of those tweets to Law&Crime on Wednesday night. In the hours after the president’s rally, however, Zaid and his associates (even one who isn’t involved in the whistleblower case) saw a significant uptick in death threats and hate mail.

Trump began his rally-speak by saying “I just got off the plane and they hand me – look at this character – they just hand me this story,” Trump said, reaching into his jacket pocket and pulling out a recently printed copy of the Fox News article with Zaid’s photo atop the page. Trump read the article aloud, beginning with Zaid’s 2017 “coup has started” tweet. Trump told his supporters “it’s all a hoax” and “it’s a scam,” before specifically singling out Zaid and calling him “a sleazeball.”

Law&Crime reached out to Zaid for comment about the tweet Trump was talking about, and this is what he said:

In the time since that tweet was posted, which was referring to lawyers serving as the force of good to prevent this president from doing harm to our democracy, I’ve probably represented more Republicans, including White House officials, than Democrats. This is nothing more than the continuing partisan deflection to desperately avoid discussing the substance of my client’s whistleblower complaint.

Bradley Moss, who is a partner at Zaid’s firm but is not a member of the whistleblower’s legal team, said he awoke to numerous death threats after the president’s rally.

“[Donald Trump], thank you so much for the specific commentary about my firm last night. I woke up to a ton of hate mail and death threats,” Moss tweeted Thursday morning. “And I’m not even on this case.”

Zaid has already had to report death threats to the FBI after being vilified by Trump and right-wing media, according to a Thursday report from Yahoo News. The FBI determined an Oct. 2 message with the subject line “a bullet in your head” wasn’t a credible threat, but it hasn’t been the only threat.

“On Wednesday morning, a person using the encrypted email service ProtonMail told Zaid to ‘DIE you piece of FILTH,’ and another emailed the legal team repeatedly, in one message saying that Russian President Vladimir Putin ‘would have already shot scum like this,’ referring to the whistleblower,” the report said.

The threats also extend to another one of the whistleblower’s attorneys, Andrew Bakaj. Bakaj reportedly received an email threatening that “someone would ‘come up to [him] on the street’ when he ‘least expects it,’ hinting at violence.”

The president’s son, Eric Trump, late Wednesday added fuel to the fire against Zaid and his associates, tweeting that they should be imprisoned.

“Oops! You mean to tell me this was orchestrated?!” Eric Trump tweeted along with a link to the Fox News article. “People should go to prison for this kind of conduct…”.

Donald Trump Jr. on Wednesday tweeted out an article which may or may not have contained the name of the intelligence community whistleblower, leading whistleblower advocates to suggest that he was the one who should be locked up.

Trump Jr. responded to these and other such suggestions on Thursday.

The hosts of The View are lying about the whistleblower statute.

Here's the statute that proves it's only a crime for the IG to release the name of the whistleblower. Totally legitimate & legal for members of the media & private citizens to name him.https://t.co/M2DefCURRF