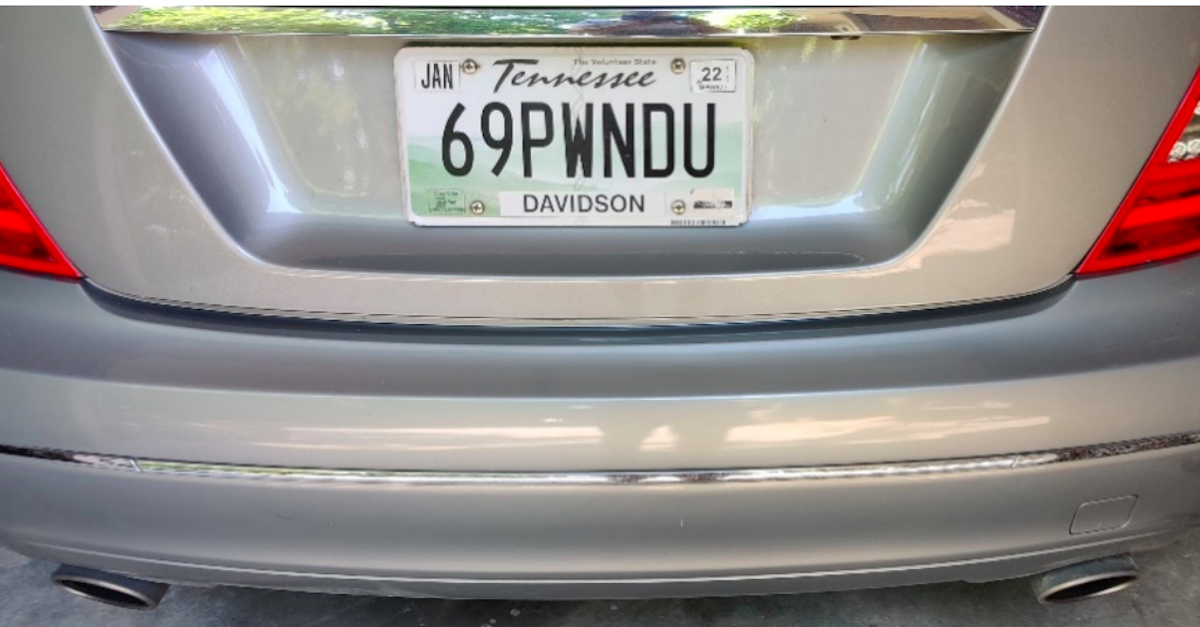 A Tennessee woman is suing two of the state’s top political officials for allegedly violating her First and Fourteenth Amendment rights after she was told that she had to give up her vanity license plate—which reads 69PWNDU—or risk being sent to jail.

The lawsuit, filed in the Chancery Court for Tennessee’s Twentieth Judicial District, says that Plaintiff Leah Gilliam originally purchased the vanity plate to celebrate her interests as “an astronomy buff and a gamer.” According to the complaint, the “69” is a reference to the year of the moon landing, and “PWNDU,” or “PWND YOU,” is a widely used slang phrase in the gaming community meaning “to totally defeat or dominate.”

Gilliam has had the plate for more than a decade, but the Tennessee Department of Revenue in May sent her a letter stating that her plate had been “deemed offensive” and was being revoked by the state. The department’s purported authority for its action is derived from a statute that says the commissioner of the Revenue Department “shall refuse to issue any combination of letters, numbers or positions that may carry connotations offensive to good taste and decency.”

But Gilliam contends that the department’s demand—which exposes her to the immediate threat of criminal liability and up to 30 days in jail—amounts to “prior restraint against her constitutionally protected speech.”

The suit, which names the commissioner of the Department of Revenue and the state attorney general as defendants, further alleges that forcing Gilliam to give up her First Amendment right violates the Fourteenth Amendment guarantee of equal protection under the law.

Gilliam is seeking temporary and permanent injunctions to prevent the Revenue Department from revoking her license plate and from enforcing the aforementioned statutes as well as $1 for every day that she is prohibited from displaying the plate.

“The First Amendment forbids the government from discriminating against citizens based on the viewpoint they express,” said Gilliam’s attorney Daniel A. Horwitz in a statement.“Ms. Gilliam’s harmless vanity plate is transparently protected by the First Amendment, and the only illegality involved is the Tennessee Department of Revenue’s decision to violate her First Amendment rights.”

A similar lawsuit was recently filed in Mississippi.  Law&Crime’s report on that litigation, and a dive into the relevant case law, is here.