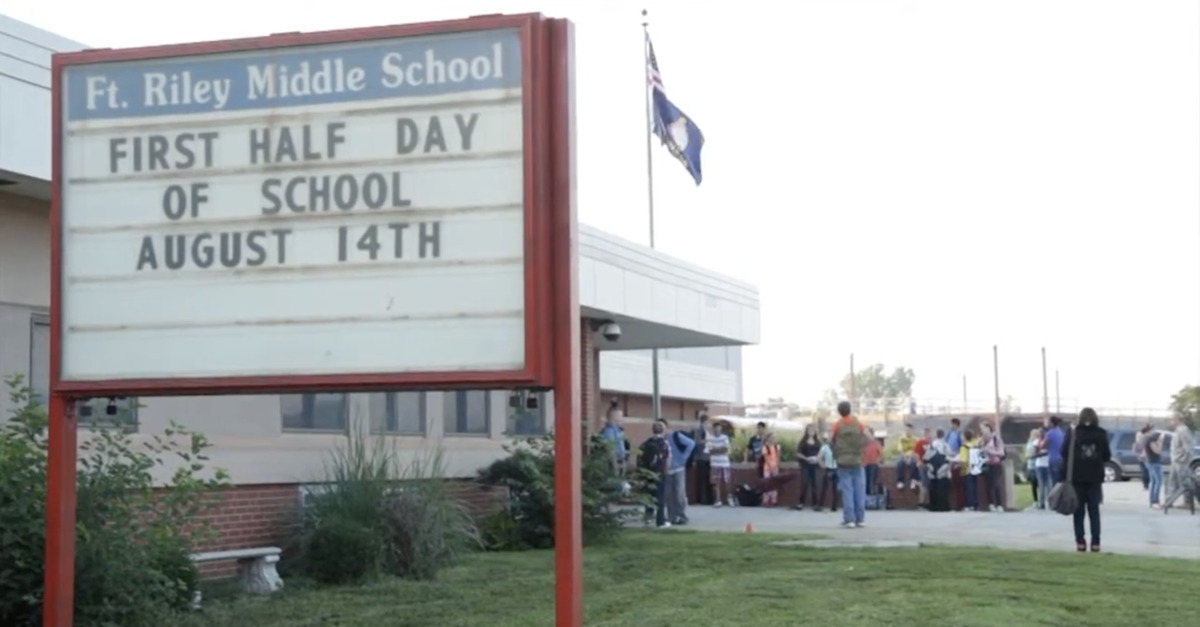 A Kansas middle school teacher won a substantial payout after settling with the school district where she works over her punishment for refusing to refer to a student by his preferred pronouns.

Pamela Ricard, a retired math teacher at Fort Riley Middle School, settled with Geary County Schools for $95,000, according to a statement released by the public interest law firm that represents her.

During the spring semester of 2021, the school began asking teachers to refer to students using their “preferred name” instead of their legal or enrolled names. Sometime during that semester, Ricard referred to a student assigned female at birth using the student’s legal and enrolled last name. Before that, a guidance counselor told the math teacher that the student preferred a different name. After that, another student told Ricard the student used he/him pronouns, according to the lawsuit filed in U.S. District Court in Kansas earlier this year.

In April 2021, the teacher was suspended for three days and issued a “formal written reprimand for addressing a biologically female student by the student’s legal and enrolled last name,” the complaint says.

Ricard sued the school district on various First Amendment theories, including viewpoint discrimination, retaliation, compelled speech, and a free exercise of religion claim, as well as various other constitutional and statutory violations, and common law claims.

The lawsuit poked holes at the reason for the teacher’s reprimand.

“At no point has the student in question directly asked Ms. Ricard to call the student by an alternate preferred first name, last name, or pronouns different from the information contained in the student’s enrollment records,” the filing says. Neither the District nor the school had a formal policy regarding student preferred name and pronoun use at the time Ms. Ricard was suspended and reprimanded.”

Rather, the lawsuit notes, “Ricard was suspended and reprimanded under generic school district policies related to” bullying by staff, diversity and inclusion efforts, and prohibitions against “harassment.”

After the teacher returned, however, the school instituted a series of formalized diversity rules relating, relevant here, to transgender students, including a prohibition against teachers revealing a students’ transition to another gender unless expressly authorized by the student. Ricard moved for a religious exemption and was summarily denied by various authorities in the district.

Ms. Ricard is a Christian and holds sincere religious beliefs consistent with the traditional Christian and biblical understanding of the human person and biological sex. Ms. Ricard believes that God created human beings as either male or female, that this sex is fixed in each person from the moment of conception, and that it cannot be changed, regardless of an individual person’s feelings, desires, or preferences. Any policy that requires Ms. Ricard to refer to a student by a gendered, non-binary, or plural pronoun (e.g., he/him, she/her, they/them, zhe/zher, etc.) or salutation (Mr., Miss, Ms.) or other gendered language that is different from the student’s biological sex actively violates Ms. Ricard’s religious beliefs.

In May of this year, U.S. District Judge Holly L. Teeter, a Donald Trump appointee, ruled that Ricard was likely to prevail on her free exercise claim over the “Communication with Parent Policy,” and won a preliminary injunction against the policy being enforced.

Following the court’s ruling, the school board voted to revoke the parental communications policy regarding gender identity.

In addition to the monetary award, officials at the school where Ricard taught for over 15 years agreed to issue a statement that says she was a teacher in good standing at the time of her retirement earlier this year.

After that agreement was reached, attorneys with the conservative Christian legal group Alliance for Defending Freedom moved to have their client’s lawsuit dismissed.

“We’re pleased to settle this case favorably on behalf of Pam, and we hope that it will encourage school districts across the country to support the constitutionally protected freedom of teachers to teach and communicate honestly with both children and parents,” ADF Senior Counsel Tyson Langhofer, director of the ADF Center for Academic Freedom, said in the statement announcing the settlement.