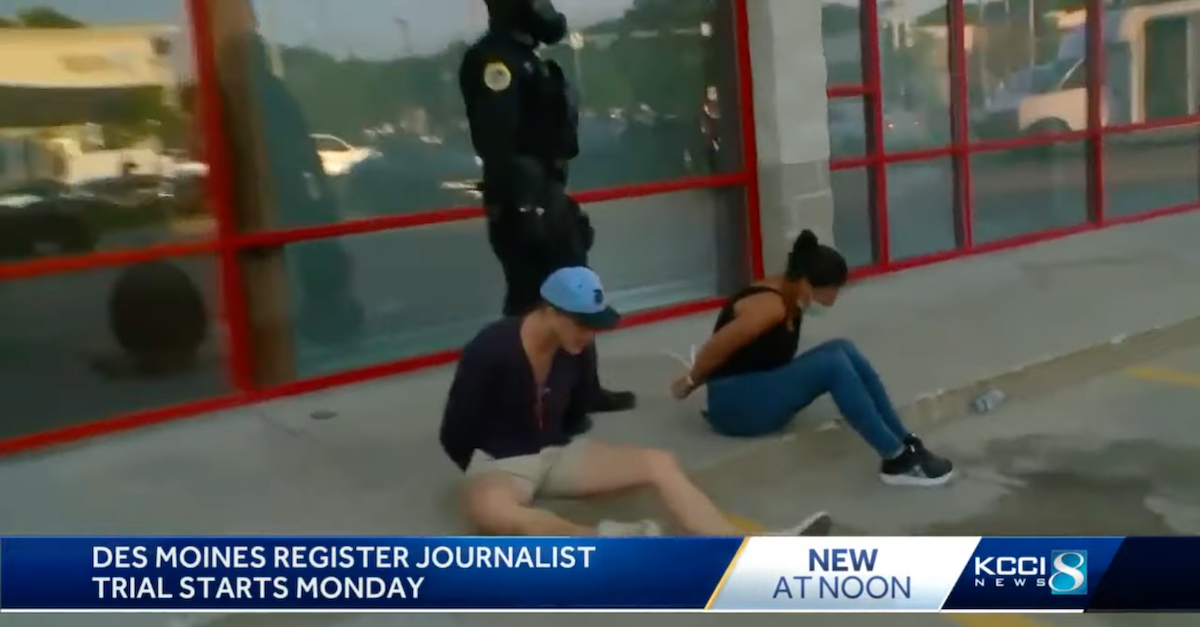 A Des Moines, Iowa jury on Wednesday acquitted a newspaper reporter charged criminally with two misdemeanors — failure to disperse and interfering with official acts — after she was arrested while covering a George Floyd protest during the summer of 2020.

The six-member jury heard testimony for three days and deliberated less than two hours before issuing not guilty verdicts in the cases against Andrea Sahouri. Sahouri was on assignment for the Des Moines Register when she was pepper sprayed and arrested for allegedly ignoring police orders to disperse and for allegedly pulling away from an officer who tried to arrest her.

The Associated Press noted that the commands to disperse “were barely audible” on the police video of the events. Additionally, the commands occurred “nearly 90 minutes before” Sahouri and her boyfriend Spenser Robnett were ultimately arrested.

The case also revealed that Luke Wilson, the officer who arrested Sahouri, violated department policy by failing to record the arrests of the reporter and her then-boyfriend on his on his department-issued body camera.

Testimony revealed that Sahouri identified herself as a journalist; still, the police ignored her pleas.

Robnett said he went with Sahouri to the protest to help protect her. Robnett was also acquitted.

Polk County, Iowa Prosecutor Bradley Kinkade asked the jury to ignore Sahouri’s profession and tried to use her coverage of the protest as evidence she remained in the wrong place at the wrong time. Kinkade also told the jury “it didn’t matter” if Sahouri and her ex “actually heard or understood the orders” to disperse, according to the AP’s coverage of the case.

The jury disagreed with Kinkade’s assessment of the matter.

Nicholas Klinefeldt, Sahouri’s defense attorney, said neither Sahouri nor her boyfriend heard the police call to disperse. He said Sahouri was attempting to report the news from a position of safety and was running away from a violent area when the police tear gassed her.

“Sahouri testified that she put her hands up and identified herself as a reporter,” the AP said, “but was nonetheless pepper-sprayed and handcuffed with zip ties.”

Klinefeldt argued that the police officer’s version of what occurred was not credible given Sahouri’s testimony and the lack of body camera video of the initial moments of her arrest.

The Register‘s executive editor and another Register reporter who was covering the protest also testified.

Polk County Attorney John Sarcone pressed the case despite widespread criticism from journalists, professors, and even from Amnesty International given the First Amendment implications which arose. The constitutional freedoms of speech and of the free press carry with them a legally recognized implied right to gather the news before disseminating it. The arrest of the reporter shut down — with a full stop — live coverage of an event which carried serious implications for the community’s safety and well being.

Des Moines Register Executive Editor Carol Hunter said she was “grateful that the jury saw this case as the unjust prosecution of a reporter who was doing her job.”

“Newsgathering is a fundamental part of press freedom,” Hunter continued.  “Reporters need to be at protests as the public’s eyes and ears, to conduct interviews, take photos and witness for themselves the actions of protesters and law enforcement. If reporters are arrested and hauled away from protests, that denies people the right to know what’s going on in their community.”

Maribel Perez Wadsworth, a Gannett corporate executive in charge of news, said she was “grateful that justice was done.”

“Andrea was fully exonerated,” Wadsworth continued. “But it should never have come to this. It was clear Andrea was at that protest as a working journalist. It was clear that police were allowing other journalists to do exactly what Andrea was doing that day — reporting from a breaking news scene. Andrea was assaulted, arrested, charged and ultimately tried for doing her job. Today’s victory was as much a victory for the First Amendment as it was for Andrea.”

Grateful justice was done, and @andreamsahouri was fully exonerated. But it should never have come to this. She was assaulted, arrested, charged and tried for doing her job. Today’s victory is as much a victory for the 1st Amendment as it is for Andrea. #PressFreedom https://t.co/Ukyr3N5a8w

“I’d like to thank my family and friends, my Des Moines Register and Gannett colleagues and people around Des Moines, nationally and globally who have supported me for nearly a year after I was unjustly assaulted and arrested,” she said. “I’m thankful to the jury for doing the right thing. Their decision upholds freedom of the press and justice in our democracy.”

Watch CNN’s coverage of the arrest below: