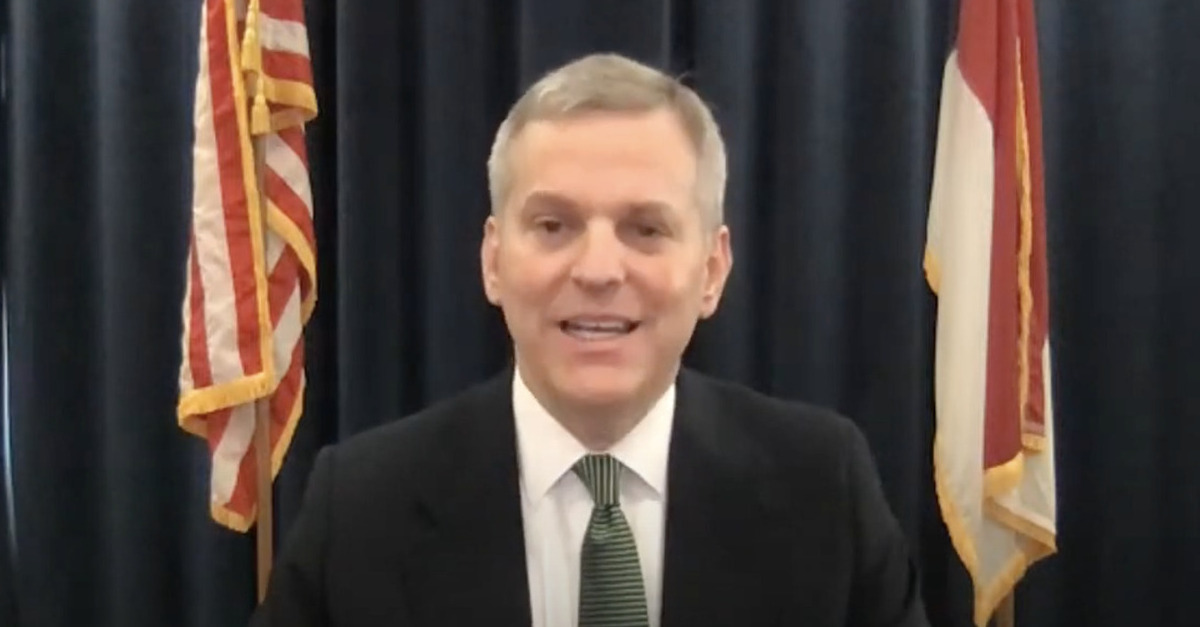 Since 2017, Stein has been the Tar Heel State’s top prosecutor, and he sought to preserve his post with an attack ad titled Survivor, featuring a woman — identified at the time only as “Juliette” — praising the incumbent for reducing backlogs on rape kits. Juliette also attacked Stein’s then-Republican challenger Jim O’Neill for allegedly leaving 1,500 kits untested. O’Neill, who lost the race, called the accusation false.

Though the ad first ran in 2020, Stein said, O’Neill pursued an investigation under a 1931 criminal libel law. The AG sued to block the statute earlier this month, describing it as “archaic and never-before used.” It hangs the threat of jail time over a political candidate if a prosecutor alleges any campaign communication to be untrue.

N.C. Gen. Stat. § 163-274(a)(9) prohibits any person from publishing or circulating “derogatory reports with reference to any candidate in any primary or election, knowing such report to be false or in reckless disregard of its truth or falsity, when such report is calculated or intended to affect the chances of such candidate for nomination or election.” Violation of the statute is a Class 2 misdemeanor punishable by fines and up to 60 days imprisonment.

Eagles’ ruling, though presently only temporary, means that Wake County District Attorney Lorrin Freeman (D) may not prosecute anyone associated with a 2020 commercial.

Stein, for his part, claims that his ad was truthful and responded only to his rival’s false allegations. The O’Neill campaign accused Stein of standing, “on the sidelines for almost his entire term while more than 15,000 untested rape kits have sat on the shelves of the lab that Stein is responsible for, collecting dust.”

In court documents, the Stein campaign said it believed O’Neill’s accusation to be false, as reducing the backlog of rape kits “had in fact been a priority since Stein’s first days in office,” and had been a goal in which “measurable progress had been achieved.”

In response to O’Neill’s messaging, Stein’s campaign ran some communications of its own in the form of an ad that said it was O’Neill had been indifferent to a large backlog of untested rape kits in his own jurisdiction of Forsyth County. Stein said the ad was fact-checked and found truthful by an outside research firm before airing.

The Wake County District Attorney’s Office and the State Bureau of Investigation (SBI) and the State Board of Elections began to investigate the matter. According to court documents, “SBI agents conducted an exhaustive series of interviews into virtually every aspect of [Stein’s] political advertisement’s creation, production, execution, and, most importantly, content.”

As part of the official investigation, Juliette Grimmett, the North Carolina survivor of sexual assault who appeared in Stein’s political ad, was subjected to multiple “invasive” interviews. Stein’s campaign sued multiple North Carolina officials, arguing that the campaign communications law is unconstitutional in that it violates the First Amendment.

Judge Eagles agreed at this preliminary stage, and ruled that without an order restricting enforcement of the statute, the plaintiffs and others will be exposed “to potential criminal prosecution for violating an overbroad criminal libel statute.” Eagles also ordered the parties to return to court on Aug. 4, 2022, at which point the judge will rule as to whether the temporary order should be continued on a more permanent basis.

The North Carolina Board of Elections declined to comment. Stein’s office did not immediately respond to Law&Crime’s email requesting comment.