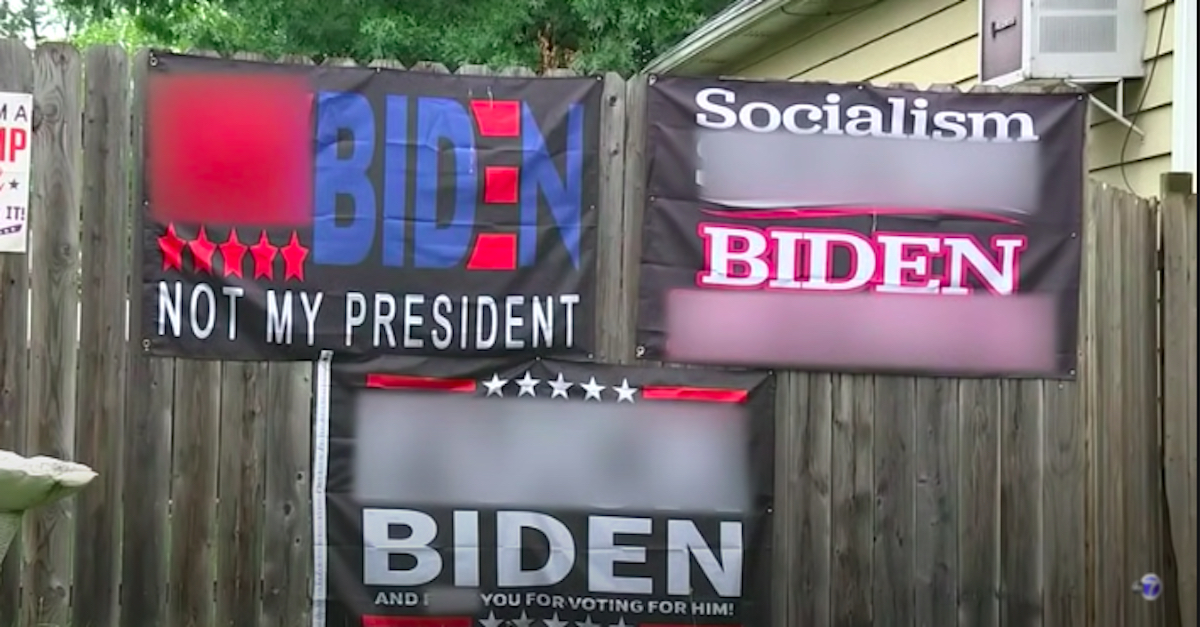 The New Jersey chapter of the American Civil Liberties Union (ACLU) has signed on to represent a pair of suburban women after a local judge ordered them to remove anti-Joe Biden signs from their front yard — several of which included the word “fuck” — or face fines of $250-per-day. That’s according to reports by NJ Advance Media.

As previously reported by Law&Crime, Roselle Park Municipal Court Judge Gary Bundy ordered homeowner Patricia Dilascio to remove the signs, reasoning that they violated a borough ordinance prohibiting obscenities. The signs — which include the phrases “Fuck Biden and fuck you for voting for him” and “Fuck Biden, not my president” — were put up by Dilascio’s daughter, Andrea Dick.

“This is not a case about politics. It is a case, pure and simple, about language,” Bundy wrote in the opinion. “This ordinance does not restrict political speech. Neither this town or its laws may abridge or eliminate Ms. Dilascio’s freedom of speech. However, freedom of speech is not simply an absolute right. It is clear from state law and statutes that we cannot simply put up the umbrella of the First Amendment and say everything and anything is protected speech.”

But Dilascio and Dick have refused to abide by Bundy’s ruling — which many legal experts criticized as being blatantly unconstitutional — and are appealing the fines to the Union County Superior Court with the help of the ACLU.

The ordinance at issue prohibits homeowners from displaying “any obscene material, communication or performance or other article or item which is obscene within the Borough.”  “Obscene” is defined as “any material, communication or performance” that would be considered as appealing to “prurient interest,” that describes or depicts sexual conduct, and that lacks any “serious literary, artistic, political or scientific value.”

“All New Jerseyans have the right to express themselves freely under the First Amendment,” LoCicero told NJ Advance Media. “Roselle Park’s ordinance against posting obscene signs should never have been applied to political signs.”

According to NJ Advance Media, the ACLU on Thursday filed court documents seeking to block enforcement of Bundy’s order until after the Superior Court appeal is adjudicated.

The court ruled that Dilascio and Dick won’t have to pay the fines on a daily basis. Rather, the amount owed will continue to accrue so long as the signs with the word “fuck” stay up.

Dick told NJ Advance Media on Friday that she has not removed the signs and promised to take the case all the way to the New Jersey Supreme Court if necessary.

Dick and the ACLU appear to have a solid case that the signs constitute protected speech under U.S. Supreme Court precedent set in the landmark 1971 case Cohen v. California. In that case, a man protesting the Vietnam War was charged with a violating a “breach of peace” statute for wearing a jacket that said “FUCK THE DRAFT. STOP THE WAR.”

Holding that “one man’s vulgarity is another’s lyric,” the nation’s high court ruled that the government cannot regulate an individual’s right to use curse words to protect public morality.

The debate over such signs is beginning to occur in other jurisdictions as well.  A police chief in the Upstate New York Village of Fort Edward, which is near the Vermont border, said there was nothing he could do about similar signs in his jurisdiction given the First Amendment’s protection of even vulgar speech.

“We live in this country, and we love having our freedoms, but at the same time, I can understand the other side where people are upset,” Fort Edward Police Chief Justin Derway told Albany, N.Y. NBC affiliate WNYT-TV.