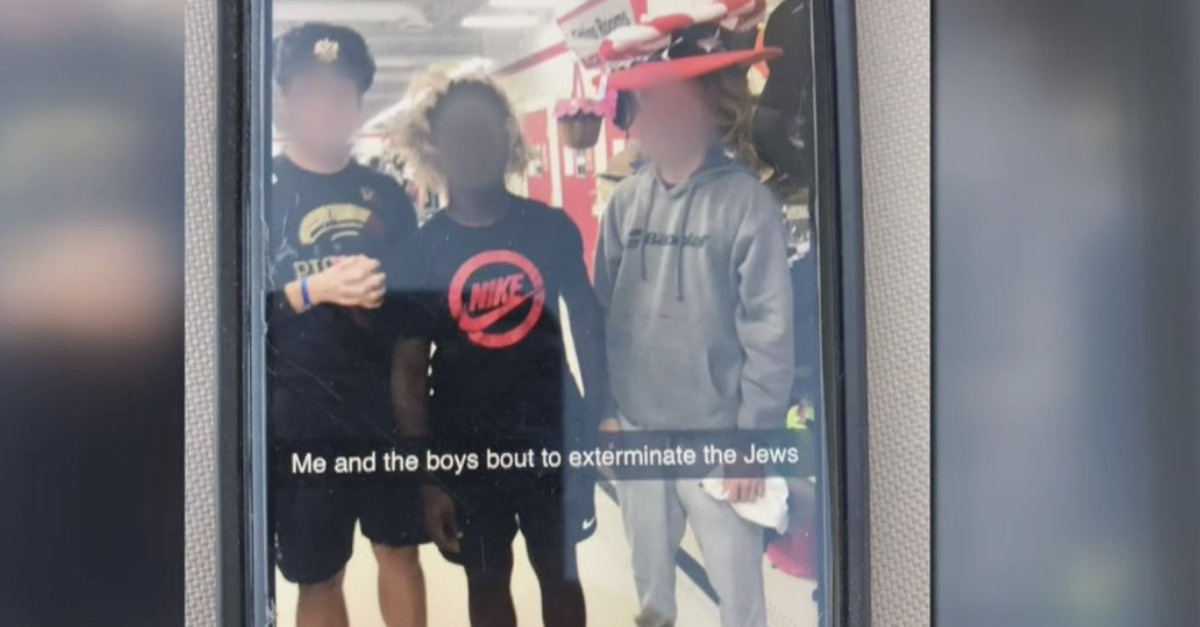 A federal appeals court has sided with a student whose social media post showed him wearing a Nazi-style hat along with a caption saying he was ready to “exterminate the Jews.”

The U.S. Court of Appeals for the 10th Circuit ruled July 6 that a high school student known in court documents as C.G. could sue the school district that expelled him after the teen made an offensive post on Snapchat.

C.G. had been out shopping with friends at a thrift store on a Friday evening in September of 2019. After coming upon a hat that resembled a World War II military hat, C.G. posted a photo of himself and friends wearing wigs and hats. The caption, which accompanied the photo posted to C.G.’s Snapchat story, said, “Me and the boys bout [sic] to exterminate some Jews.”

Snapchat stories disappear on their own after 24 hours. However, a few hours after C.G.’s original post, he took down the story and made a new post which read, “I’m sorry for that picture it was ment [sic] to be a joke.”

A fellow Snapchat user had already taken a screenshot of C.G.’s “extermination” post and reported C.G.’s activities to Cherry Creek High School near Denver, Colorado. In response, the school suspended C.G. while it conducted an investigation. That investigation culminated in an expulsion hearing, and ultimately, in a one-year expulsion for C.G.

C.G. then brought a civil rights case under 42 U.S.C. § 1983 against the school district and several district officials for violation of his First Amendment rights. According to C.G.’s civil complaint, the Arapahoe County Sheriff’s Office also investigated the social media post, but “the investigating officer quickly concluded that the caption was intended as a joke” and took no further action after realizing that “C.G. was not a threat to anyone.”

The district court granted the school district’s motion to dismiss. U.S. District Judge Richard Brooke Jackson, a Barack Obama appointee, wrote in the court’s order that “[t]he modern reality of social media is that off-campus electronic speech regularly finds its way into schools and can disrupt the learning environment.” Because of this potential for disruption, a school district may well be within its rights to regulate students’ off-campus speech, the order says.

Jackson found that while C.G. did not intend the post as a legitimate threat, “many students and parents did take it as serious anti-Semitic hate speech.” After the post spread among the Jewish community, one student’s parent contacted the school to say that it “‘generate[d] fear, anger, and sadness’ for her son.” In the days that would follow, multiple news outlets ran stories about C.G.’s post, more parents called with concerns, and the school held an advisory period — a 30-minute meeting normally held to discuss administrative issues — to address the post.

The district court reasoned that because of this disruption, the school had the authority to discipline C.G. for his Snapchat post.

However, on appeal, a three-judge panel of the 10th Circuit reversed. The panel included Justices Paul Joseph Kelly, a George H.W. Bush appointee), and Scott Matheson and Carolyn McHugh, both Barack Obama appointees.  The court found that although C.G.’s post may have contained potentially “hateful” speech, his right to post it is protected by the First Amendment.

In its decision, the panel relied heavily on the Supreme Court’s June 2021 ruling in Mahanoy Area School District v. B.L., the case of a high school cheerleader who was disciplined by her school after she posted, “Fuck school fuck softball fuck cheer fuck everything.”

Justice Kelly wrote the opinion for the 10th Circuit. Kelly said that “like the school in Mahanoy, CCHS’s possible interests in prohibiting C.G.’s speech would not defeat his First Amendment protections.” He reasoned that the recent ruling “is clear that schools may not invoke the doctrine to justify regulating off-campus speech in normal circumstances.” Further, the results that the school reported — calls from parents, media coverage, etc. — did not constitute the kind of “substantial disruption” necessary to justify the school’s actions.

Kelly pointed out that C.G.’s post did not contain weapons, specific threats, or speech directed toward the school or its students. “C.G.’s speech would generally receive First Amendment protection because it does not constitute a true threat, fighting words, or obscenity,” Kelly wrote.

The court also ruled that “simply invoking the words ‘harass’ and ‘hate’ when C.G.’s speech does not constitute harassment” does not render the teen’s speech regulable.

The school district argued that C.G.’s post “is uniquely regulable because it is ‘hate speech targeting the Jewish community’ and ‘not just a crude attempt at a joke about the Holocaust.'”

The 10th Circuit also considered the school district’s claim that it has qualified immunity. As Law&Crime has previously explained, “qualified immunity” is a judge-created concept that shields federal and state officials from liability in civil lawsuits by requiring plaintiffs to show they were deprived of a right that is either specifically codified by statute or else “clearly established” by case law.

The appellate court remanded the case to the district court to rule on the issue of qualified immunity.

Attorney Jon Fero, co-counsel  for Cherry Creek School District in this case, provided the following statement to Law&Crime via email:

Cherry Creek School District is committed to providing a safe and equitable learning environment in which all students have the opportunity to receive a world class education free from harassment. Former student CG was disciplined after posting disruptive hate speech targeting the Jewish community. The District maintains that discipline was both lawful and appropriate, and it will continue to vigorously defend CG’s lawsuit.

Jamie Hubbard, an attorney for C.G., responded to Law&Crime’s request for comment with the following:

The Tenth Circuit’s decision recognizes that the First Amendment protects young people’s speech and conduct when they are away from school. The decision is about much more than my client’s impulsive and misguided attempt at dark humor; it will allow students the freedom to attend protests, participate in their communities, and voice their concerns on digital platforms that serve as the modern version of the proverbial town square. We look forward to continuing this litigation in the district court and vindicating my client’s First Amendment and Due Process rights.

Read the court paperwork below:

[Editor’s note:  this piece has been updated to include a statement from Jamie Hubbard.]