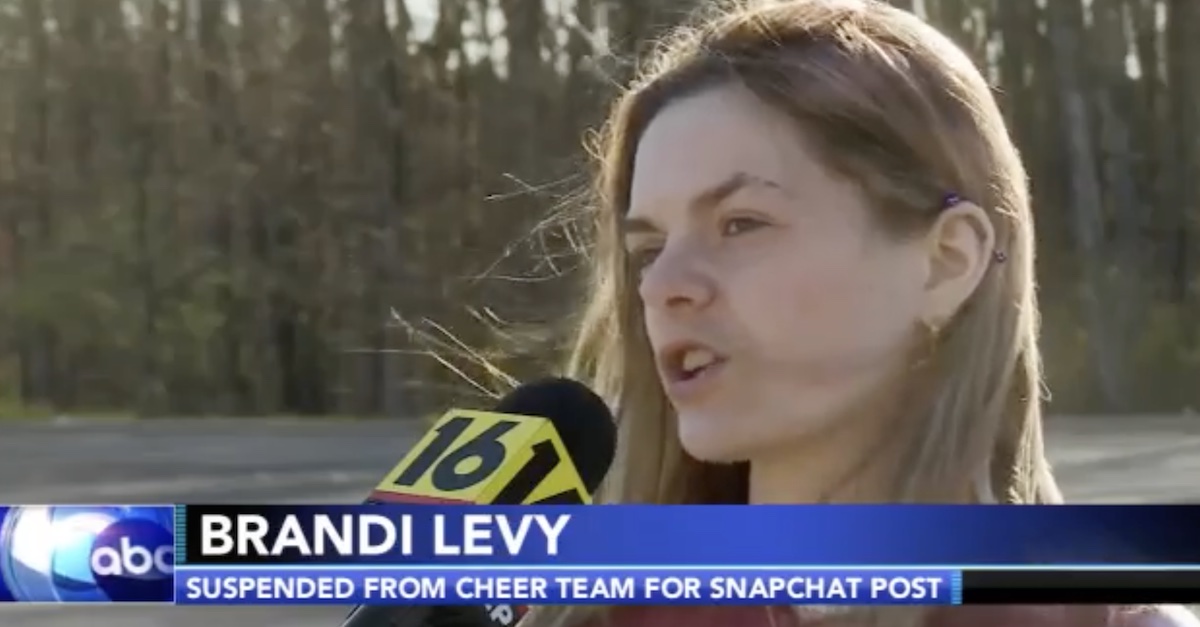 The justices of the Supreme Court, except for Justice Clarence Thomas, sided with Brandi Levy, a high school cheerleader who was suspended from the junior varsity squad for a year after dropping multiple F-bombs on Snapchat.

The teen, frustrated that she did not make the varsity team, posted a picture of herself and a friend in a Snapchat story. The picture showed both girls with middle fingers extended and the caption “Fuck school fuck softball fuck cheer fuck everything.” A second post said, “Love how me and [another student] get told we need a year of jv before we make varsity but that’s [sic] doesn’t matter to anyone else?”

When the post came to the school’s attention, Levy was suspended from the junior varsity team. Levy’s parents appealed the school’s decision on her behalf, but the athletic director, school principal, district superintendent, and school board all sided with the Mahanoy Area School District in Pennsylvania. Levy’s parents then filed a First Amendment lawsuit, and they won both in district court and at the Third Circuit. Levy had previously only been identified as B.L., but she has appeared on the news and given her name.

The Supreme Court faced the question of how to protect the free speech rights of kids while not entirely stripping schools of all power to regulate disruptive behavior like harassment and bullying. In this case, the high court sided with Levy’s free expression. The holding:

“A public high school student used, and transmitted to her Snapchat friends, vulgar language and gestures criticizing both the school and the school’s cheerleading team. The student’s speech took place outside of school hours and away from the school’s campus. In response, the school suspended the student for a year from the cheerleading team. We must decide whether the Court of Appeals for the Third Circuit correctly held that the school’s decision violated the First Amendment,” Justice Stephen Breyer’s majority opinion began. “Although we do not agree with the reasoning of the Third Circuit panel’s majority, we do agree with its conclusion that the school’s disciplinary action violated the First Amendment.”

“Consider B. L.’s speech. Putting aside the vulgar language, the listener would hear criticism, of the team, the team’s coaches, and the school—in a word or two, criticism of the rules of a community of which B. L. forms a part. This criticism did not involve features that would place it outside the First Amendment’s ordinary protection. B. L.’s posts, while crude, did not amount to fighting words,” the opinion continued. “And while B. L. used vulgarity, her speech was not obscene as this Court has understood that term. To the contrary, B. L. uttered the kind of pure speech to which, were she an adult, the First Amendment would provide strong protection.”

The court noted that the speech occurred outside of a school setting and was not targeted at any individual, thereby diminishing the school’s interest in punishing Levy:

Consider too when, where, and how B. L. spoke. Her posts appeared outside of school hours from a location outside the school. She did not identify the school in her posts or target any member of the school community with vulgar or abusive language. B. L. also transmitted her speech through a personal cellphone, to an audience consisting of her private circle of Snapchat friends. These features of her speech, while risking transmission to the school itself, nonetheless (for reasons we have just explained, supra, at 7–8) diminish the school’s interest in punishing B. L.’s utterance.

Breyer said that although “[i]t might be tempting to dismiss B. L.’s words as unworthy of the robust First Amendment protections,” sometimes it is “necessary to protect the superfluous in order to preserve the necessary.”

But Justice Thomas said his colleagues ignored the “historical rule” for situations like this and reached a wrong result that stands on an unstable foundation.

“The Court transparently takes a common-law approach to today’s decision. In effect, it states just one rule: Schools can regulate speech less often when that speech occurs off campus. It then identifies this case as an ‘example’ and ‘leav[es] for future cases’ the job of developing this new common-law doctrine. But the Court’s foundation is untethered from anything stable, and courts (and schools) will almost certainly be at a loss as to what exactly the Court’s opinion today means,” Thomas dissented. “Perhaps there are good constitutional reasons to depart from the historical rule, and perhaps this Court and lower courts will identify and explain these reasons in the future. But because the Court does not do so today, and because it reaches the wrong result under the appropriate historical test, I respectfully dissent.”

UPenn Professor Sigal Ben-Porath has written a book titled “Free Speech on Campus,” teaches in the university’s Graduate School of Education and is an affiliated member of the University of Pennsylvania Carey Law School’s Institute for Law and Philosophy. She said that the Supreme Court’s decision sends a “strong statement” in support of the First Amendment.

“The court sided with the cheerleader, with Thomas the sole justice dissenting, suggesting that the vulgarity is reason enough for punishment. The school, Justice Breyer’s opinion states, sometimes has a special interest in regulating speech that consists of ‘fighting words’ or obscenities. But the school also has an interest in protecting her speech, because public schools are ‘the nurseries of democracy,’” Ben-Porath said in a statement to Law&Crime. “This is a strong statement by the court in support of student speech rights, and advocates of free speech should welcome it, no matter their stance on 4-letter words.”

The professor backed an amicus brief in the case.