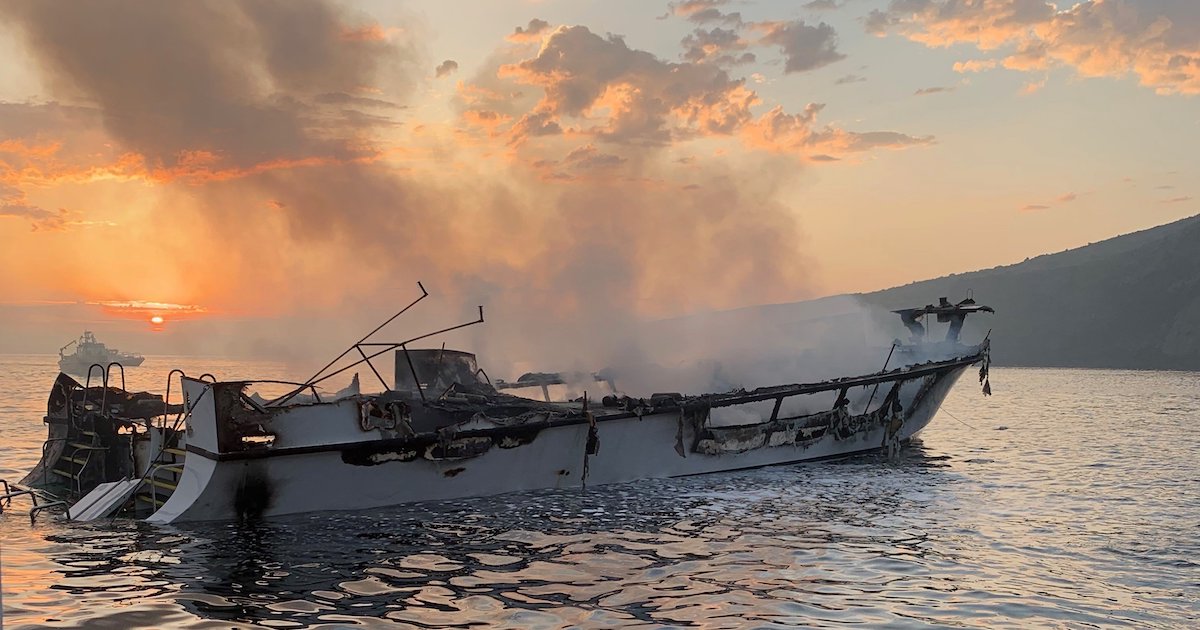 The Conception boat after a fire killed 34 people in September 2019. (photo via Ventura County Fire Department)

A federal judge has dismissed 34 manslaughter charges against the captain of the Conception boat that caught fire during a weekend diving trip off the California coast in 2019, killing one crew member and all 33 passengers.

The indictment against Jerry Nehl Boylan accused him of causing the deaths of the 34 people “by his misconduct, negligence, and inattention to his duties,” including failing to have someone awake at night watching the boat or rotating shifts through a roving patrol, as required by federal regulations and the boat’s U.S. Coast Guard certification.

But it didn’t accuse Boylan of acting with gross negligence, a legal element that U.S. District Judge George H. Wu concluded is required to justify a charge of seaman’s manslaughter under federal maritime law.

Wu, a 2007 Bush appointee, granted a dismissal motion brought by Boylan’s public defenders, who said though the statute doesn’t not explicitly require gross negligence, “under a long line of Ninth Circuit decisions,” it does. He did so on the eve of the third anniversary of the Sept. 2, 2019, tragedy, which occurred as the boat was anchored overnight at a harbor on Santa Cruz Island, near Santa Barbara.

Thom Mzorek, a spokesman for the U.S. Attorney’s Office in Los Angeles, said prosecutors will discuss with U.S. Department of Justice officials in Washington, D.C., about whether to appeal Wu’s order. The judge issued it without prejudice, meaning prosecutors can seek another indictment, but given his analysis of the significance of gross negligence, any new indictment will face the same fate unless it includes new negligence allegations against Boylan. Instead, prosecutors’ most likely chance at a successful prosecution hinges on appealing Wu’s order, which acknowledges the murky caselaw regarding a seldom-litigated area of law.

A 12-page tentative order, which the judge formally adopted as his order during a hearing last Thursday, details several appellate cases in different circuits. It also draws from case law regarding the 18 U.S.C. 1112 federal manslaughter statute, which is different from the statute for seaman’s manslaughter, which was brought under 18 U.S.C. 1115 misconduct or neglect of ship officers statute.

“Neither statute facially requires gross negligence, but common-law understandings incorporate that requirement into an involuntary manslaughter charge under Section 1112,” Wu wrote. “The Government itself has described its charge against Defendant under Section 1115 as “Seaman’s Manslaughter,” but has been unable to convincingly explain why a similar incorporation of common-law understandings should not occur under that statute.”

The judge recognized the real-world implications of his caselaw research, writing that the issue before him “is an important question, not just an academic one.”

Announced in December 2020, the indictment listed three violations by the-then 67-year-old Boylan: Failing to have a night patrol, failing to sufficiently train crew and failing to hold fire drills. But his lawyers said the regulations are civil ones and can’t be considered in a criminal case, asking Wu to strike them from the indictment “because they are highly confusing and therefore prejudicial.”

“If the jury were exposed to the indictment as currently written, it would be given the confusing impression that Mr. Boylan is being charged criminally with violating the three regulations,” according to the motion from deputy public defenders Georgina Wakefield, Gabriela Rivera, Julia Deixler and Joshua D. Weiss. “Indeed, several media outlets have drawn that conclusion about the charge.”

Prosecutors said in their opposition that the argument from Boylan’s lawyers had a “fatal flaw” because each of the three civil violations is “directly relevant to the government’s case.”

“The regulations cited in the Indictment are the most direct and objective basis for the government to prove defendant’s safety duties regarding the fire, and hence how he disregarded those duties,” according to the brief from assistant U.S. attorneys Mark Willams, Joseph Johns and Matthew O’Brien.

They also defended their decision to indict Boylan based on only simple negligence instead of gross negligence, saying it’s supported by the direct language of the 1115 statute. They called the Conception fire “a preventable tragedy,” and said without Boylan’s conduct, “the Conception’s 33 passengers and youngest crew member likely would still be alive.”

Documents describe how a crew member awoke to the fire after going to bed around 2:30 a.m. Boylan is said to have yelled “abandon ship” or “everybody out” as four crew members struggled to access a fire extinguisher and access the sleeping area where their coworker and 33 passengers had been sleeping. They also describe various missteps such as a crew member passing by a fire hose twice but not realizing it was there.

Boylan placed two distress calls to the U.S. Coast Guard at 3:14 a.m., then “was the first to jump in the water; he did not lower himself onto the main deck, but instead jumped directly from the wheelhouse,” according to prosecutors’ opposition to the dismissal motion. “There is no evidence that defendant ever attempted to grab the fire ax or fire extinguisher in the wheelhouse or otherwise attempt to fight the fire before abandoning ship. Nor did defendant use the Conception’s PA system to alert the passengers about the fire.”

The other crew members, one of whom had broken his leg, jumped into the ocean after seeing Boylan abandon the ship, prosecutors said. One crew member lowered a skiff rescue boat that the men piloted toward a sailboat called the Grape Escape, which had people onboard who helped them.

Families of the victims have sued Truth Aquatics, Inc., the diving company that operated the Conception, as well as the boat’s owners, Glen Fritzler and Dana Fritzler. The cases are in Los Angeles County Superior Court under an amended mast complaint filed last November. There also is a similar federal lawsuit against the U.S. Coast Guard.

The victims of the boat fire were: