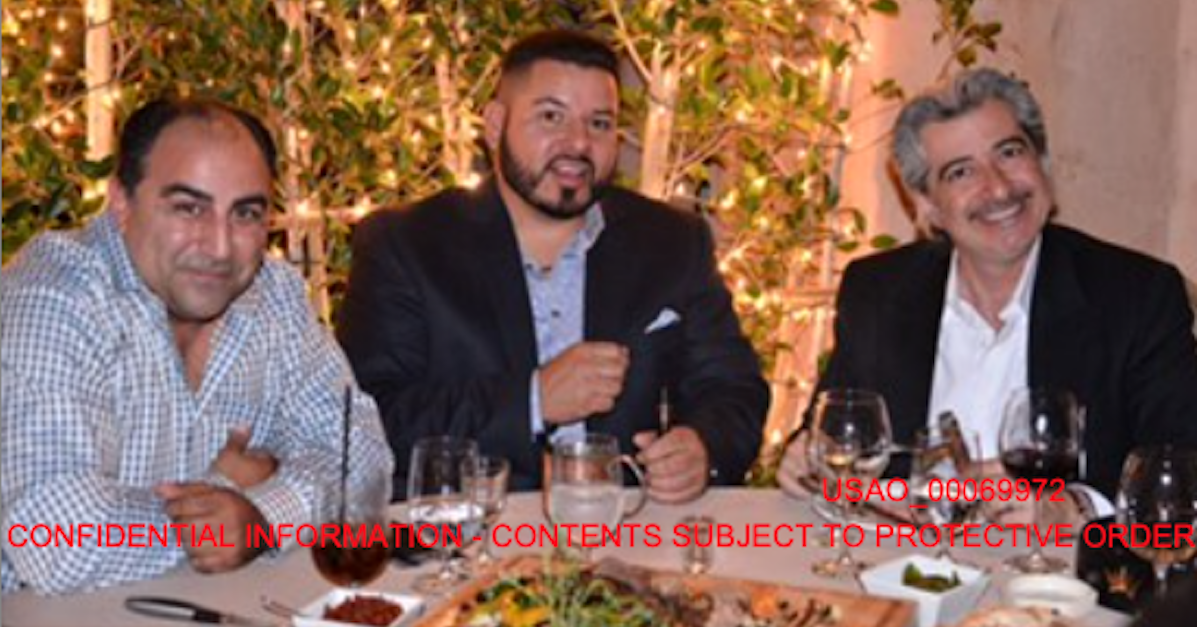 Jurors deciding the fate of a federal agent accused of selling secret information to an organized crime syndicate will hear of a key prosecution witness’ fraudulently obtained attorney credentials after a last-minute revelation rocked an already sensational trial in Los Angeles.

Former FBI Special Agent Babak Broumand is accused of helping corrupt attorney Edgar Sargsyan avoid “law enforcement detection and monitoring” through a bribery scheme that provided secret information in exchange for cash and gifts, including escorts and a Ducati motorcycle, according to a trial memorandum from the U.S. Attorney’s Office.

A licensed lawyer in California since 2016, Sargasyan already is suspended from practicing after he pleaded guilty in July 2020 to five federal felonies related to the scheme. But last week, the prosecutors who plan to call him as a star witness against Broumand revealed that Sargasyan had confessed to fraudulently obtaining his law license by paying an already licensed lawyer to pass the California State Bar examination in his name.

Broumand’s lawyer, Steven F. Gruel, called the revelation a “bombshell” that “goes to the very heart of our legal system” in an emergency motion calling for the trial to be delayed. Sargasyan told prosecutors about it while also describing how the Los Angeles law firm he worked with to obtain his license was a sham that misused client money, according to Gruel, and prosecutors told Gruel about it because of caselaw establishing that prosecutors must disclose information that could discredit witnesses or otherwise exculpate a defendant.

“Why the government hasn’t torn-up E.S.’s cooperation plea agreement and moved to remand E.S. into custody is absolutely shocking,” Gruel wrote in the Sept. 13 motion. “Apparently, a criminal cooperator can lie for over 5 years to the Los Angeles United States Attorney with impunity.”

U.S. District Judge R. Gary Klausner agreed to delay the trial one week, then ruled that Sargasyan can be questioned about the timing of his admission, and its proximity to what he thought was the trial date. Klausner issued that order after prosecutors asked that he bar Gruel from referencing the previous trial date in front of the jury. Opening statements were Tuesday, and Sargasyan took the stand today.

The last-minute dustup began what was already expected to be an intriguing five to seven days of testimony, with Broumand’s case connected to the case of ex-Homeland Security Investigations Special Agent Felix Cisneros Jr., whom a jury convicted in May of 30 felonies for a bribery scheme with Sargasyan. Cisneros is awaiting sentencing.

Meanwhile, John Saro Balian, a former police detective in the Los Angeles County suburb of Glendale, was sentenced in 2019 to 18 months in prison after pleading guilty to bribery, obstruction and false statements charges related to inside information he provided to the Mexican Mafia and his lies to federal agents about his relations to the Mafia as well as organized crime connected to the Armenian Mafia.

Balian knew both Cisneros and Broumand, according to court documents, with Sargasyan testifying in Cisnero’s trial that he paid Broumand to search law enforcement databases just like he paid Cisneros to do. Most of Broumand’s bribes were paid in cash, according to prosecutors, sans one $30,000 payment he received as a cashier’s check payable to a hair lice treatment business he owned with his wife called Love Bugs LLC. His six-count indictment says he committed the crimes between 2015 and 2018 while assigned to an FBI national security team in San Francisco. He’d been an agent since 1999.

Sargasyan also testified that Balian, Ciseneros and Broumand flew to Las Vegas on his private jet in 2016 and he “paid for everybody” because they “were law enforcement people.” Further, Sargasyan testified that Balian, Ciseneros and Broumand joined him at the Grand Havana Room, a members-only cigar lounge in Beverly Hills, in May 2016 to celebrate his passing of the California bar exam. Prosecutors included photos from both gatherings as exhibits. 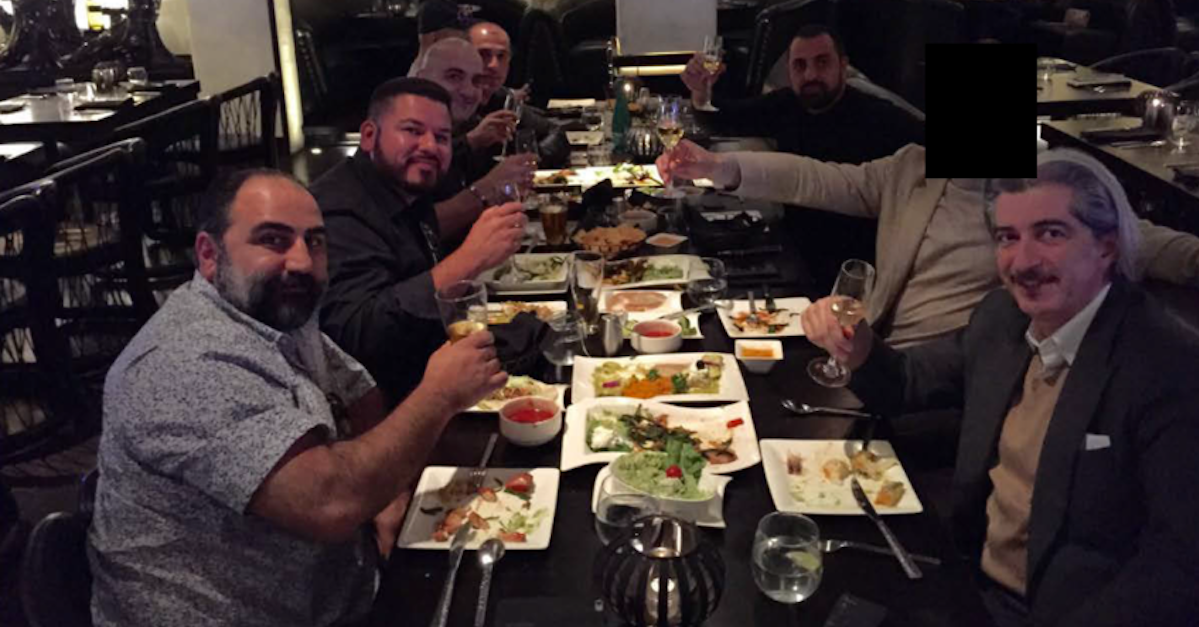 The cigar lounge celebration appears to have contributed to Broumand’s undoing: Court documents describe how Broumand grew worried Cisneros was under investigation, so he ran Cisneros’ name through a confidential FBI database and learned there indeed was an active corruption investigation into him. Broumand contacted the lead investigators “as a ruse” to explain why he’d searched Cisneros’s name, saying he had a “sixth sense” about Cisneros after interacting with him at party and had a “sixth sense” about him. Broumand ended up writing a report for the investigator in which he lied about only meeting Cisneros twice before and acted as though he didn’t know Balian, prosecutors said, even though all three had recently flown to Vegas on Sargasyan’s private jet. Broumand was arrested in April 2020.

Sargasyan has not yet been sentenced, and his April 2020 plea deal says prosecutors can recommend a a sentence below guidelines if they wish. His cooperation could play a big role in that: He was a key witness in Cisnero’s trial just as he’s to be in Broumand’s trial, though no one knew of his claims regarding his state bar exam fraud during Cisnero’s trial so Cisnero’s lawyers never got a chance to use it to try to impeach his credibility.

Gruel, a former assistant U.S. attorney who has his own office in San Francisco, called the information “extremely relevant” when opposing prosecutors’ request to bar him from mentioning the trial rescheduling. Gruel said the request is “damage control” as prosectors are “still reeling from informant E.S.’s monumental September 12, 2022, midnight hour confession that he defrauded the California State Bar in a well-orchestrated scheme.”

“It is highly relevant that E.S. waited to what he thought was the last possible moment (10 hours before the start of trial) to drop his “bombshell” of lies onto the prosecutors, the defense and the Court,” Gruel wrote. “In fact, the timing of E.S.’s confession (10 hours before trial) is cleverly calculated by him. E.S. clearly waited until the last possible moment so as to afford little or no time for the prosecution or defense to react and fully explore the scope of E.S.’s wrongdoing.”

One of the key people prosecutors say Broumand obtained law enforcement information on was Levon Termendzhyan, an Armenian organized crime figure with close ties to Sargasyan.

Also known as Lev Aslan Dermen, Termendzhyan was convicted in March 2020 by a federal jury in Salt Lake City for crimes related to a $1 billion renewable fuel tax credit fraud scheme involving Utah polygamists. He has not yet been sentenced as his lawyers, including well-known Los Angeles lawyer Mark Geragos, pursue post-trial litigation, including newly disclosed information about a prosecution witness.

Broumond is being prosecuted by assistant U.S. attorneys Ruth C. Pinkel, Michael J. Morse and Juan M. Rodriguez. He is out of jail on bond.

Read their trial memorandum below.