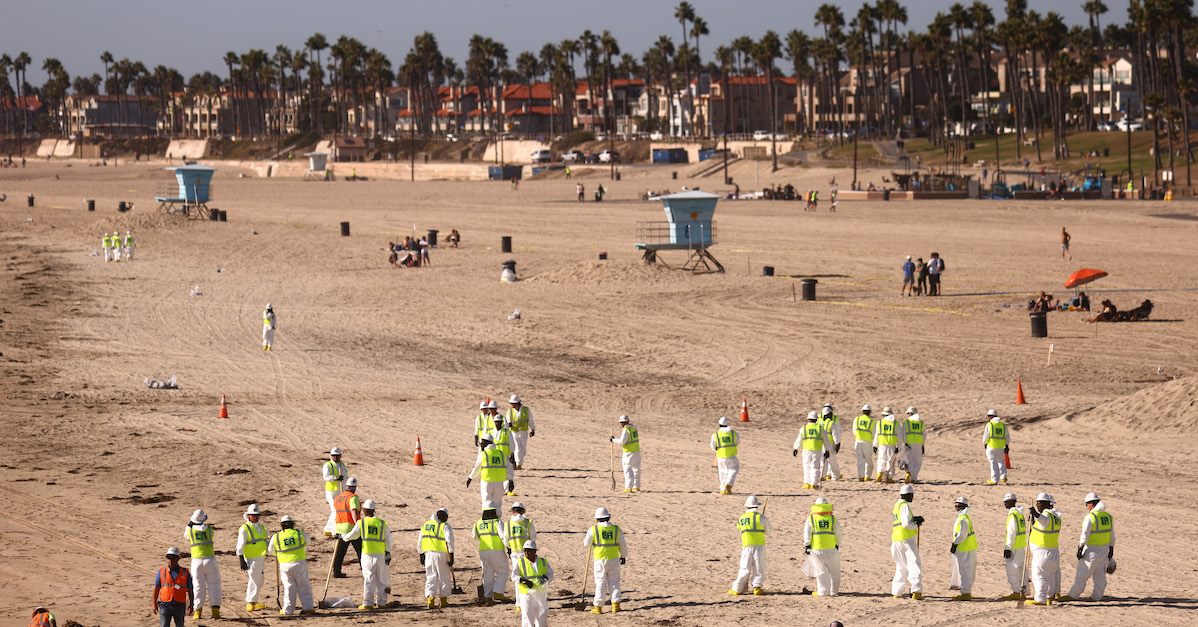 Cleanup workers search for contaminated sand and seaweed on a mostly empty Huntington Beach about one week after an oil spill from an offshore oil platform on October 9, 2021 in Huntington Beach, California. The heavy crude oil spill affected close to 25 miles of coastline in Orange County. (Photo by Mario Tama/Getty Images)

A Texas oil company and two subsidiaries will plead guilty to a misdemeanor for a 25,000-gallon oil spill off the coast of Southern California last year, with federal prosecutors announcing the deal the same time lawyers are finalizing a settlement in a proposed class action.

Amplify Energy Corp. is to pay a $7.1 million criminal fine and pay $5.8 million to compensate the U.S. government for work related to the oil that leaked from the San Pedro Pipeline in October 2021, closing beaches and area businesses while harming wildlife.

Details of the tentative civil settlement have not yet been announced, but plaintiff attorneys said the deal won’t include the global shipping companies accused of rupturing the pipeline by accidentally dragging an anchor across the pipeline.

“The proposed resolution, reached through a mediators’ proposal, includes both monetary and injunctive relief,” according to a statement from plaintiffs’ Counsel co-leads Wylie Aitken, Lexi Hazam and Stephen Larson. The settlement must be approved by the presiding judge, U.S. District Judge David O. Carter, who also must approve the plea deals.

The lawyers in the civil case were in Carter’s courtroom discussing the tentative settlement Thursday night until midnight, Aitken told Law&Crime.

“Should the court decide not to accept the plea agreements, any party may withdraw from the agreements and the case would proceed toward trial,” according to a press release from the U.S Attorney’s Office for the Central District of California in Los Angeles.

Along with Amplify, two subsidiaries are pleading guilty, Beta Operating Co. LLC and San Pedro Bay Pipeline Co. The misdemeanor is for violating the federal Clean Water Act, and each entity will plead guilty to one charge. The deal calls for them to be on probation for four years during which they are to compensate the U.S. Coast Guard and other agencies $5,844,700. Friday’s announcement says they’ve already paid $656,500 and notes they “previously paid the vast majority of expenses related to the clean-up of the spill.”

The pipeline ruptured on Oct. 1, 2021, triggering leak detection alarms that were “repeatedly and incorrectly assessed” by employees who closed the pipeline flow several times only to reopen it and dump 588 barrels of crude oil into the Pacific Ocean, about 4.7 miles west of Huntington Beach.

Amplify CEO Martyn Willsher said in a press release that the company “has been committed to working cooperatively with the various agencies investigating this incident.”

“We are committed to safely operating in a way that ensures the protection of the environment and the surrounding communities,” Willsher said.

Amir Ehsaei, the acting assistant director in charge of the FBI’s Los Angeles office, said the guilty pleas “will send a clear message of accountability to companies which rely on our natural resources and will hold them to elevated standards of environmental stewardship.”

Under the probation terms, the companies also are to improve training for all operational employees and related management personnel in identifying and responding to potential pipeline leaks, install a new leak detection system for the pipeline, require notification to regulators of all leak detection alarms, contract with an oil spill response organization that has the capability to detect oil on the surface of the water at night or in low-light conditions that will promptly deploy upon request, conduct visual underwater inspections of the pipeline semiannually and modifications to their pipeline-related procedures that will require financial investment of at least $250,000.

“This oil spill affected numerous people, businesses and organizations who use the Southern California coastal waters,” Christensen said in a press release. “The companies involved are now accepting their responsibility for criminal conduct and are required to make significant improvements that will help prevent future oil spills.”