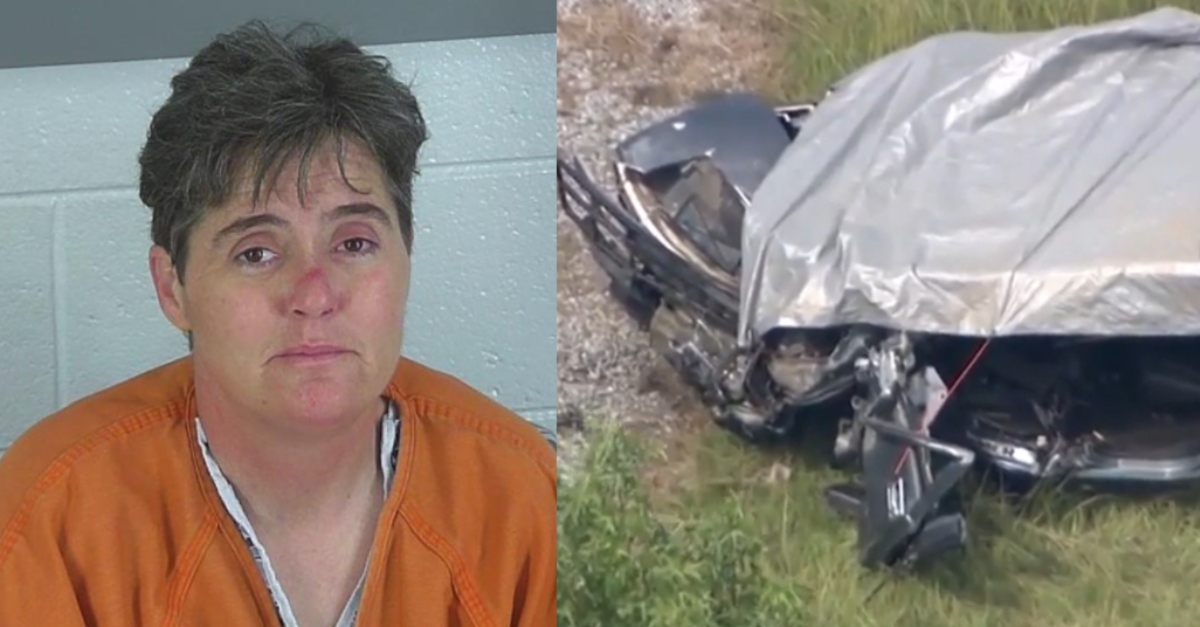 Melissa Ann Parker and the Hummer she allegedly crashed.

A woman killed two young twins and their friend in an overnight wrong-way DUI crash, and instead of staying at the scene, she ran away, according to state troopers in Spartanburg, South Carolina.

Authorities arrested Melissa Ann Parker, 43, of Spartanburg after Elleana Lee Gaddis, 17, her sister Isabella Lee Gaddis, 17, and Brianna Lynn Foster, 18, died in the two-vehicle collision, according to a report by Greenville, S.C. NBC affiliate WYFF-TV. A 17-year-old passenger survived and went to a hospital by ambulance, the report said.

The Gaddis sisters and Foster died at the scene, troopers said. The girls were from Fishers, Indiana, a suburb northeast of Indianapolis.  WISH-TV in Indiana said the crash happened at 2:06 a.m.

Parker had allegedly been driving a 2005 Hummer, and a prosecutor reportedly said she had stolen it before the crash.  She was driving west on the eastbound lanes of Interstate 26, troopers said, when she allegedly struck the girls’ Kia sedan, which was going the correct way.  Authorities described the crash as a head-on collision.  They say Parker ran away from the scene but was caught a short time later. She went to the hospital by ambulance after she was apprehended, reports indicate.

Parker remains at the Spartanburg County Detention Center on charges including three counts of felony DUI with death and felony hit-and-run with personal injury. Jail records indicate she was arrested at 11:56 on Monday.

Melissa Parker, the woman charged with killing three teenagers in a DUI crash early Monday morning, is scheduled for a bond hearing at 11.

I’ll be watching and we’ll have the latest on @WSPA7.

A judge denied Parker bond at a hearing on Tuesday. A prosecutor said in court that Parker stole that Hummer from a gas station and sped down I-26 the wrong way, according to WSPA-TV reporter Henry Coburn.

According to solicitor, Parker stole the Hummer from a gas station before speeding down I-26 the wrong way. The solicitor says she was going at least 79 mph when she hit the second vehicle head-on. Two 17-year-old sisters and their 18-year-old friend were killed.

Incredibly emotional testimony from the girls’ families and the lone survivor. They were 10 minutes from reaching their hotel when the crash occurred. @WSPA7

The girls had reportedly been on a beach trip.  WISH-TV said it was “unclear” if they were wearing seat belts.